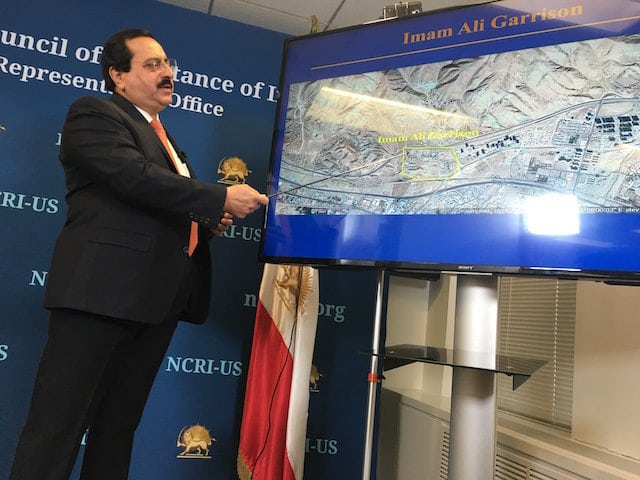 WASHINGTON, D.C. — For the first time, on Tuesday, a group of Iranian dissidents revealed an intelligence report specifying the scope of terrorist training camps run by the Iranian Revolutionary Guard Corps (IRGC) and Quds Forces within Iran, and called on the Trump administration to designate the group as a terrorist organization.

The National Council of Resistance of Iran (NCRI) report detailed information about the camp’s alleged locations, the countries they poach recruits from, and the structure of the camps themselves. Members of the People’s Mojahedin Organization of Iran (PMOI), collected the information within Iran about the IRGC and Quds Forces. Alireza Jafazadeh, deputy director of the NCRI’s Washington office, presented the information.

“The IRGC is actually the entity that runs the whole show when it comes to terrorism,” Jafarzadeh said. “You cannot do the separation. You cannot have the Quds Force designated as a terrorist entity, but not the IRGC,” he added, noting that the two are “essentially the same entity.” He explained how Iran is training Afghani and Pakistani recruits and bringing them to Syria and Iraq.

The report states that “every month, hundreds of forces from Iraq, Syria, Yemen, Afghanistan, and Lebanon – countries where the regime is involved in frontline combat – receive military training and are subsequently dispatched to wage terrorism and war.” The IRGC reportedly also recruits people from Shiite-majority but Sunni-governed Bahrain,

Since 2012, the IRGC has invested more into its terrorist camps for the purpose of training foreign nationals for deployment into the Persian Gulf – as well as Asian, African, and Latin American countries – where the regime seeks to continue expanding its influence. Breitbart News has previously reported on the Iranian regime’s terrorist activities in Latin America.

The report identifies fourteen IRGC and Quds Forces training camps throughout Iran, which belong to the “Training Directorate.” Eight of them are allegedly are located in Tehran. These camps are designed first to indoctrinate, and then train, foreign nationals as fighters to carry out the mission of the IRGC and the Iranian regime, which seeks a caliphate of its own, concludes the report.

Although the report only mentions fourteen terrorist training camps, they are likely not the only ones, and the number of such camps confirmed to exist may increase in the coming months.

Earlier this month, reports surfaced that President Donald Trump’s administration may designate the IRGC as a terrorist organization. Tuesday’s revelations could act as a catalyst to expedite the move.

According to NCRI’s report, IRGC terrorist trainees first are sent for ideological indoctrination at the Imam Ali Academy in Tajrish, Tehran. After that, Iran sends them to one of these camps for training in specific areas:

These bases are reportedly divided based on the nationality of the trainees and the type of training conducted. Each month, hundreds of forces from Iraq, Syria, Yemen, Lebanon and Afghanistan are dispatched after receiving training. The intelligence report indicated that, since 2012, the extent of training of foreign mercenaries in IRGC-controlled camps of Quds Force has increased.

Jafarzadeh noted that the largest contingent of trained fighters come from Imam Ali Garrison. That camp alone reportedly sends 2,000 Afghans to Syria every week; Syria receives the largest concentration of these trainees overall.

For the first time, the location details for one of the training camps, Imam Ali Garrison, was made public. Situated in the northeast of Tehran, the Imam Ali Garrison is located at kilometer 20 of the Tehran-Karaj Highway on Ardestani Boulevard, which is close to the end of Saravan Street, according to the NCRI.

Jafarzadeh said fighters are “kept in isolation, so they don’t reveal or share information with each other.” He noted that in recent years, the IRGC has been bringing agents from Latin America, Venezuela, Uruguay, Paraguay and Bolivia back to Iran to retrain them in the areas of specialized training for heavy weaponry, missile launch training, marine training and paratrooper training.

“The IRGC must be designated as an FTO (foreign terrorist organization) without hesitation,” Jafarzadeh said. He placed emphasis on the need for efforts to lead to their expulsion from Syria, Iraq, and Yemen in particular and noted that while “billions of dollars are being spent fighting the Islamic State (ISIS, ISIL) in Iraq,” the “IRGC and its mercenaries are operating freely there.” Jafarzadeh said the IRGC is actually “contributing to the rise of” the Islamic State through its activities.

Jafazadeh said the report was recently made available to the Trump administration and U.S. government. Asked by Breitbart News who within the Democratic and Republican ranks of Congress NCRI has been working with to address the IRGC issue, Jafarzadeh said, “I expect without mentioning any names that we will see more measures from Congress” in the coming weeks.