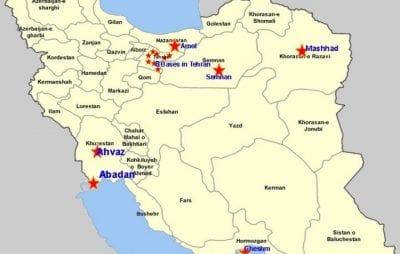 An explosive new report given to the Trump administration could fuel discussions by the president’s inner circle about adding Iran’s Islamic Revolutionary Guard Corps (IRGC) to the official list of foreign terrorist organizations.

Issued by the National Council of Resistance of Iran, the report claims the IRGC has set up at least 14 terrorist training camps across Iran to teach foreign fighters terrorist tactics. According to the report, fighters are streaming in from Afghanistan, Syria, Lebanon and Yemen, all countries where Iran has expanded interests.

This image shows the location of a number of IRGC training garrisons in Iran. (National Council of Resistance of Iran)

Iran already is part of the U.S. State Department’s State Sponsors of Terrorism list, along with Syria and Sudan. However, new calls are coming from leading critics of the regime to designate the IRGC as a foreign terrorist organization – and the Trump administration is said to be considering that.

“The people of Iran would welcome the designation of the IRGC, which is responsible for thousands of political executions and tortures in prison. It is also responsible for training terrorists supporting and engaging in terrorist activities outside Iran,” said Maryam Rajavi, the leader of The National Council of Resistance of Iran, which is the largest Iranian opposition group.

“I believe the time has come for a firm policy on Iran. The failed policy of appeasement has hurt the Iranian people, as well as global peace and security,” she said.

The resistance group used a news conference in Washington, D.C., this week to expose what it says is a new case against the Revolutionary Guard. The report issued by the organization claims the IRGC-sponsored terrorist camps are designed to train fighters from various Middle Eastern nations who could be dispatched in terrorist cells to attack the United States, its Arab allies, and other nations.

“It was the activities of the Iran regime, particularly the Revolutionary Guards Corps, that paved the way for the rise of extremism and sectarian violence in Iraq and Syria. Particularly, it was the IRGC activities that led to the rise of ISIS,” said Alireza Jafarzadeh, deputy director of the council’s Washington office, who first revealed the extent of Iran’s surreptitious nuclear program a decade ago.

“It is part of the regime’s strategy to export terrorism,” he said. “It has the full blessing of the Supreme Leader, Ali Khamenei.”

The group displayed satellite photographs of what it said were the camps, with names like the “Imam Ali Garrison, “the “Lowshan Garrison,” and “Badindeh Garrison.” The group said the foreign recruits are taught various methods of terrorism, including training for heavy weaponry, missile launching, and teaching how to use “Kalashnikovs, machine guns, mortars, tactics, sniper, among others.” At one camp, the group said recruits even learn about the “use of motorcycles for terrorist operations.”

“What you want to do is dry up their resources, and limit their access,” Jafarzadeh said. “You want to send a signal to anyone else in the region that the IRGC is a terrorist organization.”

The Guard was founded during the Islamic revolution in 1979, and continues to play a dominant role in Iran’s economic and security life.

Others, however, caution that designating the Guard as a separate terrorist group could backfire.

“The foreign terrorist organization designation is typically reserved for foreign terrorist organizations, not for governments. We have a state sponsor of terrorism list for governments and Iran is on that list, it really does fit the bill,” noted Joel Rubin, who served as a deputy assistant secretary of state in the Obama administration and is now president of the Washington Strategy Group.

He points out that portions of the IRGC are currently under U.S. sanctions, but that other nations such as Russia, China and the European countries are unlikely to follow suit. Rubin also worries that such a move could harm the U.S. effort against ISIS and put American troops in the region at risk.

This satellite photo shows the position of the Badindeh Garrison in Iran. (The National Council of Resistance of Iran)

“Iranian behavior is weakening many parts of the region and that needs to be pushed back against. The question is how to do it?” he said.

“There is a bigger picture at play here,” Rubin said. “We need to continually call for the Iranian government to treat their people well, and to open up, but the way to do that is not to isolate Iran completely, but to try to put pressure through engagement as we have been doing over the last several years.”

But Rajavi says stronger steps need to be taken to force change in Tehran.

“Our objective is to overthrow the dictatorship ruling Iran, which is the desire of the Iranian people. This must be done by the Iranian people and the Iranian resistance,” she said. “I believe the people of Iran and our movement are capable to bring about change in Iran.

The White House is expected to make a decision on the designation soon.