Protests Against Iranian Regime Grow in Wake of Corruption Scandal 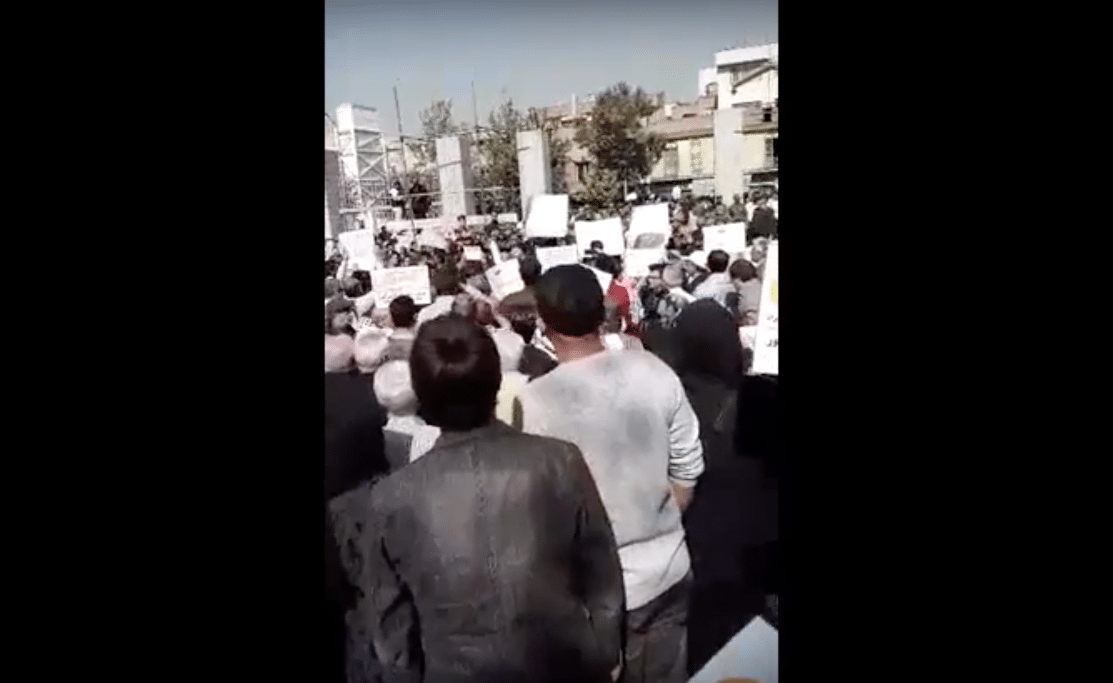 Tehran –More than 2,000 Iranians protested outside the parliament building in Tehran on Monday, October 23, 2017, shouting slogans against the regime officials and condemning the endemic government corruption.

The original outcry was sparked by an economic scandal, as thousands of citizens had invested in government-backed financial firms with the promise of receiving a 30% return on their investment. Instead, they found that they had either lost their money or were unable to collect it.

Many of these firms, which are de facto Ponzi schemes, are approved by the Iranian regime, with some being wholly owned and operated by the Islamic Revolutionary Guard Corps (IRGC), which was recently designated by the U.S. government as a Specially Designated Global Terrorists (SDGT) entity under Executive Order 13224 for their support for terrorism, and subjected to sanctions by the Treasury Department. The people of Iran had invested billions of dollars in these schemes, as there was no other investment opportunity within the country.

The protests began in 2016, but have recently gown in size, duration and intensity and spread across the country to several major cities. They have also become increasingly politicized, as this week’s protestors shouted hostile slogans towards the regime and police forces, including “death to the dictator,” “shame on Rouhani,” and “you are ISIS, death to ISIS.”

Police at the scene clashed with protestors just outside of the gates of parliament, as barriers were broken through and rocks and other objects were hurled at police forces. The protestors called out increasingly aggressive chants as police moved to arrest those at the scene, with some shouting “I will kill the one who killed my brother,” and “Guns, tanks, machine guns are no longer effective.”

One major target of protestors’ anger was Iran’s current Judiciary Chief, Mohammad Sadeq Amoli Larijani. Larijani, appointed by Supreme Leader Ayatollah Khamenei, has been accused of embezzling billions of dollars in secret slush funds. Tuesday’s protestors spoke out against him specifically, chanting “Larjani is a judge, he is the playmate of thieves.”

The whole crisis emanates from the bankruptcy of the country due to government incompetence and rampant corruption. People believe that financial and economic institutions with strong ties to the Supreme leader and the IRGC have been the main beneficiaries of the schemes. Protestors argued that the investment schemes were set up in order to pay back the deficit, as one chant asserted “They had a budget deficit, so they took our money.”

By Wednesday, October 25th, the protests expanded to Ahwaz, in the southern oil-rich province of Khuzestan.  The protesters were chanting, “Leave Syria alone, do something about our plight.” They also chanted, “There is neither justice, nor judgment, Courts are the thieves.”

Senior Syrian Opposition Delegation, NCRI Meet in Washington; Call for the Expulsion of the IRGC and its Proxies From Syria
Comment
Iran: The Issue is Neither the JCPOA Nor A Bomb, but the Regime Itself