OPINION | Iran Perpetuates Terror – Why Not Legally Recognize That? 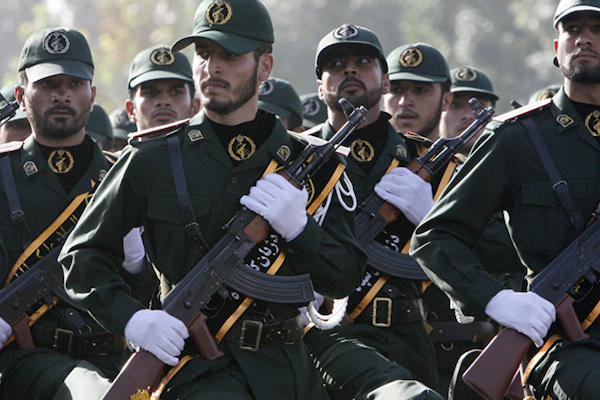 The case for designating the Islamic Revolutionary Guard Corps (IRGC) and the Iranian Intelligence Ministry as Foreign Terrorist Organizations.

Back in 1987, a veteran commander of the Islamic Revolutionary Guard Corps (IRGC), Mohsen Rafiqdoust, threatened the United States. “The US knows that both the TNT (explosives) and the ideology, which in one blast sent to hell 400 [American] officers, NCOs and soldiers of the Marine Headquarters, had been provided by Iran.”

On October 23, 1983, in an IRGC-sponsored terrorist attack, a truck loaded with 18,000 pounds of explosives drove through the barriers at the U.S. Marine barracks in Beirut, Lebanon, killing 241 U.S. servicemen and gravely wounding many more.

The IRGC acts as the Iranian regime’s Praetorian Guard and has two main duties in ensuring the fundamentalist theocracy’s survival: crushing internal dissent and exporting terrorism and violence abroad.

Both the IRGC and its extraterritorial Qods (Jerusalem) Force carry out terrorist operations in various countries around the globe. The IRGC has numerous facilities inside Iran to train terrorists as part of the regime’s strategy to step up its meddling abroad.

There was a sharp surge in Tehran-sponsored terror plots in Europe in 2018, which targeted American citizens as well as Iranian opposition members. Several senior MOIS officials were caught in Europe plotting terror, assassinations, and bombings.i

The IRGC and MOIS meet the criteria to be designated as FTO under section 219 of the Immigration and Nationality Act (8 U.S.C. 1189). There are three criteria for FTO designation. The group has to be a “foreign” organization that “engages in terrorism or terrorist activity or retains the capability and intent to engage in terrorist activity or terrorism,” which “threatens the U.S. nationals of the national security of the United States.” As of today, IRGC and MOIS meet all the three requirements by far, making their FTO designation long overdue.

These designations are not only warranted, but they also would contribute significantly to the fight against terrorism and would send a strong signal to Tehran that the days of getting away with murder are over.

Terrorism has been a very profitable tool in the hands of Tehran’s rulers for the past four decades, enabling the regime to extract concessions from its western interlocutors, and hold as hostage the foreign policy of western nations.

Inaction regarding the IRGC and MOIS has further enabled the regime to set up missile factories in Syria, Lebanon and Iraq in order to broaden its regional sphere of influence.

It is time to push back against such malign behavior.

FTO designation of the IRGC and MOIS would make it illegal for a U.S. person to provide “material support or resources” to these entities including service, expert advice or assistance. The designation would also make members and representatives of IRGC and MOIS inadmissible to and removable from the United States.

Tehran has been sending its MOIS and IRGC agents to the United States over the past decades under different covers.

Iran’s regime has also benefited from the services and “expert advice and assistance” given, at times without realising it, by both the U.S. Government and private citizens, both of which have at times carried the water for the Iranian regime. This is largely thanks to decades of the policy of appeasement by previous U.S. administrations.

This can and must come to an end. The FTO designation of the MOIS and IRGC could act as the first step in that direction.

[Update April 6, 2019: As of publication, the Wall Street Journal has reported that the Trump administration may designate IRGC as a foreign terrorist organization this Monday – Editors]