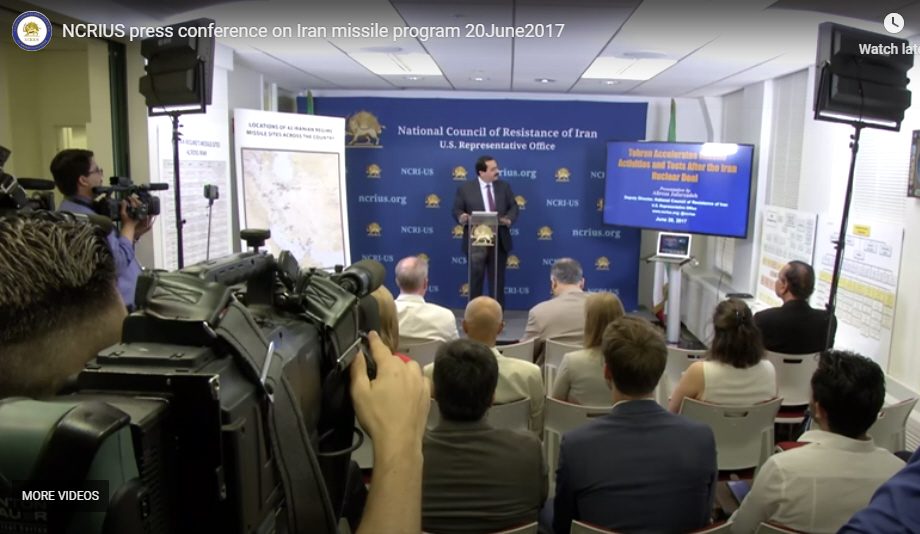 WASHINGTON, DC – On Tuesday, June 20, 2017, the U.S. Representative Office of the Iranian opposition coalition the National Council of Resistance of Iran held a press conference at its Washington DC office to present new information about missile development and testing by the Iranian regime. Alireza Jafarzadeh, the deputy director of the NCRI-US who held the press conference said that Supreme Leader Ali Khamenei had ordered relevant institutions to accelerate missile activities in the aftermath of the nuclear agreement.

The NCRI press conference specified that the IRGC Aerospace Force had been tasked with executing Khamenei’s mandate for accelerated missile work. Drawing on intelligence gathered from its main constituent group the People’s Mojahedin Organization of Iran (PMOI/MEK) from its sources inside of Iran, the NCRI identified 42 centers for the development, manufacture, testing and launching of missiles by the IRGC. It also determined that at least one such center, located in Semnan Province, was actively collaborating with the Organization of Defensive Innovation and Research (Persian abbreviation: SPND), which had previously been exposed as the institution in charge of nuclear weapons-related work.

The NCRI revealed the existence of SPND in 2011, three years before the United States placed the institution on its sanctions list. The implication of SPND in ongoing weapons development is sure to bolster skepticism about Tehran’s commitment to the nuclear agreement, and perhaps also justify additional enforcement measures by the US government.

Alireza Jafarzadeh also highlighted the collaboration of North Korean experts, and that these experts regularly visit Iran and stay at a location specifically allocated for them and the Iranian missile experts also regularly travel to North Korea. [/vc_column_text][/vc_column][/vc_row]