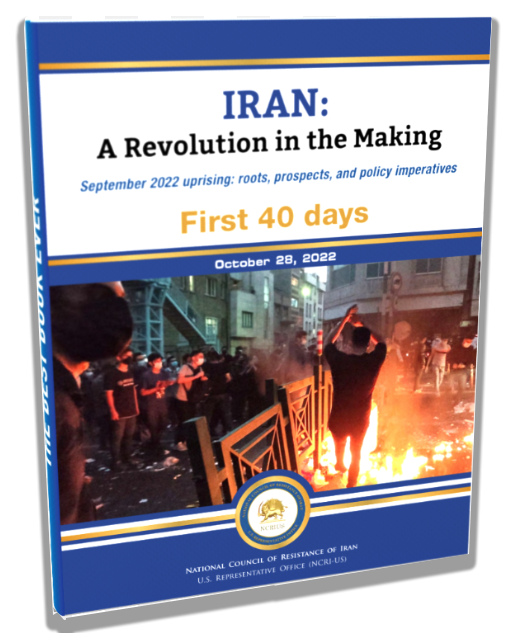 WASHINGTON, DC, October 31, 2022 — The National Council of Resistance of Iran – US Representative Office (NCRI-US) released its most recent publication, entitled, “IRAN : A Revolution in the Making-First 40 Days.” The manuscript is an analytical assessment of the surging protests in Iran. This 20-page white paper, which includes an Overview, gives the facts about the origin and characteristics of the uprising, shows how 43 years of Resistance against the regime has contributed to the ongoing uprising, and offers policy imperatives and the path forward for the International community.

“IRAN: A Revolution in the Making-First 40 Days,” demonstrates that:

— Sparked by the regime’s inhuman treatment of women evident in the murder of 22-year-old Kurdish-Iranian Mahsa (Zhina) Amini, the protests rapidly transformed into a universal call for regime change and a democratic revolution and are distinguished from past uprisings, by the leading role played by women and youth – particularly university and high scroll students – and supported by all of the Iranian population.

— The protests are at a point of no return and have dealt a major strategic blow to the Iranian regime, from which it cannot recover.

— The message of the protesters all over Iran is unified on the overthrow of the regime. The most universal slogans call for the overthrow of the regime including the increasingly popular chant, “Death to the oppressor, be it the Shah or the Leader [Khamenei],” as the forward-looking protesters clearly reject the past single-party rule of the Shah and seek a democratic republic.

— As to the leadership of the protests, those leading the fight in the streets and confronting the repressive forces on the ground are setting the pace and leading the way. The uprising is not leaderless. Leadership is evident in the slogans and the tactics of the protesters, and in their fearless and ferocious steadfastness in the face of brute force. To expect a single face to be presented at this stage is simplistic. This revolution does not follow the old blueprint. It is more complex, due to the complexity of the situation and the enemy. But organization and leadership are inherent in its demands, its perseverance, and its continuity. The progression of over four decades of organized Resistance against the regime, with immense sacrifice and huge cost, inside the regime’s prisons and out, continues to inspire major segments of the protests.

— The “Uprising Phobia” promoted by the regime and its talking head abroad, insinuating a phantom ‘Syrianization’ or ‘Libyanization’ scenario for Iran, is a clearly incongruous comparison that ignores Iran’s history, its social development, and the nature of the uprising. The current uprising has cut through class, gender, ethnicity, and religious belief and is wholly united on the slogans of “Death to Khamenei” (overthrow), and “Death to the oppressor, be it is the Shah or the Leader” (charting a path forward to a democratic republic), as well as slogans such as “From Kurdistan to Tehran, my life for Iran,” and “From Zahedan to Tehran, my life for Iran” (stressing the unity of all Iranian nationalities). It is not a battle between classes, or ethnicities, or religious groups, and does not pit a social or political majority against a minority. It is a unified struggle to fundamentally change Iran through regime overthrow and establish a democratic, pluralist republic based on the separation of religion and state.

— All the regime’s efforts, using the maximum capacity of the Islamic Revolutionary Guard Corps (IRGC) to crack down have failed in the first 40 days, shattering the perception of the IRGC as being 10 feet tall. The fear of the regime has, indeed, been replaced with the regime fearing the determined population ready to sacrifice for change.

— As of this writing, according to the People’s Mojahedin Organization of Iran (aka MEK) on-location network, the estimated death toll among protesters killed by the regime’s suppressive forces is over 450. At least 32 teenagers are among those killed and an estimated 25,000 have been detained.

The manuscript ends with the opportunities for the international community to be a positive force for change in Iran:

— First, the United States and the European Union should support the Iranian people’s bid for democratic revolution against their tyrannical rulers. They must recognize the Iranian people’s right to self-defense, in accordance with the Universal Declaration of Human Rights that recognizes the right “to have recourse as a last resort, to rebellion against tyranny and oppression.”

— Second, in concert with democratic allies at the United Nations, lead punitive political, diplomatic, and commercial sanctions against the Iranian regime. Shut down regime’s embassies and expel its diplomats, agents, and those who, directly or indirectly, lobby for the Iranian regime. Tehran must be treated as what it is, a pariah state, and thus should be expelled from all international bodies; all economic ties must be severed.

— Third, refer the dossier of four decades of genocide and crimes against humanity, including the 1988 massacre of 30,000 political prisoners, as well as those in November 2019 and current killings during the uprisings, including the October 2022 murders at Evin Prison, the United Nations Security Council, and bring the Iranian regime leaders, including Khamenei and Raisi, to justice.

— Fourth, continue to work with private technology companies to ensure unfettered and cost-free access to the internet and communications technologies by the Iranian people”

We are at the moment of history, of freedom for Iran and the Iranian people
Comment
On Day 53 of Iran Uprising, oppressive forces open fire using AK-47 assault rifles on locals in the city of Marivan