Ms. Soona Samsami on the 20th Anniversary of Natanz Revelation 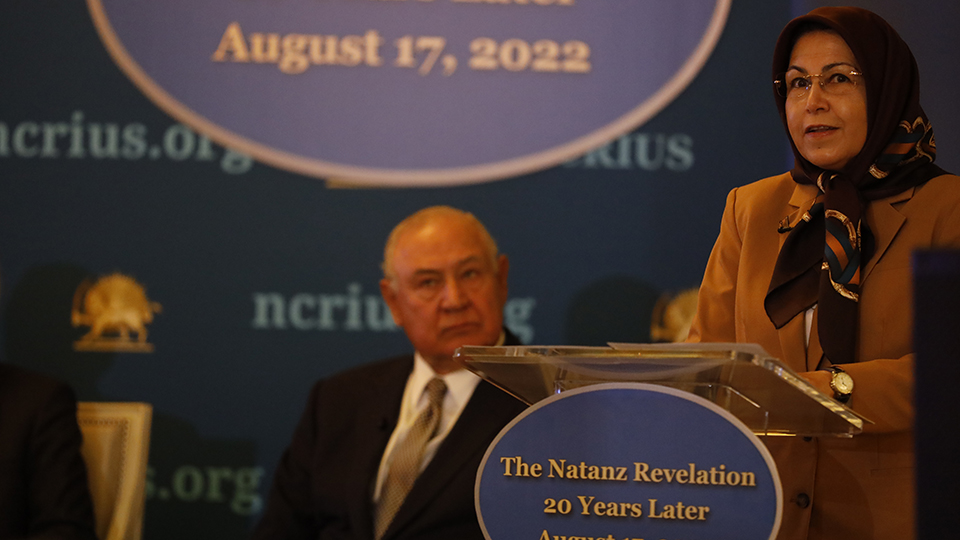 WASHINGTON, DC, August 21, 2022 — The National Council of Resistance of Iran – U.S. Representative Office (NCRI-US), held a conference on Iran on the 20th anniversary of its 2002 groundbreaking revelation of the then secret nuclear sites in Natanz and Arak in Iran.

A distinguished array of national security and non-proliferation experts addressed the significance of the NCRI’s Natanz revelation, the current state of the Iranian regime’s nuclear weapons program, the JCPOA, and options for an effective Iran policy.

Good morning everyone and thank you very much for joining us today for this important discussion. I also want to welcome our distinguished panel members today.

I am Soona Samsami, the Representative in the United States for the National Council of Resistance of Iran.

The event today, on the 20th anniversary of the NCRI’s revelation of the then-clandestine nuclear sites in Natanz and Arak, the integral part of the Iranian regime’s nuclear weapons program in this very place, is quite timely as the U.S. and Europe are desperately trying to convince the Iranian regime to return to the JCPOA.

One can imagine, where would the nuclear weapons program of the most active state sponsor of terrorism be, absent more than 100 revelations by the NCRI over the past three decades.

Unfortunately, western powers have chosen the path of appeasement instead of firmness, offering concession after concession to the mullahs in the futile hope of convincing them to come clean.

But the indisputable fact has been and continues to remain that the regime in Tehran will never abandon its quest for a nuclear weapon because it views it as a guarantee for its survival. The 20-year cat and mouse game by the regime is an affirmation of this fact.

The good news is that cracks have been appearing in the mullahs’ iron-fist rule because of the popular uprisings and activities of the MEK’s Resistance Units nationwide.

Despite the execution of over a 100,000 of its members and sympathizers, including the massacre of 30,000 in 1988, in which the current regime president Ebrahim Raisi played a major role, and a massive and expensive demonization campaign, the mullahs have failed in their objective to eliminate the MEK. Rather, the level of support for the organization has risen dramatically, especially among women and the young generation. The Iranian people want change.

In order to permanently curtail mullahs’ efforts in this regard, the west must take a firm position, the least of which is to activate the six UN Security Council resolutions. The ultimate solution to the nuclear crisis and the clerical regime’s export of terrorism and killings at home, is regime change by the Iranian people to be replaced by a democratically elected republic, a task the NCRI and the MEK are working towards based on the 10-point plan of Mrs. Maryam Rajavi for future Iran.

With that, I leave you with the panel and the veteran journalist James Rosen, senior White House correspondent for Newsmax TV who will introduce and moderate the panel.

Thank you very much.