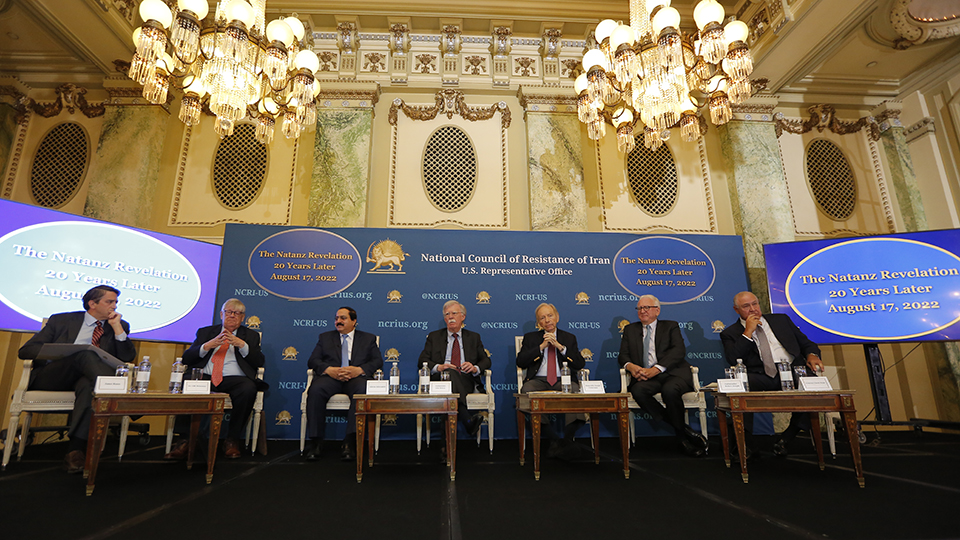 WASHINGTON DC, August 21, 2022 — On August 17, 2022, the National Council of Resistance of Iran – U.S. Representative Office (NCRI-US), held a conference on Iran on the 20th anniversary of its 2002 groundbreaking revelation of the then secret nuclear sites in Natanz and Arak in Iran.

A distinguished array of national security and non-proliferation experts addressed the significance of the NCRI’s Natanz revelation, the current state of the Iranian regime’s nuclear weapons program, the JCPOA, and options for an effective Iran policy.

James Rosen gave a brief history of the revelations 20 years ago:

“It was on August 14, 2002, in this very hotel, that Alireza Jafarzadeh, in his capacity at the time as a spokesman and Congressional liaison for the Washington office of NCRI, held a news conference right here and disclosed to the world the existence of two previously unknown secret nuclear sites inside Iran. One was located at Natanz, and as Alireza told the world at that time, it was devoted to the project of covert nuclear fuel production. The other facility was at a town called Arak, where a heavy water reactor was under construction.

“The IAEA had paid no visits to these sites. And instantly, this stunning news conference which was covered widely by the Washington press corps at the time, galvanized the entire non proliferation community, throughout both here in the United States and around the world into action. Instantly, the IAEA demanded access to these two unknown nuclear sites in Iran. The regime dragged out that process, and the next big press conference held, again here in Washington by NCRI, was in February, 2003 when again Alireza and his colleagues disclosed efforts by the Iranian regime to limit the access of nuclear inspectors from the IAEA. Finally, in June, 2003, the IAEA gained access to those sites and discovered traces of uranium in the particles, despite a massive effort by the regime to decontaminate the sites.

“I think we’re going to begin our discussion with Alireza, that seems fitting. Alireza, tell us about the impact of those revelations, twenty years ago.”

Mr. Jafarzadeh:
“First of all, thank you very much, James. I want to thank the panel on my own behalf as well for attending this event on this very historic day. Obviously, the Natanz revelation was groundbreaking, was important because it really awakened the world about the nuclear weapons program of the Iranian regime. But also it opened doors to the International Atomic Energy Agency to be able to have inspections on a regular basis. This is something that has continued until today. This revelation was significant because it actually threw off-balance the Iranian regime, which had plans for years to develop nuclear weapons. And as Hassan Rouhani, the former president of the Iranian regime said in his book, their plan was to present the world with what they called a fait accompli, to have this Natanz facility having 54,000 centrifuges installed by March 2003. And of course, this revelation disrupted that. What’s also important is the follow-on press conferences that we had. In a matter of nine months after the Natanz revelation, we had three other major press conferences right here in Washington. First, in February 20th, 2003, we exposed the centrifuge testing facility known as Kalaye Electric Workshop in East Tehran, where they were testing centrifuges, clearly something they had hidden. Then in May of 2003, two other press conferences. One, the Laser Enrichment Facility near Karaj and also the Lavizan-Shian site, which is where the weaponization work was taking place.”

Mr. Rosen:
“… Alireza, obviously the movement that produced that news conference is very much still in existence. Twenty years on, we can’t imagine that it’s the exact same cast of characters; through sheer attrition and other means we would expect that some of the people that were instrumental, let’s say, even in this revelation 20 years ago are not still with the movement. But how would you characterize the state of this movement today? Has it grown in sheer population? Has it evolved with technology, etc.? Tell us how the organization exists today and how this helped your organization, if you will?”

Mr. Jafarzadeh:
“Well, obviously things are very different now than 20 years ago. Twenty years ago, the circumstances were not as favorable for us as it is today. We were fighting at that time the unjust designation that ironically, interestingly I was just telling you about the press conference we had here in Washington, in nine months we had like four press conferences, and then on the anniversary of the revelation of Natanz, in August, 2003, our office was shut down by the State Department, by adding us to the designation. Why? Because instead of focusing on the threat that we had helped the world picture it. By mid-2003, you already had a full picture that the Iranian regime has a nuclear weapons program. We talked about the enrichment plan, the weaponization, there was enough evidence out there to confront it. Yet, instead of that they started negotiating with Tehran and the EU with the backing of the United States actually, the concessions and then we got the punishment instead of them.

“Now, our situation has changed. We’ve managed to unchain ourselves from the designation ten years ago. Then the political circumstances in Iran has changed. You’ve had eight major uprisings since 2018. The general public is vehemently opposed to this regime. This regime is in big trouble domestically. That has created the opportunity for the expansion of the movement. And remember, the gray area of the so-called moderates in Iran, that’s over with Raisi, so people are not looking for anything within the regime, they’re just looking for the solution. And when you have the network, when you have these Resistance Units inside the country, you have far more chances of getting attention and appeal and recruitment. That’s why the resistance expanded.

“I give you one example. During the annual events every year in summer, this year actually five thousand members of the MEK Resistance Units inside Iran taped video clips, with their faces covered, from all over the country, talking about the movement and regime change. This is up from last year, which was only a thousand. That shows you the rate of growth. Of course, a lot of the members have ben arrested and executed. In 69 prisons in Iran, we have members of these Resistance Units who have been arrested. But the good news is that the rate of the expansion is far greater than the rate of the arrests.”

Mr. Rosen:
“Alireza, presuming that it is true that the current U.S. administration does not provide any kind of support to MEK or to NCRI, what would sensible support of your organization from an American administration look like? What should they be doing that they’re not?”

Mr. Jafarzadeh:
“Well, certainly the sensible support is not about arms or money or boots on the ground. It’s actually the political support. But it starts with standing firm against the regime, because if they are trying to reach out to the regime they will never look at the Resistance. That’s the story of the past 40 years. They were always investing on the regime. I think with the rise of Raisi at the helm, the message should be received in Washington and every capital in the world that this regime is in big trouble, otherwise Raisi would not have been put in that place. The mullahs are after the nuclear bomb as the only way for survival. And any negotiations that is being done is actually feeding the Iranian regime. The best way to help the resistance is to stand on their side politically, condemn every act the regime does against the people, against the protestors, and recognize their right to overthrow the regime.”

John Gizzi from NewsMax:
“My question is two part about regime change. Did the recent assault on Salman Rushdie accelerate the movement for regime change or was it completely non-germane to Iran. And second, we talk a lot about it, but look at Libya. Qaddafi was overthrown and there have been two governments vying for control … out there, it’s the Wild West and there’s no firm government. What’s to guarantee that Iran wouldn’t repeat the Libya situation.”

Mr. Jafarzadeh:
“Yes. First of all, in terms of the issue of the regime change, certainly nobody is talking about any other scenarios except indigenous regime change by the people of Iran. And it’s something that is happening. It’s not that we have to create it. It’s going on right now, and especially since 2018 the vast majority of the people of Iran have been protesting in the streets. Some of the uprisings like in 2019, involved over 200 cities. The regime had to kill 1,500 people in two days by shooting directly at them in the streets. The people have already rejected this regime. So there’s a huge asset out there that no one needs to invest in anything else.

“Second, in response to what’s going to happen afterwards, unlike any other countries like in Syria, Libya and other places, that there were foreign players that were trying to impact the situation, and most of them actually were connected to Tehran, they were the ones that were trying to take advantage of the post fall of those dictatorships. In the case of Iran it’s exactly the opposite. The main agitator, which is the regime itself, is now going to be overthrown.

“Then, there’s an organized opposition, there’s a structure on the ground, there is an alternative to this regime. This network of the resistance that exposed all of the major nuclear sites of Iran, and their terror operations, they are the ones that are organizing or leading or igniting those protests inside the country. It has a very expansive network with organizational capabilities, not just inside Iran but also outside of Iran. There is a parliament in exile. There is a structure on the ground. So, when the regime falls, you don’t need to worry because what’s going to be knocked down are the Revolutionary Guards, or the (Basij) who are the troublemakers, who are the killers and murderers. When you give the opportunity to the people with a history of opposition, then the outcome is not going to be Libya, it’s not going to be Syria …”

Mr. Jafarzadeh:
“It won’t be Iraq, because guess what, who was behind all the post-Iraq developments, it was the Iranian regime. All of the people who are big troublemakers, they were already trained in Iran. The Badr Corps that took over after the fall of Baghdad in 2003, especially the southern part of Iraq, were all part of the Iranian Revolutionary Guards, they were the 9th Corp of the Revolutionary Guards that just jumped in. In the case of Iran, we are targeting the epicenter of all the problems in the region by having the organized opposition on the ground, a well-defined platform to show where they’re heading, the 10-point plan of Mrs. Rajavi explains all of the ideals and goals for the future of Iran, and there is a clear leadership and organizational structure on the ground, that has been proven and tested.”

Ms. Soona Samsami on the 20th Anniversary of Natanz Revelation
Comment
PRESS CONFERENCE: Federal Complaint against Ebrahim Raisi for Role in the 1988 Massacre