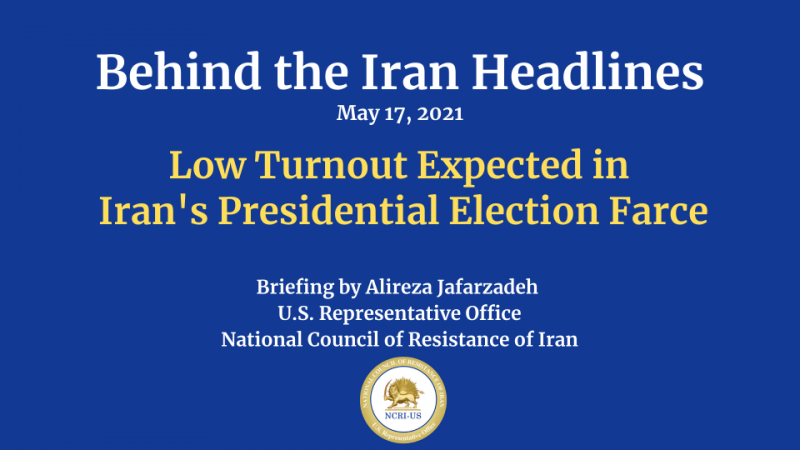 Alireza Jafarzadeh, NCRI-US Deputy Director: The Guardian Council vetting of Presidential candidates is not final, but officials including Khamenei are already expressing concern about a massive boycott.

Following a call by the Iranian Resistance’s President-elect, Mrs. Maryam Rajavi, the Resistance network in Iran has been leading a nationwide campaign to boycott Iran’s sham elections.

According to Shargh daily, various polls show that “more than half” of eligible voters are expected to stay away.

Reasons for the expected low voter turnout, according to the regime’s own media, include economic corruption, coronavirus mismanagement, low wages, incompetence, and the January 2018 and November 2019 uprisings.

One media cited “fake politicians posing as reformists and fundamentalists.” Another wrote, “Getting people to go to the polls requires something like a miracle.”

This perhaps explains last-minute registrations by several familiar faces from each faction — from Ebrahim Raisi, known as “the mass murderer,” to Ali Larijani, self-proclaimed independent but a longtime confidant of Khamenei involved in the “chain murders” inside Iran and terrorism abroad, to a long list of IRGC commanders.

Each of these individuals promises to correct the wrongs of past administrations, and talks like he just landed from Mars, whereas the people know their 4-decade track records all too well.

Which is why voters are instead looking to revive the uprisings where people chanted “reformers, hardliners, the game is now over.”

Nothing can get the people back to the ballot box. They have already voted, “Down with the dictatorship!”

Ignore Tehran’s lies and watch for the election boycott.