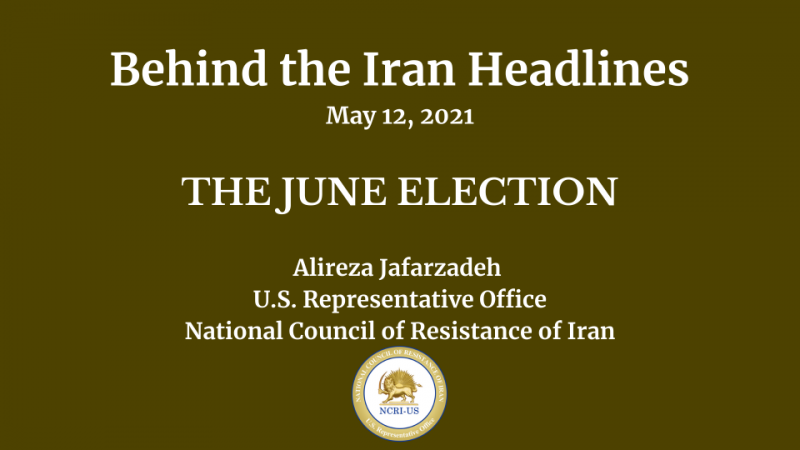 Alireza Jafarzadeh, NCRI-US Deputy Director: The regime’s 13th presidential election will be held on June 18, 2021. Registration of candidates began on May 11 and will continue until May 15, 2021.

The un-elected Guardian Council, half of whose 12 members are selected by Supreme Leader Ali Khamenei and half approved by him, will vet every candidate and select a few by May 27th. During the 2017 election sham, only 6 were approved from among 1,636 who had registered.

The presidency has little impact on Iran’s domestic or foreign policy, both of which are set by the Supreme Leader.

The electoral process is stage-managed and tightly controlled to produce the desired results. Ballot numbers are regularly inflated several-fold to imply widespread participation.

This year’s election has been profoundly influenced by the nationwide uprisings since 2017, whose main slogan has been: “Hardliners, Reformers, the game is now over,” accompanied by chants of “death to the dictator” in the several rounds of uprisings since.

The Iranian Resistance has called for a boycott of the elections. Regime officials regularly sound alarms about voter apathy; many warn of an unprecedently low turnout.

An internal report by the Ministry of Interior admits the February 2020 parliamentary election turnout was 20% nationwide and only 9% in Tehran.

According to a recent poll by a regime-affiliated agency, about 78% of people over the age of 19 will not vote in the June election.

Khamenei seeks the victory of his preferred candidate, but he is also fearful of his regime’s fragility in the face of a brewing internal insurrection and international isolation.

As such, the regime is facing an impasse in the upcoming election and something must give. A wrong turn would lead to protests even more ferocious than before.