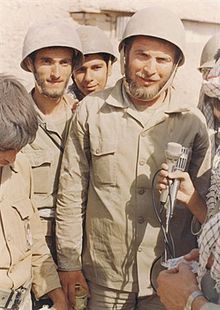 IRGC commander Qalibaf, topping the list in Tehran must face justice for war crimes and crimes against humanity

NCRI-FAC, February 21 – Those making it to the Parliament after the sham election are a band of IRGC commanders and criminals who must fact justice.

The top vote getter in Tehran, IRGC Brig. Gen. Mohammad Baqer Qalibaf, who is poised to become the Parliament Speaker, has always been among the most senior officials involved in suppression, terrorism, warmongering, theft and plunder. He received only 14 percent of the vote cast by eligible voters despite astronomical rigging.

From the onset of the mullahs’ rule, Qalibaf played an active role in the suppression of the Mujahedin-e Khalq (MEK), and protests in Tehran and Kurdistan, and popular uprisings, theft and plunder.

He was the commander of the so-called 25th Karbala Division during the Iran-Iraq War and dispatched thousands of children and students to mine fields. For this reason, he was quickly promoted to the IRGC’s Ground Forces’ Joint Chiefs of Staff. In 1994, he was appointed as the commander of the Khatam al-Anbiya Garrison, the country’s largest economic conglomerate, and became IRGC’s Air Force commander three years later. He played a very important role in the formation of IRGC’s missile units and their expansion from three to five brigades.

More than 80% of those who made it to the parliament or who will go 2next round of the election are #IRGCterrorists &criminals involved in suppression,terrorism,&warmongering. #IRGC Brig.Gen.Qalibaf from Tehran is vying to head the Parliament.#MyVoteRegimeChange #IranRegimeChange pic.twitter.com/pSHxBVEkAa — NCRI-FAC (@iran_policy) February 23, 2020

In July 1999, despite being IRGC’s Air Force commander, he personally took part in the suppression of the students’ protests. In 2003, as a Presidential candidate, he said, “When the 1999 incident occurred at universities’ dormitories, I and Mr. Soleimani wrote that letter (to the President). When students began to march on Khamenei’s office, I was the IRGC’s Air Force commander. My picture on a motorcycle is available. I was with Hossein Khaleqi with whom we were on the street to quell the protests. Wherever necessary, we come to the street and beat (people) with sticks. We are among those who wield their sticks. It is an honor that in 1980, we were wielding sticks against Massoud Rajavi (the Iranian Resistance’s Leader). We confronted them in streets and universities. Well, we were martyr (Mohammad Hossein) Beheshti’s men. Since then, we wielded our sticks as necessary. I did not say I am the Air Force Commander and that I should not be in the street; that as a commander I should not be in the street.”

In 2,000, Qalibaf was appointed at the commander of the State Security Force (SSF) and set up police unit 110. In September 2002, he implemented the plan for moral security and during the 2003 student protests, he told the Supreme National Security Council, “As the SSF commander, I will personally crush and quell them.”

In 2005, Qalibaf became Tehran’s mayor for the next 12 years, stealing and plundering the city’s resources, including offering properties of Tehran’s municipality to the regime’s apparatchiks at great discounts. At the time, the suppressive gender segregation plan was implemented in municipalities.

Qalibaf must face justice for 41 years of theft, crimes against humanity and war crimes.