Iran’s State Media: Major Uprisings Are on the Way 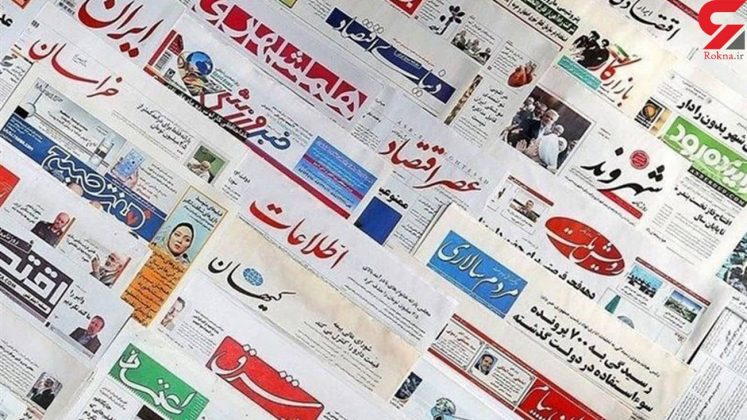 The situation of the Iranian society is so critical that Iran’s state-run media, despite the regime’s official censorship policy, are compelled to acknowledge, and warn about, the situation on a daily basis.

In their articles and editorials, many of them portray the society’s restiveness, the regime’s international isolation, economic suffocation, and the failure of the mullahs’ ‘lie therapy.’

In its editorial on Sunday, the state-run Hamdeli daily wrote: “The government and other institutions of power do not make the slightest effort to address people’s demands. In fact, they are deliberately blocking the way of answering these demands.” The article continues: “The protests in 2018 and 2019 demonstrated the depth of people’s mistrust and how they are distancing themselves from main political streams, particularly the [so-called] reformists. Since then, there has been no plan which shows the least of the public’s trust in institutions of power and political factions. Every slogan and demand by these institutions meets with the absolute indifference and distrust by the majority of the people. The public’s mistrust of state television should be seen from the same perspective. This level of mistrust is a dangerous indicator.”

The state-run Jahan-e Sanat daily on Sunday warned the regime’s officials of further protests, while referring to Iran’s economic crisis due to the regime’s wrong policies. “Iran’s economic problems and challenges have become so extended that officials are unable to control them. The combination of all these issues have impregnated the Iranian economy with a lot of crises that could have consequences such as increasing public dissatisfaction,” read the article. Referring to the rising liquidity and inflation rate in Iran, the article continues: “The central bank has tools that it can use to control liquidity and inflation, but the experience of recent years shows that people and society no longer trust the policies and economic plans of decision-making institutions. Because these decisions are biased and political.”

The state-run Mostaghel daily in an article on Saturday warned the regime’s officials of their ongoing oppression. While referring to the recent tragic suicide of the father of Amir Hossein Moradi, a detained protester now on death row, it wrote: “Some days ago, the father of a political prisoner who is facing execution committed suicide and died. This news sent a wave of shock and grief to the society and among all walks of life. Learning from other countries’ experience could be helpful. [In those countries] they recognize their opponents’ right to life and then freedom of expression. Perhaps, the [regime’s] rulers may think that rejecting any voice of dissent is not a threat to them in power.”

In this regard, the state-run Hamdeli daily on Saturday wrote: “If the health officials were listened to, perhaps not just the innocent students, but many parents were still alive. Unfortunately, this country has dozens of decision makers. When people raise their voice (like they did after the gasoline price hike) [which resulted in major Iran protests in November 2019] none of these officials took responsibility.”

Recently, the regime’s president, Hassan Rouhani, bogusly claimed that Iran’s economy is better than Germany. In this regard, the state-run Aftab-e Yazd daily on Saturday wrote: “The president, unaware that Iran and Germany have a galactic distance in economic matters, suddenly claims that our economic situation is better than Germany’s. This comparison is wrong and could not be done in any way. Our economy’s problem is [having] economists that do not understand Iran’s economy at all. We are living in a time, that unlike the past when a few people were educated, even children laugh at [Rouhani’s] remarks.

The Hamdeli daily, while comparing the regime’s economic situation to the mullahs’ situation during the Iran-Iraq war, on Saturday wrote: “I, the writer, consider the current situation like the one in the spring of 1988 in our southern and western borders, with our fast retreats from Fav, Shalamche, Majnoon and Halabche fronts. Unfortunately, these days, the front is about to collapse inside the country. ‘The exchange market front’ has collapsed. The ‘enemy,’ inflation, is advancing on the housing and the necessities of the people ‘fronts.’” The article continues: “Is the current economic situation the result of sanctions only, or is it the result of incorrect economic and political policies of a group of policymakers, legislators, and planners?”

The Setare-Sobh daily further highlighted in an article on Saturday that Iran’s economic problems are due to the regime’s mismanagement. “Some people have always benefited from the country’s economic crisis and do not want to solve problems. The country’s current poor economic situation is not the result of the actions of one government and one person, but 40 years of wrong policies and ill-considered decisions have put the country in an economic crisis.”