Iran’s Cyber Army – the Latest in a Series of Maleficence 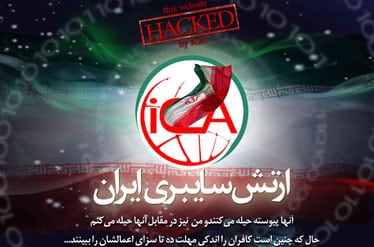 In July, when the P5+1 struck a nuclear deal with Iran dubbed as “historic,” administration officials spun it as a first step on a path toward improving Tehran’s behavior. That path hit yet another bump in recent weeks, when Iran launched nuclear-capable missiles in defiance of a United Nations Security Council resolution that endorsed the nuclear deal.

In a letter to the U.N., the U.S., France, Great Britain and Germany decried the missile tests. Secretary of State John Kerry, speaking on a visit to Bahrain on April 7, 2016, condemned “the destabilizing actions of Iran.”

Iran’s Minister of Defense Brig. Gen. Hossein Dehghan shot back: “If John Kerry actually thought about these subjects, he would no longer utter nonsense and foolish words.” The U.S., he said, should “leave the region and stop supporting terrorists.”

The Iranian regime, in contrast, clearly has no plans to curtail its regional meddling. According to reports from inside the Iranian regime, Supreme Leader Ali Khamenei has dispatched hordes of Islamic Revolutionary Guard Corps (IRGC), mercenary militias, as well as groups of regular army forces to Syria in anticipation of new attacks against the opposition and Free Syrian Army (FSA).

In a move unparalleled since the Iran-Iraq war, Khamenei has deployed his military on a large scale abroad.

The missile launches, coupled with the Iranian regime’s expanding role in wreaking havoc in Syria, naturally grabbed the headlines, overshadowing a no less disturbing report by the U.S. Justice Department that Iran was behind a series of cyber attacks against the U.S., targeting at least 46 companies and a dam by 2013. Now, new and stunning intelligence about the scope and depth of the Iranian regime’s investment in a cyber war against the U.S. are widening the anti-terror focus.

According to the U.S. indictment, between 2011 and 2013, hackers linked to the IRGC attacked U.S. financial institutions as well as a flood-control dam 25 miles north of New York City. Other targets included the New York Stock Exchange, Bank of America, and AT&T.

The hackers broke into the command and control system of the dam in 2013, according to Washington, and may have been able to release water from behind the dam if not for the fact that the sluice gate had been manually disconnected at the time of intrusion.

This is an unequivocal warning that the Iranian regime is preparing to mount a larger cyber attack against American infrastructure.

According to new reports from inside the Iranian regime, IRGC commander Mohammad-Ali Jafari has thrown his weight behind designating a “Cyber Force” to act as the IRGC’s “sixth force” – alongside its ground forces, navy, aerospace, extraterritorial Qods (Jerusalem) Force, and domestic Bassij militia.

The IRGC has been deeply involved in cyber warfare aimed at domestic suppression and supporting terrorists abroad since 2007. IRGC Brigadier General Hossein Hamedani (killed in late 2015 leading the charge in Syria) announced in 2010, “The Bassij cyber council has trained over 1,500 active ‘cyber jihadis,’” promising that their activities would increase in the near future.

When the IRGC’s Intelligence Organization was formed following the 2009 nationwide uprisings against the theocracy, the Cyber Army was placed under it. In November 2010, the Cyber Army claimed that it had hacked 500 sites simultaneously, while disrupting the intelligence networks and private websites of other counties.

Tehran has no intention of getting “right with the world,” as President Obama once suggested. The Iranian regime is committed to pursuing a strategic war against the U.S. and its allies. Any hopes of change in behavior are illusory at best.

Washington needs to develop a more comprehensive strategy to confront this threat before it’s too late. Since the regime’s cyber force, now targeting U.S. sites was formed to counter social protests and political activism inside Iran, America’s natural allies in this war are the Iranian people and the organized opposition.

Buying Heavy Water From Iran, an Unjustified Concession by the U.S.
Comment
Sorry Mr. President, But Your Nuclear Deal Has Not Changed Iran