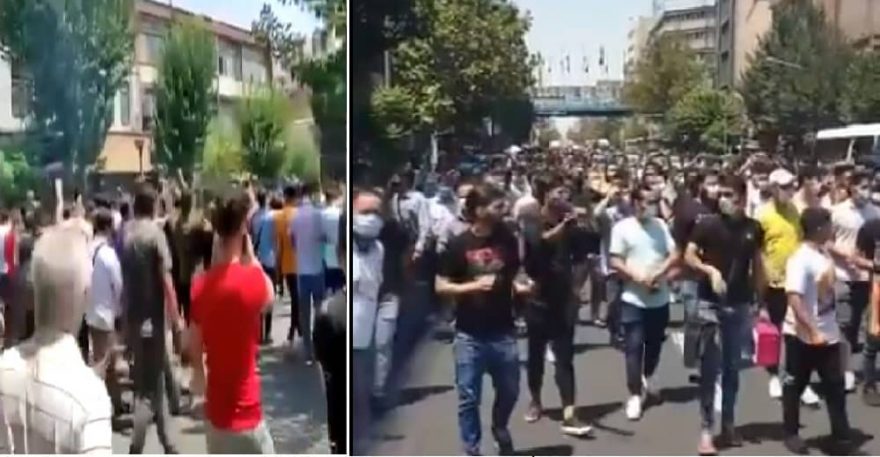 Monday, protests erupted in Tehran with people chanting slogans such as “down with the dictator.”

But how these protests started, and what do they indicate?

The power outage in the Aladdin Mobile Market was the starting point for these protests. Slogans rapidly became political, denouncing the entire regime and targeting the mullahs’ supreme leader Ali Khamenei.

These protests shocked the regime’s security forces. The protesters walked from the Istanbul Crossroad to Baharestan street, where the regime’s parliament is located.

Footages from Iran showed young protesters walking side by side without fearing the oppressive forces and were chanting slogans against the regime and calling for unity. They urged other citizens to join their protest.

They also chanted, “If the mullahs’ are not buried, Iran won’t prosper,” showing the only solution to Iran’s crises is the regime’s downfall. The regime had not recovered from the protests in Tehran that people in Kermanshah, northwest Iran, rose and clashed with Khamenei’s forces. At night, the protesters in Karaj, near Tehran, poured on the streets expressing their solidarity with other risen cities, particularly Khuzestan, where the protests originally began.

They chanted: “From Karaj to Khuzestan, unity, unity,” “Don’t be afraid, we are all together,” and “We would die but won’t accept humiliation.”

In other words, 12 days after the protests began in Khuzestan, other cities joined calls for regime change. Reports and footage from Iran in the last two days showed more protests in other Iranian cities.

These protests would continue to spread across Iran because the society is restive and ready to explode. After 42 years of the mullah’s oppression, corruption, and plundering of the national wealth, the Iranian society has reached the boiling point. The regime’s oppressive measures would no longer affect Iran’s explosive society.

The recent protests in Tehran and Karaj showed that even if a small group of people starts protests, others rapidly join them, calling for regime change.

As Mrs. Maryam Rajavi, the President-elect of the National Council of Resistance of Iran, said: “The young protesters in Tehran display the Iranian people’s firm resolve to establish democracy and national sovereignty. The sacrifices of martyrs in Khuzestan now echoes in the cries of ‘Death to the dictator’ in Tehran’s central streets, near Khamenei’s headquarters. The uprising carries on for the 12th day showing that the henchman of the #1988Massacre cannot save Khamenei from his certain demise.”