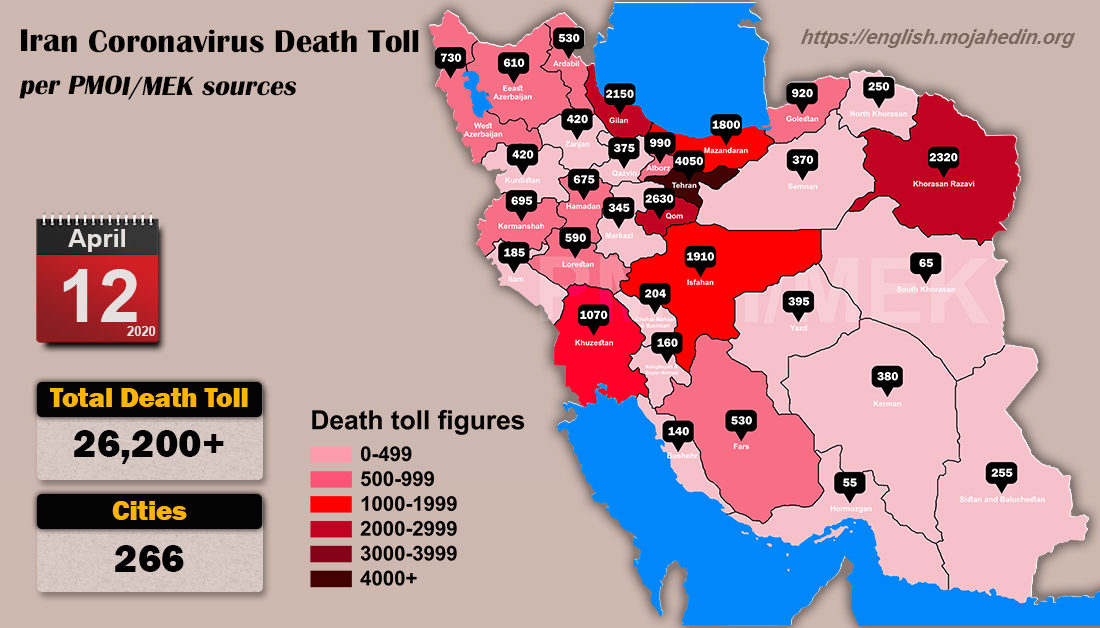 The death toll in Tehran and Shiraz is rising rapidly

Today, Mojtaba Yazdani, Tehran’s deputy mayor told the state news agency, IRNA, about the creation of a new section in Tehran’s Behesht-e Zahra Cemetery for Coronavirus fatalities with “10,000 graves in new dimensions.” He also announced that the 40-foot cold chambers and two hive-type cold chambers, and two 12-meter refrigerated containers, as well as crisis shelters, are equipped and prepared. Earlier, the NCRI had announced that a contract had recently been signed to “build 10,000 new graves in Behesht-e Zahra.”

However, today, Hassan Rouhani once again tried to justify the criminal decision to force people back to work and ridiculously claimed that the regime’s situation in combating the Coronavirus is better than European countries. He also tacitly pointed to the shortage of food, saying, “Some countries that used to sell and export wheat until lately, are becoming stingy and refuse to sell.”

Rouhani’s remarks do not sell even among regime’s Health officials. Yesterday, Alireza Zali, head of Tehran’s National Coronavirus Combat Taskforce (NCCT) speaking to the state TV 5 about forcing people back to work, said, “The consequences in the number of the patients will not show itself until two weeks from now.” “Our medical staff are exhausted. They faced a lot of problems; some were martyred, some are out of use…Our exhausted team must now be on the verge of a new peak in the outbreak, while we have not yet felt that proper and desirable slope in Tehran, yet,” he added.

Today, in an article published at the state daily, Aftab-Yazd, Mohammad-Reza Mahboubfar, an epidemiologist for infectious and contagious diseases, wrote, “In the coming days, the number of deaths will reach to unbelievable figures… According to the information received, the number of people infected with the virus throughout the country has not decreased. It is important to note that only 6%, or at best 10% of patients, have been identified, and others have self-quarantined themselves at home, preferring not to go to the medical centers. The peak of the disease has yet to come.”

In recent days, more officials within the regime have demanded the payment of quarantine costs by Khamenei-controlled cartels. Masih Mohajeri, editor-in-chief of the state-run daily Jomhuri Eslami state, and a former adviser during Rafsanjani and Khatami presidency wrote today: “Given the recession caused by the Coronavirus outbreak … large financial holdings that have the resources and also belong to the public must come to the fore to solve the problems definitively. These include the Headquarters to Execute Imam Khomeini’s Order, Mostazafan (Abased), and Astan-e Quds Razavi Foundations. The extensive resources and the assets available to these conglomerates, if brought to the aid of those affected by the Coronavirus disaster, will completely solve the problems of these sectors in the shortest possible time.” “If they do not spend the money that they have available to them for the abased people, how do they want to justify the reason for their existence in the first place?” he added.

Meanwhile, Iraj Harirchi, Deputy Minister of Health, told Aftab-Yazd state daily this morning, “The Coronavirus death rate is higher among the poor. They have less access to health care and medical services. Coronavirus’s impact on the economy will affect the poor much more. Those who are at risk of losing their jobs and those who work part-time will suffer more.”

A doctor in a hospital in Shahr-e Ray told Arman state-daily, today, “Many people who are suspected of being infected by Coronavirus are from the impoverished sections of the city and live in slums on the fringes of cities. When we tell them that they must be tested, the majority of them refuse and say if we stay in the hospital for several weeks, who is going to feed our family? And we will lose our jobs. Please treat us with medicine.”

Meanwhile, the regime remains concerned with social uprisings and rebellions. Today, the former deputy interior minister for political affairs and security told Arman state daily, “Social and security problems are possible not only in the post-Coronavirus situation but also in the present circumstances. If the government does not manage (the crisis) smartly and prudently, we may face acute social problems.”

Mustafa Moin, the regime’s former health and higher education minister, told the Setar-e Sobh website today, “There is a possibility for the recurrence of social or political tensions, similar to the last two or three years, regardless of political factions. Both in the short and long term, Iranian society and our country will be affected by the psychological, social, economic, and political consequences of Coronavirus Pandemic.”