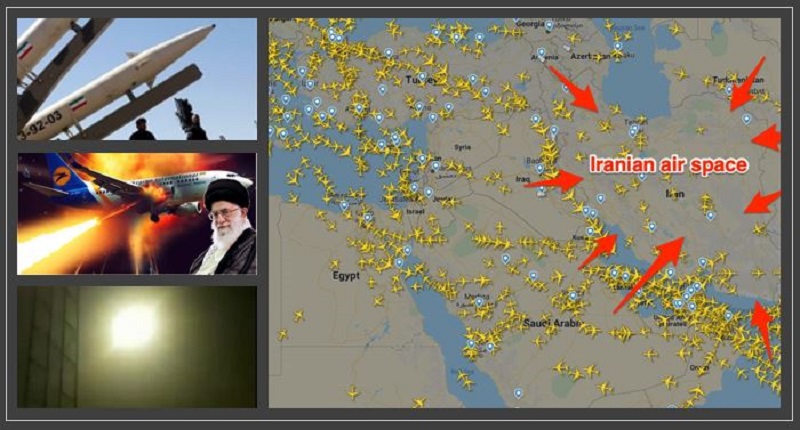 Recent developments in Iran demonstrate that Iran is not safe as a travel destination. The recent downing of a commercial airliner, the regime’s deadly crackdown on the nationwide Iran protests and its continuous policy of taking dual national or western citizens as hostages to pursue its blackmailing campaign once again affirms this argument.

After the elimination of Qassem Soleimani, the commander of the Revolutionary Guards (IRGC) Quds Force, the Iranian regime launched 17 missiles against a United States base in Iraq. The regime’s so-called “hard revenge” was taken from innocent passengers of a Ukrainian airliner by the regime’s Revolutionary Guards (IRGC) on January 8, killing 176 innocent people aboard.

These missile attacks prompted many airlines and travel agencies to cancel their flights through Iranian and Iraqi airspace.

Soon after the missile attacks, the US Federal Aviation Administration said it was banning US-registered carriers from flying over Iraq, Iran and the Gulf.

In addition, an Air France spokesman told AFP: “As a precautionary measure and following news of airstrikes underway, Air France has decided to suspend until further notice all flights through Iranian and Iraqi airspace.”

In addition, the Asian Football Confederation (AFC) has shifted two preliminary matches in its elite club competition from Iran to neutral venues because of security concerns.

These developments have a heavy economic consequence for the regime, which is desperate for financial income to continue its support of terrorist groups such as Hezbollah and Hamas and boost their morale, especially after the elimination of Qassem Soleimani.

In November 2019, following the regime’s decision to triple gasoline price, protests across the country erupted and quickly turned political. During the nationwide Iran protests, the regime, fearing of its immediate collapse, brutally suppressed protesters. According to reports published by the People’s Mojahedin Organization of Iran (PMOI, Mujahedin-e Khalq or MEK) over 1500 people were killed by the state security forces, 12,000 arrested and 4,000 injured. The MEK has so far identified 724 martyrs of the Iranian people’s uprising.

The second wave of the Iran protests started after the regime’s forced admission to downing the Ukrainian airliner. The regime used tear gas and live ammunition against peaceful protesters. As Amnesty International reported, the regime forces also used sexual violence against the detained protesters, especially women.

The regime’s deadly crackdown on peaceful protesters once again proves this regime will commit any crime to maintain its power, as it has done in the last 40 years.

Iran: worst place in the world for foreign or dual nationals

Staring in 1979 by taking the U.S. embassy workers as hostages, the Iranian regime started a blackmailing campaign. The regime has continued this policy in the last 40 years by taking dual nationals hostage and releasing them after receiving its demanded bargain. The case of Nazanin Zaghari-Ratcliffe is a clear sign of the regime’s policy of taking dual nationals as hostages.

On the other hand, recent events in Iran prove that the regime’s brutality is not limited to the Iranian citizens or dual nationals.

On January 14, Ahmad Alamolhoda, Mashhad’s Friday Prayers Imam and the representative of the regime’s Supreme Leader, Ali Khamenei, in Khorasan Razavi Province, while referring to the arrest of the British Ambassador in Iran in early January, said he should have been “chopped into pieces.”

Despite the regime’s campaign and its game of portraying criminals such as its president Hassan Rouhani and Foreign Minister Mohammad Javad Zarif as “moderates” and stating that Iran is a safe holiday destination, it is clear that Iran is not safe for Iranian citizens or for foreign nationals, as long as this clerical regime is in power.