MENUMENU
Articles > Iran is Directly Fueling the Syrian Civil War. It Won’t End Until Washington Gets Them Out.

Iran is Directly Fueling the Syrian Civil War. It Won’t End Until Washington Gets Them Out. 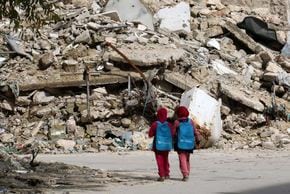 In recent weeks, bombs dropped by the governments of Bashar Assad and his allies have killed and mutilated innocents – men, women, and children – in Syria’s Aleppo. The horrific shelling is Assad’s attempt to force a wholesale surrender from the opposition movement in Syria; Assad seeks to crush his detractors and prolong the life of his brutal regime.

Over the past five years, peace initiatives have failed while war crimes, use of chemical weapons and millions of refugees have grabbed international headlines.

The appalling attacks on Aleppo and the unprecedented number of casualties would not have been a reality were it not for the direct involvement of the Iranian regime in the Syrian conflict.

Assad should have fallen long ago. But more than 70,000 Iranian and non-Iranian mercenaries have been deployed by the Iranian regime’s Islamic Revolutionary Guard Corps (IRGC) to fight in Syria. That figure far exceeds the number of the 50,000-strong Syrian military force, according to IRGC reports.

Supreme Leader Ali Khamenei has pulled in the top brass of his regime’s military command. Mohammad Ali Jafari, the IRGC’s Commander-in-Chief, personally traveled to Syria for the offensives against the cities of Nubl and Al-Zahra in February 2016. IRGC General Mohsen Reza’i, former Commander-in-Chief during the 1980s Iran-Iraq War, was appointed as Khamenei’s Deputy for the Syrian War in 2016. IRGC General Qassem Soleimani, Commander of the Qods Force, regularly travels to Syria and meets with Assad.

Iran’s state-run media have published the names and pictures of at least 33 IRGC generals and dozens of other senior commanders killed during the fighting. Corpses are routinely flown back for burial in Iranian cities. The total number of causalities from the IRGC and the Syrian (non-military), Afghan and Iraqi militias exceeds 10,000. Roughly 1,500 of them belonged to the IRGC.

Over the past 5 years, Tehran has budgeted about 100 billion dollars for the war, most of which has been spent on procurement of weaponry or covering the Syrian military’s expenses. Tehran spends one billion dollars annually in Syria solely on the salaries of its mercenaries, and was also instrumental in prodding Russia to play a greater role in the situation.

But why is Tehran so heavily invested in the conflict? To fight ISIS? Absolutely not.

In fact, the Iranian regime has no presence in the eastern part of Syria where ISIS is dominant. And, after all, it was Tehran’s closest allies, Assad and former Iraqi PM Nuri al-Maliki, who played a significant role in the empowerment, if not the formation, of ISIS.
Secretary of State John Kerry said in an interview with Gregory Palkot of Fox News on November 17, 2015:

“ISIS was created by Assad releasing 1,500 prisoners from jail and Maliki releasing 1,000 people in Iraq who were put together as a force of terror types.”

So, “fighting ISIS” is a smokescreen. There are other reasons for Tehran’s direct and profound involvement.

Senior Iranian regime cleric Mehdi Taeb, head of the Ammar Garrison and former commander of IRGC intelligence, said it best. On February 14, 2013, he called Syria Iran’s strategic “35th province,” and explained:
“If the enemy attacks us and seeks to take Syria or Khuzestan [oil-rich western Iranian province], our priority would be to keep Syria, because if we keep Syria, we can take back Khuzestan. But if we lose Syria, we would lose Tehran.”

What should Washington do to prudently resolve the Syrian conflict and to end this century’s greatest humanitarian catastrophe?
The key is to end the occupation of Syria by Tehran. So long as IRGC forces remain in Syria, peace would be an illusion. In Tehran’s absence, there would have been a political solution that could include the removal of Assad from power, not to mention that ISIS would have been defeated as well.

To stave off the threats Iran and Assad pose, the U.S. must pursue a broad-based political and financial backing of the democratic Syrian opposition, supplying them with essential military needs and weapons, while establishing a no-fly zone in northern Syria to protect civilians and to help displaced refugees. Otherwise, the Syrian war will have irreparable international consequences for years to come.