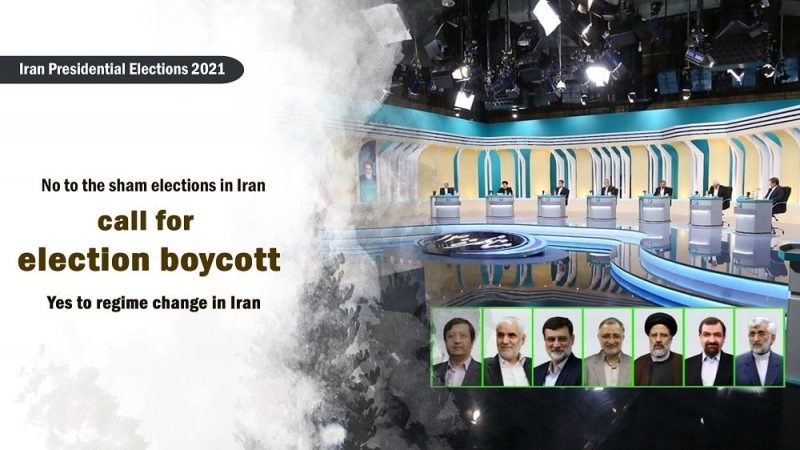 On Saturday, Iranians witnessed the first round of presidential debate of the regime’s so-called candidates. This so-called debate showed the exacerbating infightings in the regime only days before its sham presidential election.

All candidates of sham election started accusing each other of Iran’s economic and social crises and acknowledged some of the regime’s corruption.

The regime’s supreme leader Ali Khamenei eliminated all candidates through his Guardian Council, no matter how much they were involved in the regime’s crimes. Khamenei allowed only seven candidates to run up for the sham election in a bid to keep a democratic façade for the regime. Because all signs indicate, Khamenei has decided to pull Ebrahim Raisi out of the ballot box as a part of his policy to consolidate power in the regime to confront Iran’s restive society, which is on the verge of explosion.

Despite Khamenei’s massive purge of candidates, the hand-picked candidates clashed with one another during the debate, showing the regime’s unstable situation. They acknowledged Iran’s economic and social crisis and the regime’s role in creating and deepening them.

“50% of people are living under the poverty line,” Mohsen Mehralizadeh, one of the regime’s candidates and a former Governor of Isfahan, acknowledged.

“80% of economic licenses are obtained through corruption. We have eleven super debtors with 9 trillion tomans of debt,” Zakani added.

Mehralizadeh referred to Raisi’s low level of education and said: “you have only studied till the sixth grade. How could you manage the country?”

Mohsen Rezaee, the first commander of the Revolutionary Guards (IRGC), blamed Abdolnasser Hemmati, one of the candidates and the current chief of Iran’s Central bank of corruption. “If I become the president, I would prevent you and some of the government officials from leaving the country; then, I would hand you over to the judiciary.”

Raisi, the notorious perpetrator of the 1988 massacre of 30,000 political prisoners, underlined the public’s hatred toward him and the entire regime by desperately telling other candidates, “why would you accuse me so much?”

“Don’t you see how the system’s opponents are attacking me? Don’t you see the number of accusations against me on the internet?” Raisi added.

“Whenever the candidates in the televised debates followed the method of insulting, slandering, destroying the other party, and intimidating the people from the rival, (the regime) lost,” he said.

As Khamenei said, despite his efforts of making his regime unipolar and pave the way for Raisi to be easily pulled out of the ballot box, the factional feuds and infightings showed the regime has lost. in a nutshell, there is no cure for the mullahs’ crises.