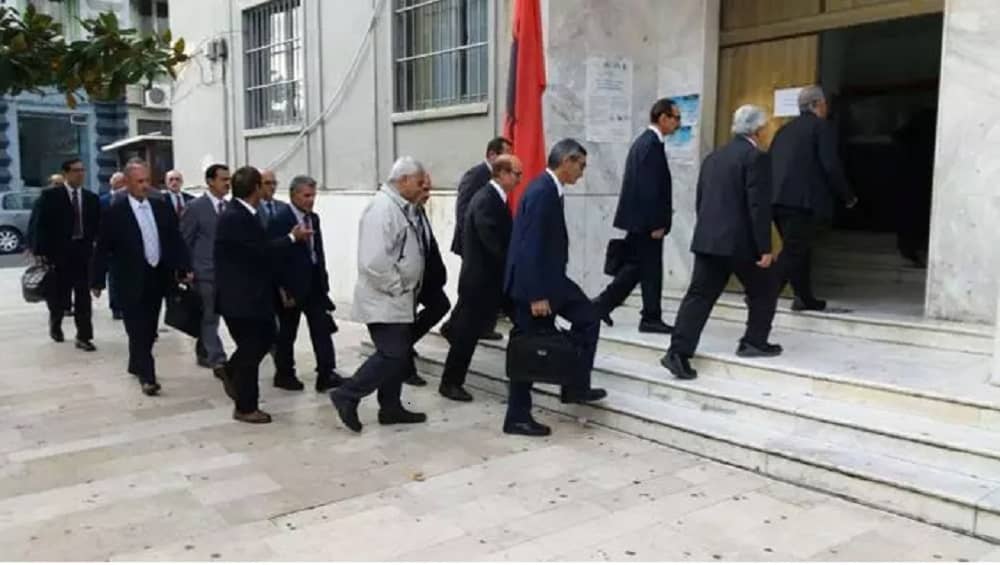 “We told them about the problems of the ward, such as lack of warm water and hygiene issues, Abbasi [Noury] said, ‘Go and thank God that you are alive,” Hassan Ashrafian testified on Thursday during Hamid Noury’s trial.

Thursday marked the forty-first session of Hamid Noury’s trial, an Iranian prison official who is charged with participation in the 1988 massacre of political prisoners. Noury was in Gohardasht prison at the time of the massacre. In 2019, he was apprehended in Sweden.

The last seven sessions of Noury’s trial have been held in Albania. The location of the trial was transferred after 34 sessions in Sweden to Albania per prosecutors’ requests, where there are thousands of members of the Mujahedin-e Khalq (MEK). The MEK members were the main target of the 1988 massacre of over 30,000 political prisoners across Iran.

On Thursday’s session at the District Court of Durres, Hassan Ashrafian, a former political prisoner and a MEK member, shared a harrowing account of the regime’s atrocities in prisons. Hassan Ashrafian was arrested in 1983 for supporting the MEK. He spent three years in Evin and Ghezelhesar prisons. He was transferred to Gohardasht in 1986. Ashrafian was in Ward 3 during the 1988 massacre.

During his testimony on Thursday, Ashrafian described Gohardasht prison’s chain of command.

“Mohammad Mogheyseh, also known as ‘Nasserian,’ was in charge of the prison. As far as I know, Hamid Abbasi [Noury] was his [Nasserian’s] deputy. And Davoud Lashgari was in charge of prison security,” Ashrafian said.

“Nasserian and Abbasi [Noury] prevented us from exercising in prison. In June 1987, we were exercising in the prison’s courtyard. Suddenly 20-30 guards came into the courtyard and prevented us from doing our exercises. They beat us with cables, batons, and metal rods. They blindfolded us and pushed us into the main building,” Ashrafian described his first encounter with Noury.

“They took us to a small hall on the second floor, which the prisoners called the ‘gas chamber.’ They pushed us into the hall as we were still sweating from the exercise and they closed all the airways… after a couple of hours we were all suffocating,” he added.

“One of the inmates, Kambiz Ostovari, protested the situation and knocked on the door. They took him out and beath him,” Ashrafian said.

“After that, they took out the rest of us. The guards stood in two lines and formed a tunnel. They pushed us through the tunnel as we still had blindfolds and they beat has as we passed. I could hear Hamid Abbasi’s [Noury] voice who was saying, ‘Beat these Monafeghs [the term the mullahs use to refer to MEK members and supporters] so that they don’t do such things,’” Ashrafian said.

In another part of his testimony, Ashrafian described his encounter with Noury after the 1988 massacre.

“In September 1988, we were 53 prisoners in Ward 3. Before the massacre, there were 200 people. Of these, six or seven were charged with offenses other than supporting the MEK, while 190 of them were MEK supporters. Of these 200 people, only 53 remained,” Ashrafian said. “In September, the guards came and blindfolded us and took us to ward 13. This is where they brought all prisoners who had survived the massacre. They took a few others in the lower ward.”

“In early October, Abbasi [Noury] and Nasserian came to our ward with several other guards,” Ashrafian recalled during his testimony.

“Nasserian [Moghiseh] started threatening us as was his habit. He said, ‘We killed all of them and we will kill the rest of you later. The era where you could protest, and stage strikes is over. Don’t think our hands are tied. We can execute you like the rest anytime we want.’”

““I was transferred to solitary confinement in November 1988… Then they took me to the lower Ward 1, which was called the Jahad Ward. We were about 70 prisoners who had been transferred here after the 1988 massacre,” Ashrafian said. “There were several cells. Around mid-November, Abbasi and several other guards to our section.”

“We told them about the problems of the ward, such as lack of warm water and hygiene issues,” Ashrafian said. “Instead of solving our problems, Abbasi said, ‘Go and thank God that you are alive. If we wanted to execute the fatwa of the Imam—he meant Khomeini—completely, we would have to arrest and execute half of the people of Iran.’”

In the summer of 1988l, the “Death Commissions,” across Iran sentenced thousands of Iranian prisoners, mostly MEK members to execution. These commissions implemented a fatwa by the regime’s then-Supreme Leader, Ruhollah Khomeini. In his fatwa, Khomeini had underlined that all prisoners, mainly the MEK supporters, should be executed if they refuse to disavow their ideals.

In another part of his testimony, Ashrafian shared what he saw during the massacre. On July 30, the guards take the TV out. They had canceled all family visits starting July 26.

“On those days, they gave us a list and told us to write down our names, accusations, and how long do we have until the end of our sentence,” Ashrfian said, adding “this happened once every two days.”

“On July 30, I was alone in a room where we kept our bags. I saw Davoud Lashgari from window. He was armed, and five or six other plainclothes agents were near him. I also saw two Afghani prisoners with them. They were carrying wheelbarrows filled with hanging ropes. They were going to the warehouse,” Ashrafian said. He calls other prisoners, including Mohammad Zand to see this. One of the prisoners tells Ashrafian that these ropes are for execution.

This warehouse later became known as the “Death Hall,” where prisoners were hanged.

Ashrafian later shared what he went through during the 1988 massacre.

“On August 1, I was transferred to the third floor while blindfolded. I sat in the hall, two or three meters apart from the next individual. Lashgari had placed a table in the hallway, and they would take the blindfolded prisoners to him where they would ask questions. Name, surname, father’s name, first of kin family members who are in prison. Then your opinion about the Islamic republic. Then what is your opinion about the MEK? Are you willing to conduct an interview?” Ashrafian said. “We would say we are supporters. Those who replied we are MEK supporters were separated and taken to other wards and cells. I wasn’t brave enough to say, like the others, that I’m a MEK supporter. I and a few others were returned to the ward.”

“On August 3, I was walking in the Hosseiniyeh room when I heard the sound of a vehicle,” Ashrafian said adding that prisoners, “rushed to the windows. There were five of us there. We heard the slight sound of vehicles and we saw two trucks in the road, one on each side of the road. One of the vehicles had the engine running.”

While the court was progressing, the MEK members in Ashraf 3, Albania, held a ceremony. They paid tribute to the 1988 massacre of martyrs and hailed the perseverance of their ideals and identity as MEK members. They vowed to continue the path of those martyrs until achieving a free Iran.