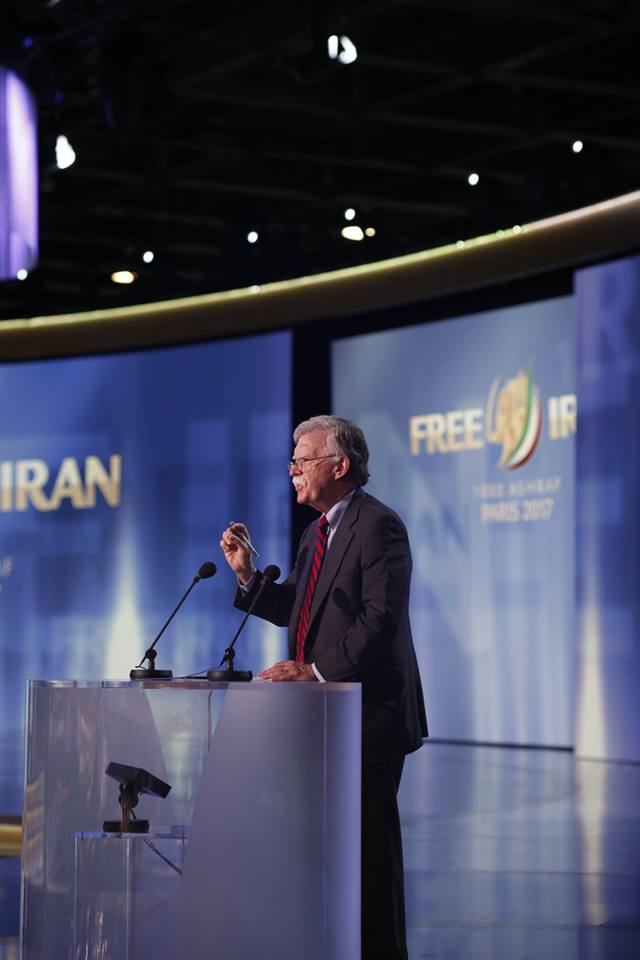 The outcome of the Trump administration’s review of Iran policy should be that the Islamic revolution ushered in under the late Ayatollah Ruhollah Khomeini should not reach its 40th birthday in two years’ time, former U.S. Ambassador to the U.N. John Bolton said at the weekend.

Addressing a mass annual rally in Paris of the exiled Iranian opposition group National Council of Resistance of Iran (NCRI), Bolton drew enthusiastic applause when he said the outcome of the policy review – “and what many of us in the United States are working towards” – “should be to determine that the Ayatollah Khomeini’s 1979 revolution will not last until its 40th birthday.”

Like other American guests at the “Free Iran’ event, Bolton highlighted the changes at the helm in Washington since that NCRI’s last annual gathering a year ago.

For the first time in at least eight years, he continued, “I can say that we have a president of the United States who is completely and totally opposed to the regime in Tehran.”

Bolton said Trump had made clear during the election campaign and in numerous statements – “and even in tweets” – since, that he completely opposes the nuclear deal signed by Obama.

He said the regime’s grip on control was weakening, which was why the changed circumstances in the U.S. were so important.

The declared policy of the U.S. should be “the overthrow of the mullah’s regime in Tehran.”

“The behavior and the objectives of the regime are not going to change, and therefore the only solution is to change the regime itself,” he said. “And that’s why, before 2019, we here will celebrate in Tehran.”

Bolton highlighted two particular dangers and challenges posed by the regime – the nuclear/missile threat, and its push for an arc of Shi’ite influence from Iran, across Iraq and President Bashar al-Assad’s Syria, to the Hezbollah stronghold in Lebanon.

Even if Iran was deemed to be in compliance with the nuclear agreement, he said, the close collaboration between Tehran and Pyongyang meant that once the North Koreans have a nuclear weapon and the means to deliver it, Iran will as well.

“North Korea is already perilously close to the point where they can miniaturize a nuclear weapon, put it on an intercontinental ballistic missile and hit targets in the United States,” said Bolton, who also served as the Bush administration’s top arms control official.

“And the day after North Korea has that capability, the regime in Tehran will have it as well, simply by signing a check.”

That was why, he said, Trump’s views on the regimes in Pyongyang and Tehran were so similar.

On Iranian’s regional ambitions, Bolton said that if an Iranian arc of control stretching across Iraq, Syria and Lebanon was allowed to form, it would “simply be the foundation for the next grave conflict in the Middle East.”

‘A different way of looking at the world’

Saturday’s event in the French capital attracted tens of thousands of participants, including guests from Europe and North America who came to show their support to the NCRI and its leader Maryam Rajavi.

Rajavi said the opposition movement welcomed the statements that came out of the U.S.-Arab-Islamic summit in Riyadh last May, and believed that “the ultimate solution to the crisis in the region is the overthrow of the Iranian regime by the Iranian people and resistance.”

Her call for the international community to designate the Islamic Revolutionary Guard Corps (IRGC) as a terrorist organization was echoed by former New York Mayor Rudolph Giuliani, who said he believed under Trump had step may happen in the U.S.

“We have a different administration in Washington that has a different set of principles and a different way of looking at the world,” Giuliani said. “And under the leadership of president Trump, I believe he can help us rid the Iranian people of the oppression that has subjected them for so long.”

Former House Speaker Newt Gingrich, a Republican, and former New Jersey Sen. Robert Torricelli, a Democrat, were among others calling for change in Tehran, as did Saudi Prince Turki al-Faisal, who served as intelligence chief from 1977-2001 and as ambassador to the U.S. from 2005-2006.

“I want to share with you a dream I have for the Middle East,” he said. “I have a dream paraphrasing Dr. King that all the people of that region, Muslims, Christians, Jews, Shi’as and Sunnis, Israelis and Palestinians, will sit down together at the table of brotherhood and sisterhood and peace and freedom,” he said.

That was the dream of those gathered in Paris, Lieberman added, and the way to realize that dream was to change the regime in Tehran.

Bernard Kouchner, a former French foreign minister and founder of the humanitarian organization Doctors Without Borders, was critical of the French government for hosting Iranian Foreign Minister Javad Zarif the previous day.

“France has the right to receive whoever it wants but to receive the Iranian foreign minister one day before our meeting is not a good idea,” he said.