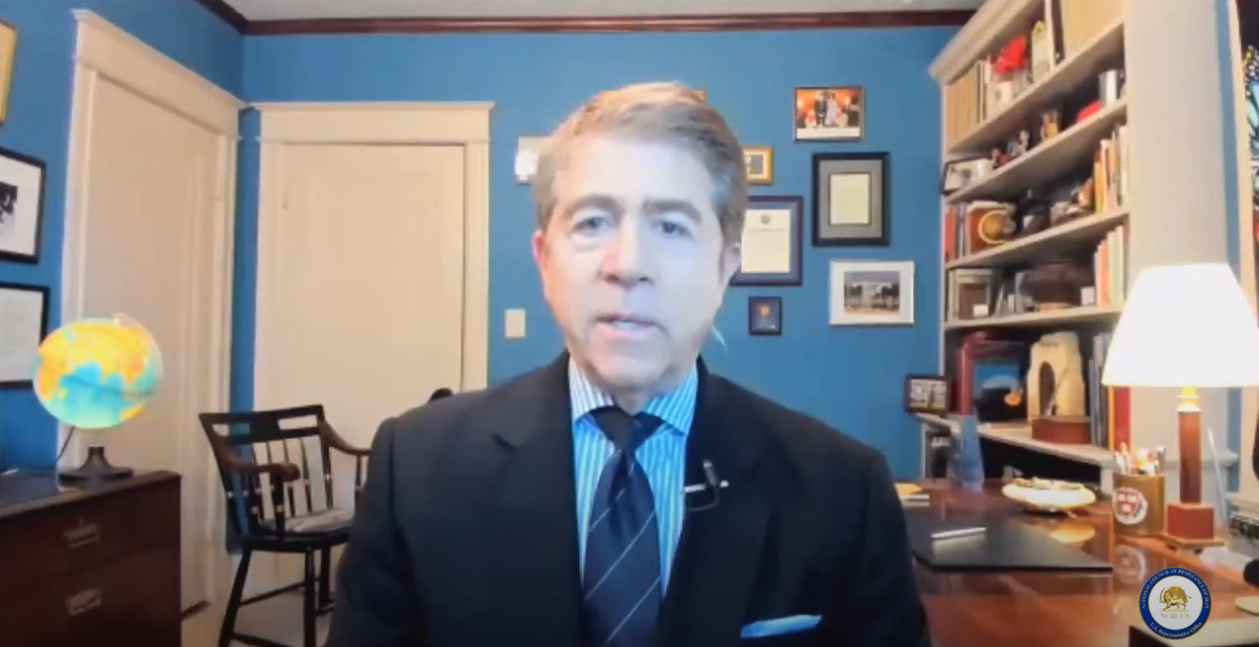 One of the conference speakers was Amb. Lincoln Bloomfield, Jr., the former U.S. Assistant Secretary of State for Political-Military Affairs.

Thank you very much, and my warmest, most heartfelt Nowruz greetings to you and to the NCRI-US office, to our friends at NCRI, our friends in Albania at Ashraf-3, the Iranian American community, and to Iranians all over the world, and to your friends who share in the hopes for a new year.

Of course, this is a very somber time, and like many of your distinguished guests, I’ve been focused on the current crisis in Europe and keeping an eye on, obviously, the negotiations in Vienna, and what is happening around the Middle East with Iranian aggression. And it seems to me they are related.

This is a difficult time for the U.S. government. They’re trying to juggle many things. I sympathize with people who want to stop nuclear proliferation, it’s a very important task. But I also recognize that when Iranian-supplied sophisticated missiles are hitting oil and gas targets in Saudi Arabia with precision, and they are coming from Iran, this too cannot be overlooked. And the question is what to do about it. It’s been frustrating.

And I think what I want to say today and what I want to say in the spirit of Nowruz is that I think that the very horrific events in Ukraine, with Russia’s mass murder of the Ukrainian people, is a pivotal moment in history that will affect the future of Iran and the future of U.S.-Iran relations. Here’s what I mean. It has mobilized the West. It has reminded Americans, who have been debating each other from the left and the right, that we all share very important principles and the need for peace in the world. The Ukraine crisis could escalate to the nuclear level. Let’s hope it does not. But the point is, when this is over, I believe the West will be more reinforced. They will have come together to stand against aggression, to stand against wrong, against criminal violations of the Geneva Conventions, the laws of war. I think Russia will be weakened for some time. I think China will have to think very hard about the lesson of this event. And I think the same thing is true of the mullahs of Iran, although I don’t think they think very much. They simply do what they do and have done for 42 years.

Let me share with you a thought experiment. I don’t want to shock you, but it will keep you awake. What would happen if the United States and other countries lifted all sanctions on Tehran, all of them? Terrorism, human rights, all sanctions. And then said, here, now you should give up your nuclear program, and I mean give it up in a verifiable way. But with one condition: if you violate any of these principles of human rights, terrorism, and so many other things, you will be punished.

I think the challenge, ironically, for the West would be our intelligence community. Our CIA Director, William Burns, in his confirmation hearing, acknowledged very well all of the aggressions that Iran has been doing in the Middle East. So where is the policy? I’ve heard people in the White House say, well, none of this would really be happening if President Trump hadn’t pulled out of the JCPOA. Well, I testified to keep the JCPOA because we already paid for it. I didn’t think it was the greatest deal. But be that as it may, before President Trump withdrew from the JCPOA, Iran was planning a mass casualty attack in Albania. Iran was planning to kill me and many of you in Paris. And that was before, that was while the JCPOA was being fully abided by according to CIA Director Mike Pompeo.

… Iran continues to violate international norms. The crisis in Ukraine reminds us that international norms are what we must live by in a peaceful world. So, when this is over, mark my words, it’s time to have a major conversation about the return of democratic countries, the freestanding world, and groups like the NCRI, to support Madame Rajavi’s 10-point plan, which is perfectly consistent with all of our values, and to stand for these things not just because it makes us feel good but because we need to push back against the deep danger of authoritarians, from Moscow to Beijing to Tehran and elsewhere. This is my hope for the new year.

So, what this tells us is that the regime has been proceeding with the revolution, what they call the revolution, unceasingly. They’ve been committing terrorist acts around the world, they murdered Nisman in Argentina, who was about to brief his legislature on who set off the major bombings in the 1990s. They’ve had MOIS Section 312 teams chasing down Mujahedin-e-Khalq members all over the world, surveilling them, threatening them, blackmailing their families. We don’t hear about any of this unless they end up in court as they did in Antwerp and now in Sweden and in Spain. We need to hear a lot more about the Revolutionary Guards, the Quds Force, the Ministry of Intelligence operatives. Think of it, former Foreign Minister Zarif, who was so well-received by the West, so graciously received, his ministry allowed a mass casualty bomb to be placed on a commercial airline from Tehran to Vienna in a diplomatic pouch. We never heard any repercussions.

So, what I’m saying is this, Iran continues to violate international norms. The crisis in Ukraine reminds us that international norms are what we must live by in a peaceful world. So, when this is over, mark my words, it’s time to have a major conversation about the return of democratic countries, the freestanding world, and groups like the NCRI, to support Madame Rajavi’s 10-point plan, which is perfectly consistent with all of our values, and to stand for these things not just because it makes us feel good but because we need to push back against the deep danger of authoritarians, authoritarians from Moscow to Beijing to Tehran and elsewhere. This is my hope for the new year.

I applaud my colleagues for their thoughts in the seminar. And I wish all of you the very best and hope to be without in this new year. Thank you.

Amb. Mitchell Reiss: There should be no debate over removing the Foreign Terrorist Organization (FTO) designation for the IRGC
Comment
Must deal with Iran from a position of strength and maximum sanctions, states the Heritage Foundation fellow Steven Bucci