MENUMENU
Articles > For Iran’s Feeble Regime, 10 Seconds of TV Shock Was an Eternity

For Iran’s Feeble Regime, 10 Seconds of TV Shock Was an Eternity 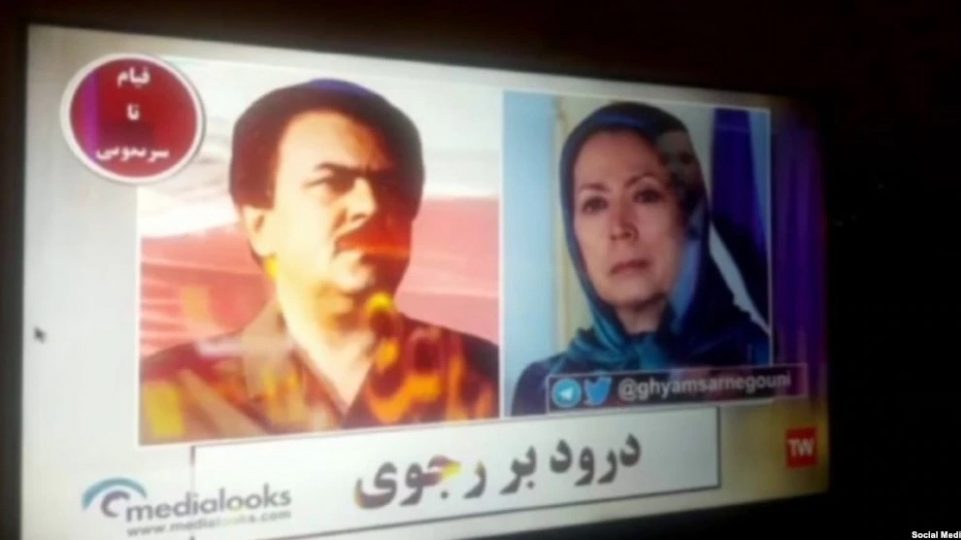 It was 3 PM on Thursday, January 27, 2022. As usual, Channel 1, the flagship network on Iran’s state-run TV, was preparing to air commercials. However, what went on air instead was historic and inconceivable. For nearly 10 seconds, undoubtedly a seeming eternity for the broadcaster, images of opposition leaders appeared on TV screens across the nation.

Without warning, images that the dictatorship has forbidden for 42 years arrested the attention of stunned people all over Iran. Viewers were looking at portraits of the opposition’s leading figures: Iranian Resistance Leader Massoud Rajavi and Maryam Rajavi, the President-elect of the National Council of Resistance of Iran (NCRI). Excerpts of a stirring speech by Massoud Rajavi about refusing to surrender to the tyrannical regime accompanied the images, and voices heard chanting, “Viva Rajavi!” As if that was not devastating enough for Supreme Leader Ali Khamenei, his picture appeared with an ‘x’ plastered on it as a sign of rejection, with voices shouting “Death to Khamenei” in the background.

In total, 14 TV channels and 13 radio stations in Iran’s tightly controlled media were affected. According to field reports, more than 400 servers belonging to the state broadcaster (IRIB) went offline. Many TV channels struggled to return to full programming or display features like news banners for a few days.

The episode sent shockwaves across the country.

Images and messages of Massoud and Maryam Rajavi are strictly banned, and anyone advocating them or the principal opposition movement Mujahedin-e Khalq (MEK) would face sentences like imprisonment or execution in Iran. In 2003, an editor of the Asia newspaper was imprisoned, and his paper shut down, simply for publishing a photo of Mrs. Rajavi.

At the same time, chants of “Death to Khamenei” – although popular in protests – had never been heard on state-run TV before.

Shortly after the shocking affair, security forces reportedly rushed into the state TV and radio offices in Tehran, sealed off the premises, prevented staff from leaving and began to interrogate employees on site. They were on a desperate hunt for “traitors” and “human elements” involved in the effort.

In the end, however, the damage was done. Swiftly shattered was the regime’s hyperbole about its “power.” This is a theocracy that has completely monopolized all sources of information for more than four decades. According to the Reporters Without Borders’ list of press freedoms, it ranks as the seventh most suppressive state on Earth. All media content in Iran is carefully monitored and censored. So, the mere act of penetrating this thick barricade of censorship seemed like a miracle; but has now become a reality.

If Thursday’s TV disruption had happened in a free country like the United States, it would hardly have raised eyebrows. Indeed, American TV shows routinely criticize or mock government officials, including US presidents. However, in an Orwellian theocracy like Iran’s, the news exploded like a virtual nuclear bomb.

Farsi-language satellite channels attempted to decipher the meaning of the event. Moreover, social media was abuzz with a torrent of praise, disbelief, and declarations of joy over Khamenei’s abysmally weakening state and the opposition’s growing prowess.

As state officials admitted the next day, this shocking episode spelled an utter humiliation for the regime, never to be erased. This is because it ripped the propaganda curtains and exposed the reality: A decaying regime comprised of a squad of criminals who are on the brink of being overthrown by an angry population seeking democracy.

Since 1979, the regime has murdered at least 120,000 political opponents, mostly MEK supporters. In the summer of 1988, it carried out genocide by executing 30,000 political prisoners. Nevertheless, the Iranian people’s desire for change has never faded away. People are still risking their lives, so their undying wish for democratic change shines through the regime’s propaganda.

On January 5, the regime erected a statue to commemorate the eliminated terrorist mastermind, Qassem Soleimani. Within hours of its unveiling, young activists of the Resistance Units torched the statue. Again, Tehran’s propaganda was defeated, and the people’s hatred toward the regime shone ever brighter with each flame that reduced Soleimani’s pathetic effigy to ashes.

All this results from a younger generation of Iranians joining Resistance Units and conducting increasingly more courageous acts against the regime. They take down regime posters and banners while organizing widespread protests. It seems that fear among the people has vanished while the ruling regime is increasingly terrified.

State-controlled media in Iran, including those affiliated with the IRGC, warned about the involvement of human elements and infiltration in the heart of the regime State Radio and Television apparatus by the opposition.

The regime is weakening, vulnerable, and on the verge of being overthrown. If 10 seconds can be this earth-shattering, one can easily imagine how minutes and hours of resistance will impact a theocracy wobbling on its last leg.

Read the full article in Townhall