MENUMENU
Articles > Bi-partisan Support in US Congress for a Democratic, Secular Republic in Iran

Bi-partisan Support in US Congress for a Democratic, Secular Republic in Iran 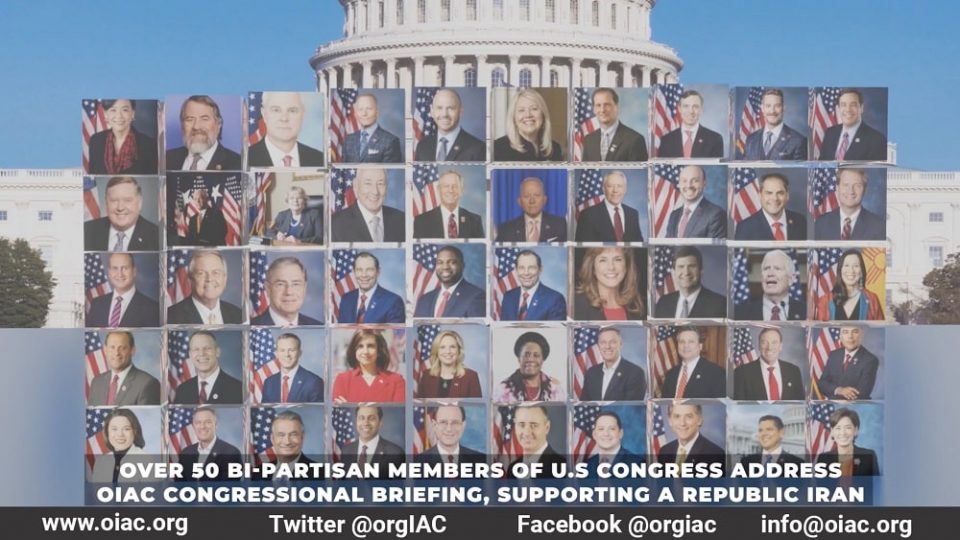 On the 43rd anniversary of the 1979 anti-monarchical revolution in Iran, dozens of members of the United States House of Representatives attended an online conference on February 11, renewing their support for the Iranian people’s democratic aspirations. While praising the Iranian people’s revolution in 1979 which toppled the Shah’s military dictatorship, the U.S. lawmakers underlined that people’s spirit and aspirations that led to that revolution have not faded. They also voiced support for the establishment of a democratic, secular, and non-nuclear republic in Iran.

Mrs. Maryam Rajavi, the President-elect of the National Council of Resistance of Iran (NCRI), also sent a video message to this event, underlining, “Today, there is a democratic alternative that has a powerful social base. It has elevated the widespread social discontent toward a goal-oriented struggle to overthrow the regime in its entirety.”

While praising the efforts of the American legislators in supporting the cause of a free Iran, Mrs. Rajavi said: “We hope that Congress shapes US policy in a way that mistakes committed during the Shah’s regime are avoided and that US policy distances itself from approaches that appease the mullahs.”

“The revolution was about freedom for the Iranian people, and they still want that. So, all this time later, let’s renew the spirit of that revolution and if it’s time to throw off that theocracy, let’s not forget that” Congressman Scott Perry (R-PA) said in this regard.

“The revolution may have started with talk of democracy but ultimately forced the Iranian people to live under an autocratic and corrupt regime that targets its own people and is the chief state sponsor of international terrorism from Syria to Lebanon to Gaza to Europe and South America and across the globe,” Congressman Brad Sherman (D-CA) told the conference. “For too long, the Iranian people have been deprived of their fundamental freedoms, for which reason they rejected dictatorship in 1979 and oppose religious tyranny today. And that’s why I became the chief sponsor of House Resolution 118, expressing support for the Iranian people’s desire for a democratic, secular, and nonnuclear-nuclear republic of Iran and condemning violations of human rights and state-sponsored terrorism by the current Iranian regime.

Congresswoman Judi Chu (D-CA) stressed that “Having such a large bipartisan bill condemning the Iranian government’s support for terrorism sends a clear signal to the people of Iran that they are not alone, that Iranian people deserve to be free from the harsh and violent rule of Iran’s mullahs and the world deserves to feel safe from Iranian support for terror and violence. I support your work to fulfill the dream of 1979 and establish a free and democratic Iran that works with the U.S. and others to build a safer world.”

The American lawmakers also referred to Iran’s ongoing human rights violations and the world community’s duty to support Iranian people in their quest for freedom.

“It is so very important to promote the people who love democracy, and in this anniversary of the 1979 popular anti-dictatorial revolution where people stood up to be able to fight for democracy, we want to say that it is important to receive that democracy and to be able to speak against the massacre of 1988, the political prisoners, the suppression of peaceful demonstrations in 1999 and 2009, 2017 and 2019,” Congresswoman Sheila Jackson Lee (D-TX) said, referring to the ongoing human rights violations in Iran.

The majority of the 1988 genocide victims were members of the Mojahedin-e Khalq (MEK) organization. Following Khomeini’s fatwa, the so-called “Death Commissions” were formed across the country. These commissions were tasked with identifying condemning to death those prisoners who refused to disavow their beliefs. The regime’s current president Ebrahim Raisi was a member of Tehran’s Death Commission.

While underlining that the Iranian regime “regime was guilty of one of the worst political massacres in history, killing thousands of political prisoners who had dared to speak out,” Congresswoman Judi Chu (D-CA) said: “Today the threat of violence remains and instead of facing justice, the man responsible for much of that violence, Ebrahim Raisi, has been elevated to the president where he’s able to continue to suppress democratic aspirations through force.”

“I condemn the Iranian regime’s human rights abuses against its own people, including the massacre in 1988 and the suppression of political demonstrations,” Congresswoman Young Kim (R-CA) joined her Democratic colleague in condemning the 1988 massacre.

Congressman Joe Willson, a senior Republican from South Carolina, also praised those brave souls fallen for freedom in Iran, saying, “We will not forget these dissidents who were abused or killed at the hands of the regime, and we stand with those in pursuit of a secular, democratic Iran.”

Congressman Brad Schneider (D-IL) underlined that “The Iranian regime’s extensive record of abuse spans decades,” urging the U.S. government to “always stand with those who exercise their political rights. We must continue doing everything we can to speak out against Iran’s human rights abuses and hold the regime to account.”

Congressman Blake Moore (R-UT) joined other representatives in calling the world community to “remain vigilant as the terror of the ayatollah extends well past its borders. From Europe to South Asia, Iranian proxies across the globe spread violence, terror, and religious extremism.”

Congressman Brian Fitzpatrick (R-PA) emphasized that: “Iranians deserve the right to choose their own future. Now more than ever, it is critical that we continue to support the democratic aspirations of the people of Iran that have been denied for so long. And in doing so, we must condemn the Iranian regime’s human rights abuses against dissidents and minorities and stand with the people of Iran who continue to hold legitimate and peaceful protests against the oppressive and corrupt regime.”

The conference and its attendees vowed to continue their support of the Iranian people and their calls for regime change and the establishment of the democratically elected republic in Iran. The conference also called on the Western governments, including the U.S., to adopt a firm policy vis-à-vis the ruling theocracy in Tehran, adding that this was the only way to prevent the regime from spreading chaos in the region.