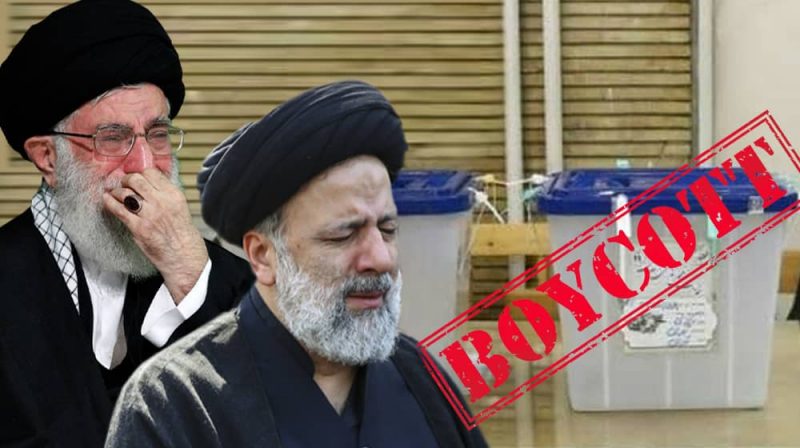 What was at stake in the recent presidential election in Iran is the much-diminished prospects for the survival of the theocratic regime, presently at its most fragile state since 1979. Don’t search for “hardliners vs. moderates.”The regime’s ship is sinking.

Battered by a series of uprisings since 2017, institutionalized corruption, a bankrupt economy, Khamenei finds himself increasingly weak and vulnerable.

The November 2019 uprising was a rude awakening, as the regime could not prevent the protests, which were temporarily curbed only by resorting to sheer repression and exploiting the COVID-19 pandemic.

According to Transparency International, Iran ranks 149 among 180 countries on the corruption perceptions index. People see the theocracy as the first and foremost cause of their economic misery. One of the most  dominant slogans  in the recent uprisings has been, “Our enemy is right here; they lie when they say it is America.”

The 2017, 2018, and 2019 uprisings featured slogans of  “Hardliners, reformers, the game is now over,” and “Death to the dictator,”  signaling that the Iranian people no longer pin any hope on elections as a conduit for substantive change. The Islamic Revolutionary Guard Corps opened fire, killing over 1,500 people during the November 2019 uprising. The images of those murdered in cold blood will never leave the Iranian people’s psyche.

Iran is indeed a powder keg, where even a sudden rise in the price of fuel or eggs could trigger another nationwide revolt. Khamenei is trying in vain to prevent the seismic shift he knows is coming by carrying out a merciless purge of his closest allies, most significantly Ali Larijani, the former speaker of the regime’s parliament for 12 years.

Desperate Khamenei has decided to go all out, whatever the cost. Despite the threat of a massive election boycott, further shrinking of his power base, and debunking the fallacy of his regime’s legitimacy, he seeks to consolidate power in the hands of those absolutely loyal only to him.

In fact, Khamenei has already alienated a significant segment of the elite establishment of all factions, who helped preserve the theocracy over the past 40 years.

Khamenei’s choice is Judiciary Chief Ebrahim Raisi, notorious for his role, as a member of the “death committee,” in the execution of thousands of political prisoners, primarily activists of the People’s Mojahedin Organization of Iran, in summer of 1988, according to Amnesty International and U.N. experts. Many reports suggest that the number of those executed in summer 1988 were as high as 30,000.

Raisi stepped into Iran’s political scene after the 1979 revolution as a pro-Khomeini cleric. Born in 1960, he started training as a cleric in Qom’s seminary at 15, and entered the clerical regime’s Judiciary from early on, as assistant prosecutor in Karaj (Iran’s fourth most populated city) when he was only 19 years old. He became the prosecutor of the Revolutionary Court of Karaj when he was just 20, and eventually rose to Judiciary Chief in 2019.

In 1988, as Deputy Prosecutor of Tehran, Raisi was one of the four individuals appointed by Khomeini to carry out his infamous fatwa to massacre imprisoned activists. An audiotape surfaced in summer 2016, after 28 years, of Khomeini’s designated successor at the time, Hossein-Ali Montazeri, speaking with the “death committee” in Tehran, which included Raisi. Montazeri described the executions as  “the biggest crimes committed by the Islamic Republic.” It was subsequently exposed that Raisi was the most active and most ruthless member of the committee.

Since his appointment to the Judiciary Chief in March 2019, Raisi has directed hundreds of executions. He also oversaw the systematic crackdown and torture of thousands of arrestees following the November 2019 uprising.  Amnesty International reported that “The death penalty was increasingly used as a weapon of political repression against dissident protesters and members of ethnic minority groups” during Raisi’s term. A major case that drew international outcry was the brutal execution of Iranian wrestler Navid Afkari in September 2020.

The Supreme Leader singled out Raisi because of his track record of implementing the most draconian measures to suppress dissent, and an infinite willingness to crack down on the organized opposition.

Iranian society is simmering with deeply rooted rage. By selecting Raisi, Khamenei has put aside the hardliner-moderate charade and has openly recognized the true fight between the people and the regime.

The international community should take note of these new realities, and look at Iran through a new prism. A weaker and more desperate regime is prone to more concessions. Accountability should be the agenda for any future encounters. In any case, an unstable regime is not and will not be a reliable or lasting partner. The United States, Europe, and the countries in the region should instead look to the people of Iran and see them as the true and lasting allies and partners.

The U.S. Administration should heed the call by the bi-partisan House Resolution 118, with 238 co-sponsors in the 117th Congress. The House Majority has declared it “stands with the people of Iran who are continuing to hold legitimate and peaceful protests against an oppressive and corrupt regime, and recognizes the rights of the Iranian people and their struggle to establish a democratic, secular, and nonnuclear Republic of Iran.”

Alireza Jafarzadeh , deputy director of the Washington Office of the National Council of Resistance of Iran, is best known for revealing the nuclear sites in Natanz and Arak in 2002 which triggered the IAEA’s inspections of Iranian nuclear sites. He was also the first to expose Iran’s new nuclear weapons organization known as SPND in July 2011.  He is the author of The Iran Threat (Palgrave MacMillan). His Twitter is @A_Jafarzadeh