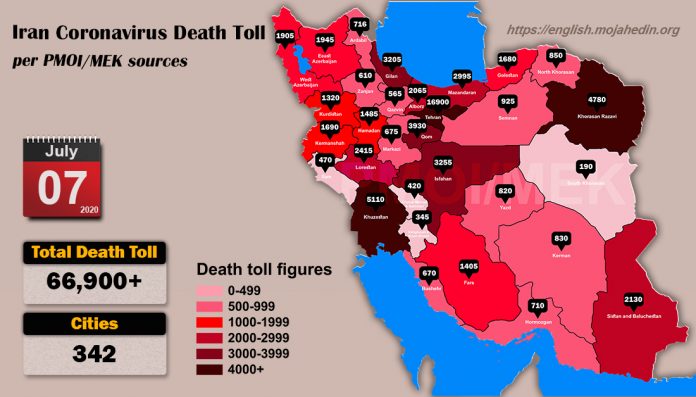 The death toll is so high that the spokesperson for the regime’s Health Ministry quoted by the official news agency, IRNA today, announced that 200 people had died in the past 24 hours, up 26 percent from the highest figures announced in February and March. She said 3,270 patients were under special care and added, “The provinces of Khuzestan, Hormozgan, Bushehr, Kermanshah, Kurdistan, Ilam, West, and East Azerbaijan, and Khorasan Razavi are red, and the provinces of Tehran, Isfahan, Mazandaran, Golestan, Alborz, Kerman, Yazd, Sistan and Baluchestan, Hamedan, Zanjan and Ardabil are on alert.”

According to ISNA, today, the head of Tehran’s city council warned of a surge in the number of Coronavirus deaths. It said, “Yesterday, 70 people who died to Coronavirus were buried in Behesht Zahra.” Alireza Zali, head of Tehran’s National Coronavirus Combat Taskforce (NCCT), told ISNA yesterday, “In the past 24 hours, the number of new patients has risen to 534, which is one of the highest in the past few days … During this time, 84 patients have been admitted to the Intensive Care Units. The situation in Tehran Province is still worrying and unstable … So far, an attempt has been made to strike a balance between the new patients and the capacity of hospitals, but with the increasing statistics, the situation may change.”

Chair of the immunology section at Massih Daneshvari hospital said: “Actually there are no empty beds in this Hospital. We have erected sunshades in open space so patients can wait for hospitalization when beds are available. When the number of patients passes a certain threshold, it is normal that one would not be able to control it,” reported the Khabar-e-fori website on July 6.

According to Mehr news agency, yesterday, the head of Western Azerbaijan Medical sciences university announced the death of 15 Coronavirus patients and six more patients suspected to have contracted the virus in the Province, adding, “Actually, Taleghani and Khomeini hospitals in Urmia are full, and a third hospital has been allocated to Coronavirus infections. He announced the hospitalization of 163 patients in dire conditions in the ICU units, of whom 52 are under ventilators. The new figure sets a new record, which shows a worrisome increase in the number of patients.”

In Khorasan Razavi Province, the head of Shariati Hospital in Mashad told ISNA, yesterday, “All wards in this health center have been devoted to Coronavirus patients; the youth make up the majority of those infected and dead.” The governor of Torbat-e-jam was also quoted by ISNA as saying, today, “We are beyond the red lines, and this is troubling. The Hospital can no longer admit Coronavirus patients.”

In Golestan, the vice-president of the Medical Sciences University told the Tasnim news agency yesterday, “Every day, more than 100 patients are hospitalized in the Province. In the current situation, our only chance is for the number of those hospitalized to equal those released. Some 40 percent of the patients are in critical condition, and 20 percent are hospitalized in the ICU.” He told IRNA today, “Since the beginning of the virus, 11 children have died. In the first peak, 300 medical personnel were infected, and now, in the second peak, 200 physicians and nurses request leaves while suffering from Coronavirus-like symptoms.”

In Kermanshah, the vice-president of the Medical Sciences University told ISNA today, “Approximately 30 percent of people in Kermanshah have been infected with the virus so far… This percentage shows that we have a long way to go before society is safe again.”

In Mazandaran, the figure for those infected in regions covered by two Medical Sciences universities in Babol and Mazandaran has begun to rise rapidly since last week. Now, around 600 patients are being treated in hospitals supervised by these two hospitals… In the past three days, owing to the increase in the number of Coronavirus patients, Babol, Behshahr, Amol, and Noshahr joined red cities. This trend will continue until one more week and again brings Mazandaran Province face-to-face with a challenge,” reported IRNA yesterday.

In Ilam, the governor told Mehr news agency, today, “Coronavirus is on a rampage. Two hundred twenty infected and seven deaths in one day is a disaster. This is an alarm bell for the Province.”

In Hormozgan, the president of the Medical Sciences University said, “Out of 11,000 medical personnel in the Province, 934 have been infected so far. Half of it occurred after the end of May,” according to Hamshahri daily on July 6.

Mrs. Maryam Rajavi, the President-elect of the National Council of Resistance of Iran (NCRI), said the rapid rise in the number of Coronavirus victims across the country, especially in Tehran, to some of which the regime’s officials reluctantly admit, is due to the criminal policies of Khamenei and Rouhani. Instead of providing temporary relief for workers, they force them to go to work in the busiest and most contaminated areas without minimum preventive and treatment resources. At the same time, they blame the people for not abiding by health protocols and for the spread of the virus. This is the strategy of mass casualties to forestall the danger of an uprising and their overthrow.

NCRI-US Deputy Director Discusses Prospects for Change in Iran on Alhurra
Comment
In Defending Human Rights and Free Choice, We Must All Stand Together