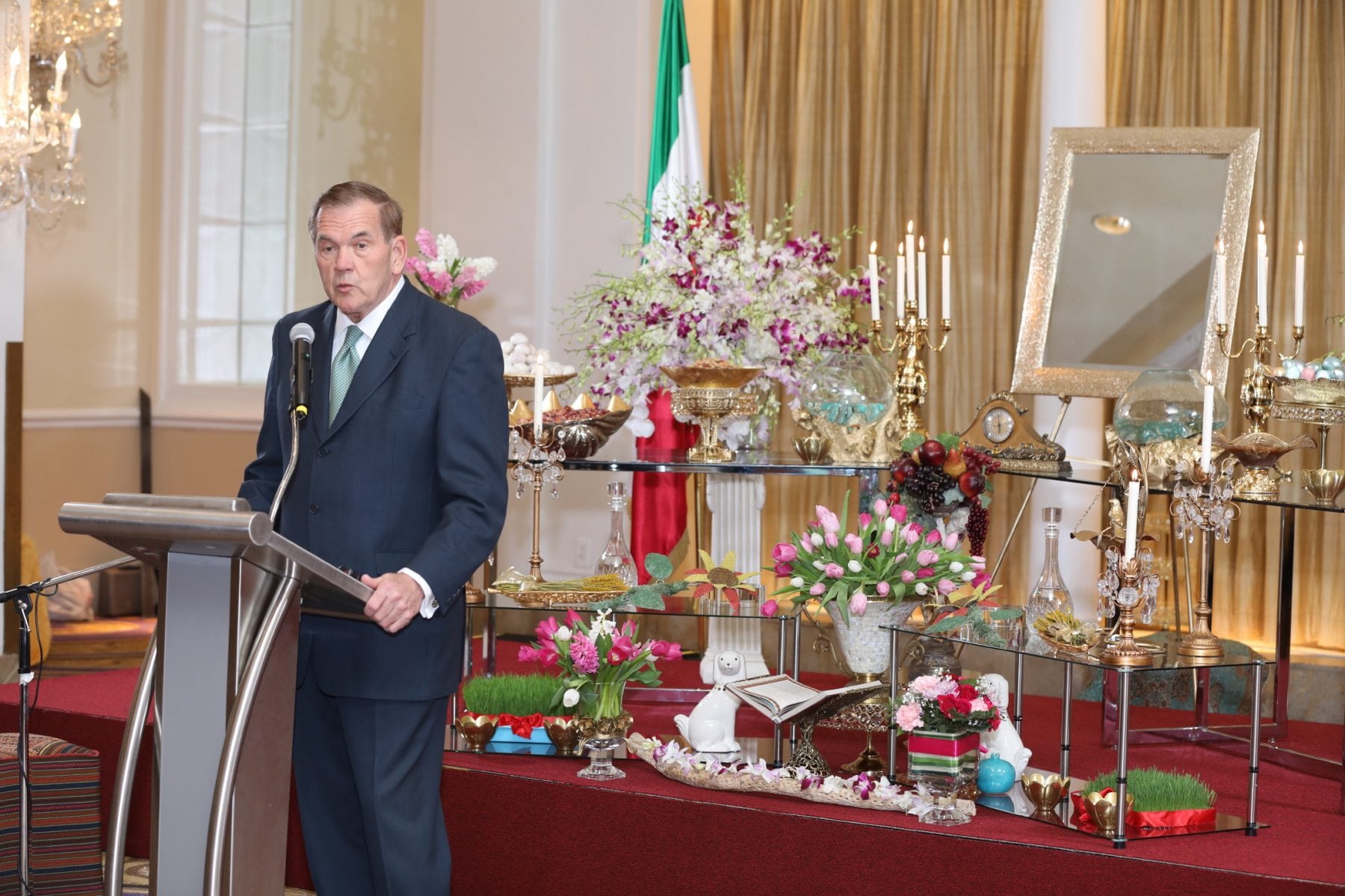 WASHINGTON, DC, March 26, 2018 – At a dinner reception at the Mayflower Hotel on March 23rd, marking the Iranian New Year or Nowruz , several bipartisan former senior U.S. officials spoke on the need for a firm policy to counter the Iranian regime’s malign activities in the Middle East, its pursuit of nuclear-capable ballistic missiles and its crackdown on Iranian citizens.

View all pictures from the event here.

Members of the diplomatic corps in Washington, DC were also present at the event, which was organized by the U.S. Representative Office of the National Council of Resistance of Iran (NCRI-US). Soona Samsami, the NCRI’s Washington Representative, pointed to the December and January uprisings in 142 cities across Iran as a watershed moment as the uprising continues. “On this new year, this new day, we are confident that the era of this detested theocracy is at an end. The horizon holds promise of the rise of a new, free, democratic, secular and a non-nuclear republic in Iran,” Samsami said.

Several of these notable political figures made remarks at the Nowruz celebration, declaring their support for change in Iran and expressing their desires for a brighter future on the occasion of the New Year.

The first Secretary for U.S. Homeland Security and former Governor of Pennsylvania Tom Ridge noted that with all the developments inside Iran, regionally and internationally, the prospects for regime change and the establishment of an independent, free, and democratic Iran are brighter than ever.  “Think of the progress that has been made…those incredible rallies in Paris, France…and those people who showed their support internationally. Think of six or seven years ago and then fast forward and you see delegations from around the world standing in unity in support of the MEK and Madame Rajavi and a free and independent Iran, a tolerant Iran that enjoys the liberties and freedoms,” said Governor Ridge. 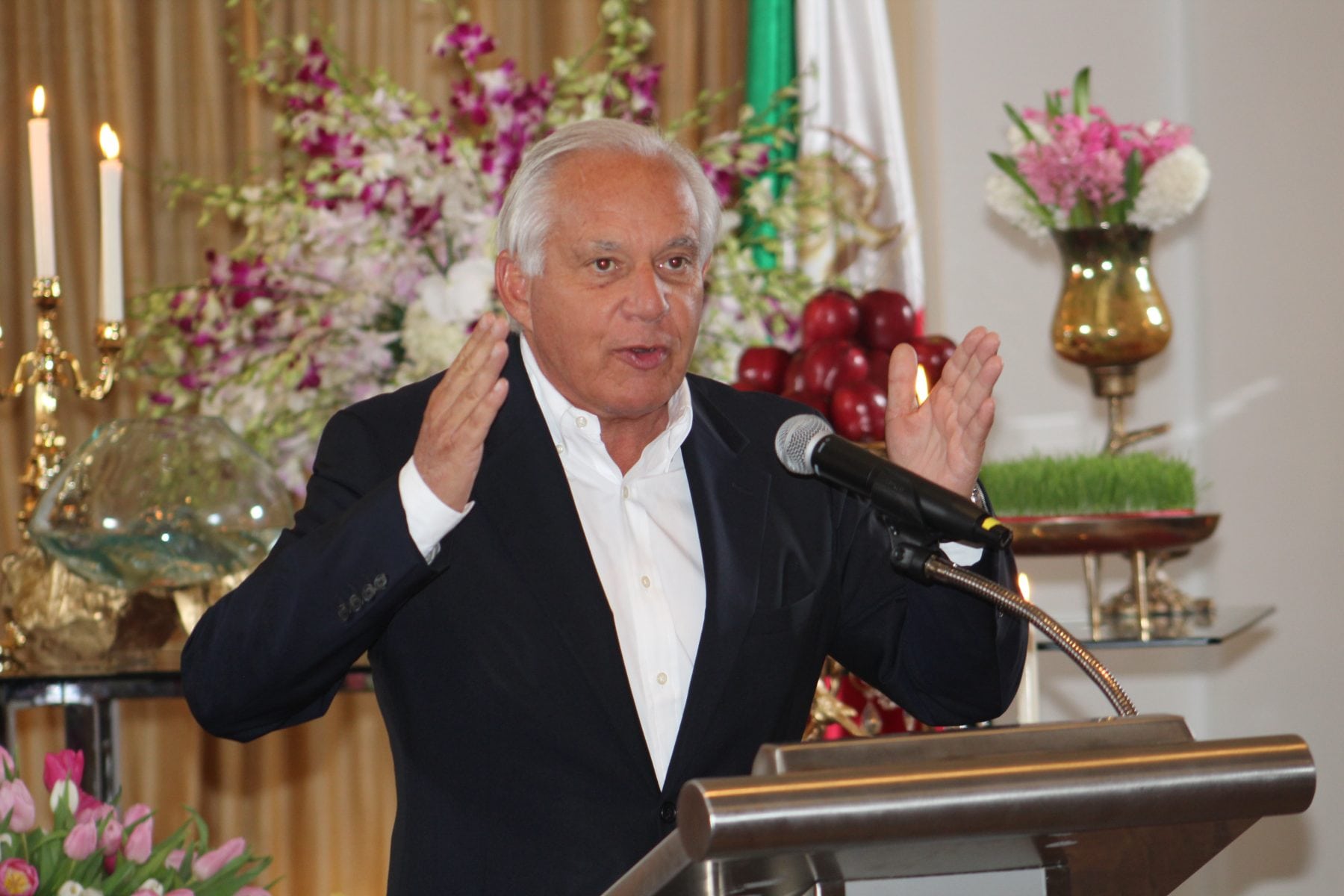 Former Democratic New Jersey Senator Robert Torricelli emphasized that “Each and every one of us commit this year to confront with the same determination as Mrs. Maryam Rajavi and every member of the MEK, who no matter what it takes, how long it takes, no matter how great the sacrifice, no matter how much the effort, that at long, long last the mullahs will fall, freedom will rise.”

Ambassador Lincoln Bloomfield Jr., former U.S. Assistant Secretary of State for Political-Military Affairs, stated “I’m here to salute and to thank the members of the National Council of Resistance of Iran, the members of the Mujahideen-e Khalq, and the brave citizens of Iran…. You are helping America to discover what we stand for as well.  And for that, I will always be in your debt.”

Ambassador Robert Joseph, former Under Secretary of State for Arms Control and International Security, underlined the role of the Resistance in recent uprisings in Iran. “It is very important, I think, to note that the MEK is in the vanguard of the uprisings that we are witnessing and have been witnessing for the last number of months….Madam Rajavi plays an extremely important role by uniting the people of Iran, by providing incentives to those people, by providing inspiration to the people who are risking their lives for the freedom, not only of themselves and their families, but the freedom of all of the people of Iran,” he stated. 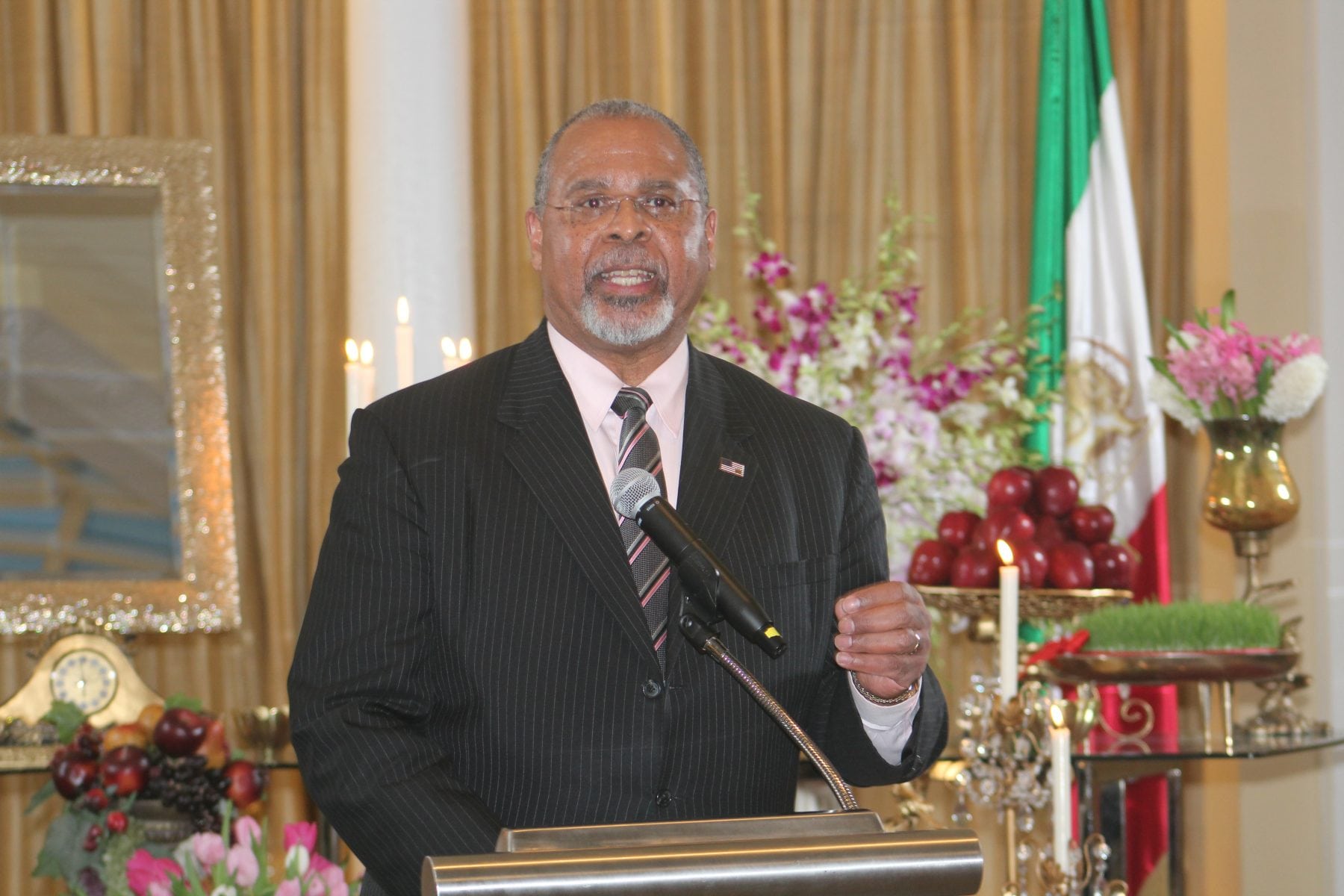 Mr. Kenneth Blackwell, former U.S. Ambassador to the United Nations Human Rights Commission, stressed, “If we are to make our contribution to freedom and to the recognition of the human dignity of others, we must not hide our special light under a bushel. I would just celebrate with you the fact that the MEK and those in the Diaspora have not hid their candle under a bushel, but they have used their candle to light other candles. Together we have rushed the darkness of our time and we have punched holes in the darkness. We have given hope.”

Others highlighted the bright future of Iran on the occasion of Nowruz, which traditionally marks a fresh start or new beginning for those that celebrate it. “This is a year of destiny for us and a year of destiny for Iran. Every year, every Nowruz we take one more step further in achieving the goal that we all share for the people of Iran, for the supporters of the MEK, for Madame Rajavi, to help restore democracy to Iran,” said former U.S. Ambassador to Morocco Marc Ginsberg.

Col. Wes Martin, the senior anti-terrorism and force protection officer for all coalition forces in Iraq, said “I want one big round of applause for the 2,500 people now living in Albania who struggled through Ashraf and Camp Liberty. Those people are our heroes. They endured the toughest of times and they showed us what the price of liberty is, and the fact that they were willing to pay it, and unfortunately 141 of them did pay it… They survived the toughest of times, like the people who are inside Iran right now. They have stood up and they said, ‘We’re going to right and we’re going to make a difference. And they are making a difference.’ The world is hearing them.”

“I salute all of the MEK residents in Albania and I want to wish each of you a happy Nowruz,” added Col. Tom Cantwell, the first commander of Camp Ashraf in 2003. “Indeed, it is a new year. It is a new year here in America with new government and new people in charge, and we hope that it means new policy and new relationship with Iran.  And we hope that that includes a new relationship between the United States government and the Iranian resistance,” he said. 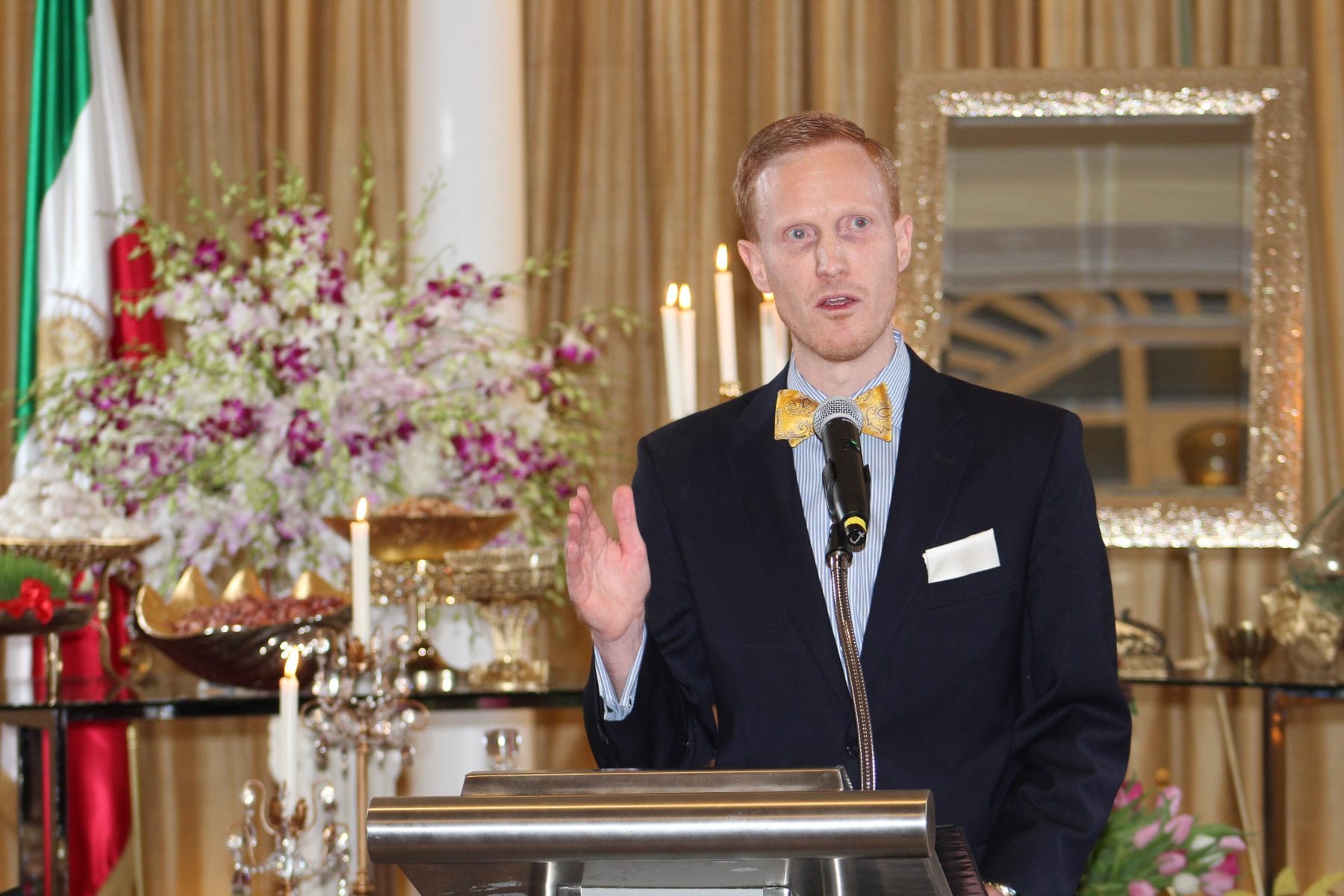 Prof. Ivan Sascha Sheehan, director, M.S. in Negotiations and Conflict Management program of the School of Public and International Affairs at the University of Baltimore added, “Every great freedom movement must eventually come to terms with the fact that to confront injustice, one must acknowledge that it exists. And every movement for freedom must put it on display for the world to see. Therefore, here in Washington, around the world, every believer in democracy and human rights should keep a close eye on Iran in the year ahead. Because it’s my firm conviction that with support from the international community, the Iranian people may finally achieve a new system of government that embraces not only democracy but also civil and political, religious and cultural liberty for Iranians of every demographic background.”

In addition to these remarks, renowned Iranian composer and conductor Mohammad Shams was joined by Behi and Afshari to perform a number of Iranian musical pieces while Uncle Nowruz, a traditional figure of the holiday, distributed Persian nuts to the guests. 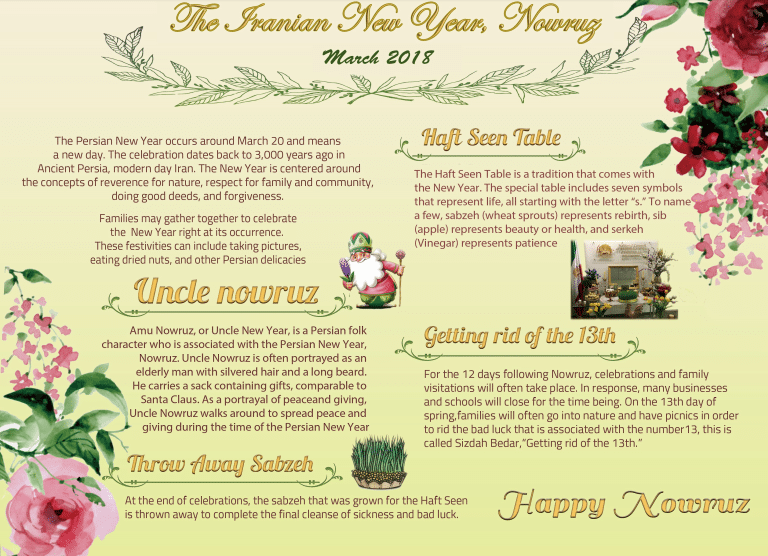