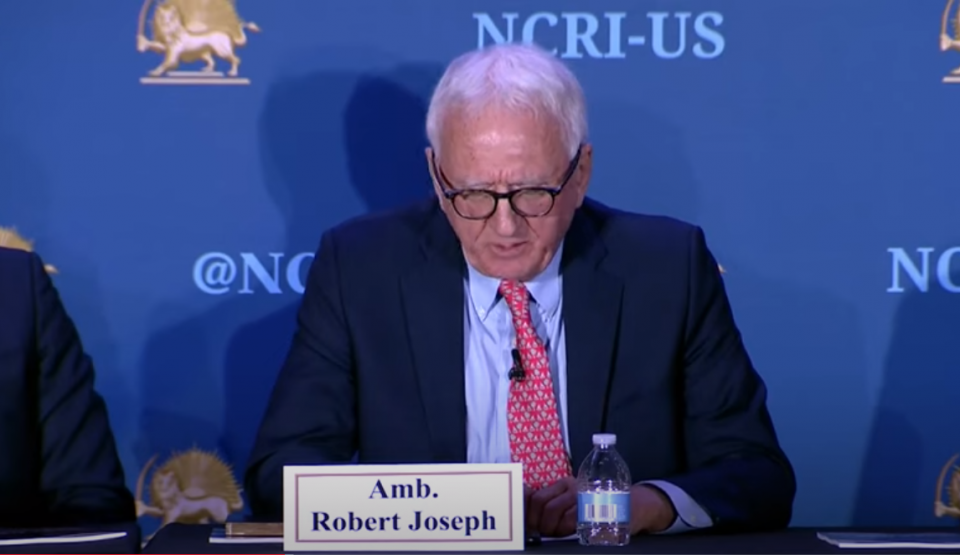 First of all, let me say good morning. And Alireza, thank you, I appreciate the opportunity to join you today with such distinguished and accomplished colleagues and friends. We are, I think, meeting at a critically important time. And I’m, like others, not referring only to the nuclear negotiations in Vienna, which currently dominate the headlines. I am referring to the broader geostrategic interests at play, and specifically the future of the religious dictatorship in Tehran.

Certainly, the Vienna talks can affect that future. The Biden administration continues to seek an agreement, in my view, at almost any cost. Despite some recent tough talk and some recent limited, almost symbolic steps such as the application of sanctions that we’ve seen in the last several weeks. But overall, the administration seems more than willing, in fact, I think it seems enthusiastic, about playing a high price for a bad agreement. And the higher the price, the more resources the regime will have to devote to its nuclear weapons and missile programs, as well as to pursue its aggression in Syria, Yemen, and elsewhere. And I think most importantly, resources to oppress the Iranian people through brutal force and mass killings.

Senator Lieberman has done a much better job than I could ever do in capturing the essence of what I believe is now a time for the decision. The correct decision, both politically and morally, on which we will I think be judged by history, is to support the people of Iran in their struggle for freedom and democracy. This is a deplorable regime that wants the United States, Europe, and others to focus not on its internal vulnerabilities, but on the JCPOA negotiations, as those negotiations provide both a sense of legitimacy and a convenient diversion from its desperate domestic situation. And if successful, the result will serve as a lifeline for Iran’s rulers.

I’ll return to this point, but first let me say that the report being released today provides a wealth of information on Iran’s drone program, an increasingly significant tool of the regime. Published by NCRI, the report [IRGC’s Rising Drone Threat; A desperate regime’s ploy to project power, incite war] is informed by numerous sources inside Iran, primarily members of the MEK who at the risk of their own lives, have worked to expose the true nature of Iran’s leaders. The high value placed on drones is reflected in the number of resources that have been committed to acquiring a large and sophisticated UAV arsenal, both through domestic production and through the illicit procurement of advanced components abroad.

Drones have substantial tactical value for the regime. But the principle strategic value is best understood in the broader geostrategic context that I just mentioned. Having lost all legitimacy at home, the regime sees its very survival as a function of its ability to export its influence and ideology outside of Iran. Drones, like ballistic missiles, serve this purpose by providing a means of intimidation and attack. For this reason, the regime will never give up this capability in my view, and in my view, this must be a factor in the design of policies and capabilities intended to counter Iran’s aggression.

As the Biden administration continues what I believe is a quixotic attempt to restore the 2015 nuclear accord, it should keep in mind the lessons and the unintended consequences of that agreement, especially the lifting of sanctions and the providing the regime with billions and billions of dollars to devote to weapon systems such as drones. The expectations of the Obama-Biden administration have been proved to be both false and dangerous. And yet we continue to have those same expectations.

The illusion that Iran can serve as a stabilizing force in the region can only be explained by the triumph of hope over experience. But perhaps the greatest fallacy of the Biden approach is the belief that it can negotiate in good faith with this regime, and that if there is an agreement, Iran will live up to its commitments.

The JCPOA was portrayed as a means to engineer positive change inside Iran by strengthening the so-called moderate faction, supposedly headed by President Rouhani against the hardliners. We now know what actually happened to the windfall that was delivered to the regime. The money that was not siphoned off through corruption was used to acquire even more deadly arsenals of missiles, drones, and other weapons to support the murderous Assad regime, the Houthis, and others including Iran’s terrorist proxies. The Biden administration in rejecting these concerns has stated that rejoining the JCPOA is only the first step, a step that will be followed by negotiations to address the agreement’s flaws such as its failure to limit ballistic missiles and curb Iran’s malign behavior in the region. Yet we all know, we all know that when U.S. sanctions are lifted as a condition of rejoining the agreement, it will be the last step, not the first step. The U.S. will have again paid a high price for a bad deal, a price that includes more missiles, drones, more aggression, and more repression.

The illusion that Iran can serve as a stabilizing force in the region can only be explained by the triumph of hope over experience. But perhaps the greatest fallacy of the Biden approach is the belief that it can negotiate in good faith with this regime, and that if there is an agreement, Iran will live up to its commitments. On this score, people matter as much if not more than stated policy, and the team installed by the Supreme Leader after the fraudulent elections this past September makes evident that the underlying assumptions of the Biden strategy will only produce further failure. Just look at the rogue’s gallery that constitutes the new Iranian leadership, at least ten of whom are currently sanctioned by the United States, Europe, and the United Nations.

Foremost of course is President Raisi, who served as a member of the death committee in the murder of thousands of political prisoners in 1988, a true crime against humanity that has recently been described by over a hundred European parliamentarians as an act of genocide. These executions aimed primarily at the MEK have been widely condemned for decades, with human rights groups calling for an investigation into Raisi’s part in the killings. In 2019, the United States condemned Raisi’s appointment as the head of Iran’s judiciary and sanctioned him, citing his role in the mass executions and his participation in the brutal repression of protesters following the 2009 sham election. The selection of Raisi as president reflects, in my view, the moral bankruptcy of the mullahs, and most of all it reflects their fear of the Iranian people’s call for justice.

Today the mullahs’ desperation is palpable. We can see it in the calls across Iran for an end to the corrupt regime. The people of Iran have seen their beloved country become a prison to those inside and a pariah to those on the outside.

President Biden stated at the recent democracy summit just last week that the world is at an inflection point in the competition between democracy and autocracy. And on this point, he’s correct. But he should practice what he preaches. The choice is clear: we can pursue misguided and failed policies that provide resources to the oppressors, or we can support the Iranian people in their struggle to overthrow their oppressors through regime change from within.

It’s a false choice, but one that we hear frequently, that we must choose between diplomacy and war, between negotiation and war. But appeasement of evil regimes through diplomacy is the wrong choice, as we know from history, and it often leads to war. The right choice is not war or military invasion. The right choice is to support the resistance to this regime, the resistance that upholds the values of democracy and human rights. Mrs. Rajavi’s plan of action, the well-known 10-point plan, provides exactly that vision. And the organized opposition within Iran provides the means to achieve the goal of a free Iran. Thank you.