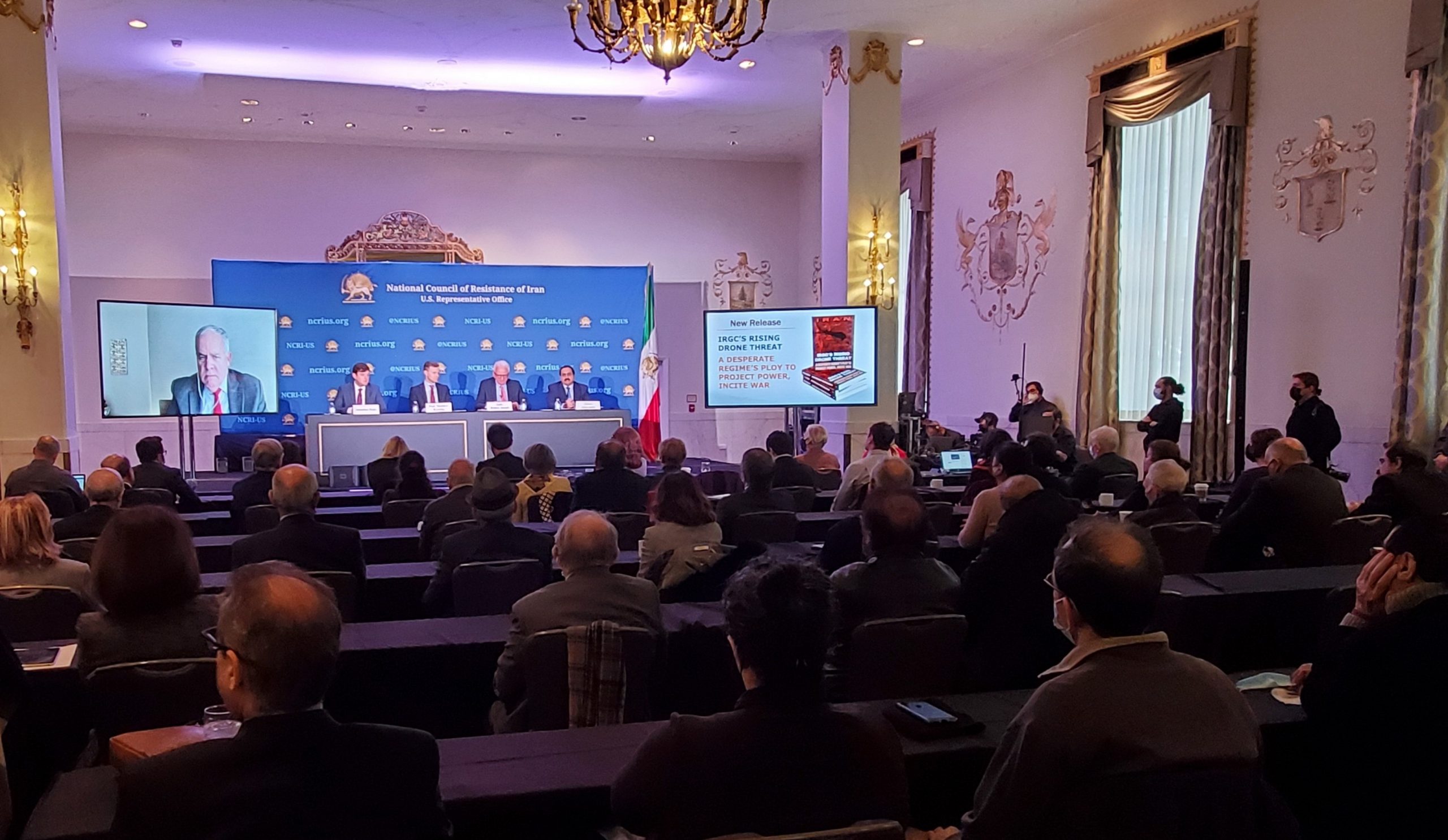 Good morning to everyone. And Alireza, thank you for this opportunity to join you today on what is a very, very important topic. As both my predecessors on this august panel have already commented, and they’re a very tough act to follow.

I can tell you that there is no topic of greater interest and of greater priority than this one in terms of talking about Iran, its behavior, where the United States stands on it, along with its allies, and at the present time in terms of the impact it has not only inside Iran, which others have already spoken so eloquently about and I’m sure we will hear from the fellow panelists further about that, but also in its near abroad and then its reach around the globe in terms of promoting its hardline policies.

Serving as an intelligence officer, I also want to thank the NCRI, much as Senator Lieberman recognized. You are in essence an intelligence organization, collecting at great peril information inside a despotic environment in which you can quite literally say take no prisoners when it comes to collecting on the UAV program and many of the other aspects that you are engaged in. And then find a way to share this with the public and have that awareness created by the great work that you are doing in terms of sensitizing the world as it pertains to the activity of this despotic regime.

When I think about Iran and the motivations that I even had in joining the intelligence services in the United States, it was really in 1979 and the hostage-taking that was a primary motivator to dedicate my career for over three decades to intelligence and understanding regimes like Iran and how to counter their activities. What I find fascinating by way of a backdrop is that the Iranian regime, really since 1979, has had a very expansive definition of what it believes constitutes a foreign policy by being consistently on the offense. And by being on the offense, I mean they have taken matters in their own hands in where they will go, anywhere at any time, and their reach is pervasive and ubiquitous in going after anybody that expresses dissent. And to this end, we know full well that this regime for now over 40 years has continued to target dissidents abroad. It has targeted journalists. And there is no end in sight in terms of their support for those who are willing to speak up and then become the target of their wrath.

And to that end, when I think about the attempted actual assassinations in about five countries since 2015/2016 in Europe, in the Middle East, and even in the Americas, I find that there is no sign of diminishing their intent to go after those who oppose the regime and speak out for the kinds of values that Senator Lieberman and Ambassador Joseph have already referred to. And to that end, I think the fraudulent election associated with Raisi and the Supreme Leader Khamenei’s role in supporting this is only going to become more hardline in terms of the pursuit of their opposition in their near abroad and anywhere around the globe that it expresses itself. And there are no limits to what they might use by way of the tools in their kit to do this.

Let me just point out three things that I want to emphasize before very briefly addressing what to do in response, to add to what both Senator Lieberman and Ambassador Joseph have so eloquently shared by way of a response to the Iranian regime, all of which I fundamentally support. Issue number one is the asymmetrical use of technology provided to Iran. Their ability, for example, and there is no current better example that you have provided to this wonderful report [IRGC’s Rising Drone Threat; A desperate regime’s ploy to project power, incite war] in terms of the richness of it, of the UAV drone program. This is a technology that has gone in the past two decades from being unattainable by the vast majority of countries to highly reachable in terms of both price points and then capabilities in which to use the drones. But it is just simply one example of many in which the asymmetrical nature of the technology that is available at market price to a despotic regime that they can use to provide pervasive either surveillance or in some cases even kinetic capabilities as a result of that.

The second observation is the internet, and the ability by Iran at a fairly high level of sophistication to use the internet as a means for targeting people, be it through their fishing exercises and attempts as well as disruptive attempts as we saw with the case of Saudi Arabia and (Aramco) and their ability to go after their defined adversaries in a way that they use the 1s and 0s to pervasively go after them in that regard.

It occurs to me that the last thing you want to do is take the foot off the proverbial pedal on the pressure on the Iranian regime. And this idea that any kind of lifting of sanctions or of providing sanction relief will be met with a response of kindness and understanding and making concessions on the part of the regime is an entirely false premise which is not supported by history in any way, shape or form.

And the third observation that I would make is their proclivity, and that requires two sides of that equation, to enter into agreements with what is emerging, and Senator Lieberman talked about this return to greater power competition or great power competition, in this case, of China and Russia. And the two regimes in the case of Xi Jinping in Beijing, and Vladimir Putin in Moscow, who clearly do not share American values or certainly the traditional American values of democracy and human rights, and the partnerships that they’re making which are longstanding in the nuclear file in terms of Iran and missile file as well in terms of Iran, but this is broadening and deepening in the sense of those ties.

So how do we respond to it? It occurs to me that the last thing you want to do is take the foot off the proverbial pedal on the pressure on the Iranian regime. And this idea that any kind of lifting of sanctions or of providing sanction relief will be met with a response of kindness and understanding and making concessions on the part of the regime is an entirely false premise which is not supported by history in any way, shape or form. So, one is continuing the pressure. And Alireza, you clearly made that point in your opening remarks.

Support the internal opposition so that the focus of the [Iranian] regime continually goes back inside Iran as opposed to the export of their nefarious activities, be it in Iraq, Lebanon, Syria and elsewhere around the globe, so that they have to attend to the kind of internal pressures that emerged from that opposition.

Secondly, it’s finding ways, as Ambassador Joseph has already referenced, how do you support the internal opposition so that the focus of the regime continually goes back inside Iran as opposed to the export of their nefarious activities, be it in Iraq, Lebanon, Syria and elsewhere around the globe, so that they have to attend to the kind of internal pressures that emerged from that opposition, which as you pointed out, Alireza, is becoming stronger and more vocal in recent times. And so this is an opportunity for the Biden administration to actually show support for the internal opposition. And by doing, so one of the things that I would argue vehemently for is to bring them the internet through satellite and access to outside information, as I think people long to be free and long to have information delivered to them in a manner that is uncontrolled and unconstrained as the regime clearly wants to do.

And thirdly, it’s to again use the international forums but with the United States in the leadership to really keep the human rights issues at the forefront and place the regime clearly in the crosshairs of one of if not the greatest human rights violator in the world at present time, along with China and its treatment of the Uyghurs and elsewhere, but certainly all in that category of countries.

I look forward to the questions from the audience, and with that, I will turn it back to you with those initial thoughts at this point. And again, thank you for this opportunity.