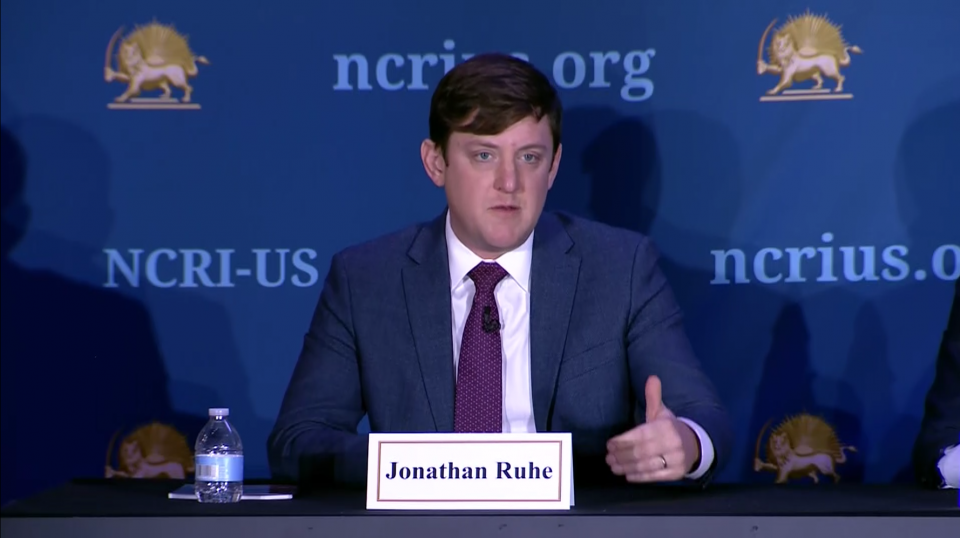 Thank you very much, Alireza. it’s an honor to be back here with NCRI-US. I and my organization support the goals of NCRI-US. And we’ve been focused on addressing the comprehensive range of challenges posed by Iran both to the Middle East, the global order more generally, and also inside Iran itself.

I’m going to pick up on an issue that has been addressed at the broader strategic level, but I’m going to jump down a little bit to more operational considerations, which is Iran’s growing use of drones or UAVs. I would join my panelists in recommending the new book that’s been released today [IRGC’s Rising Drone Threat; A desperate regime’s ploy to project power, incite war]. As someone who’s been citing this issue for years, there just is a wealth of new information on the structure, roles, organization, capabilities of Iran’s growing drone program. And I’m really specifically going to pick up on one issue which the book lays out in great detail, which is Iran’s use of drones to project power around the Middle East. It gives it an ability to compensate for many of the internal inherent weaknesses of the regime that have already been laid out very well by the preceding panelists.

And so what my organization does, and what I’ll use as the stepping-off point from the book that’s been released today, is what we call the Iranian projectile threat. And drones are central to this, but we also look at non-nuclear ballistic and cruise missiles, because I think they’re increasing of a kind in terms of how Iran is improving these capabilities and how it seeks to use them. And I would just point out that often drones of the type that Iran uses for attacks, which are often sort of one-way kamikaze drones where the vehicle and the warhead are one in the same, are often referred to as a poor-man’s cruise missile. So, we’re talking about a sort of overlapping set of capabilities here.

The bottom line is essentially that Iran is able to compensate for its weakness at home, projects strength abroad, due to a combination of three factors it’s exploiting I think in a very sophisticated fashion. The first, as the book lays out, is Iran’s concerted improvements to its drone and missile capabilities just in the past five or six years, especially since it enjoyed all the sanctions relief from the JCPOA nuclear agreement. Iran has plowed millions of dollars, the figures range, but certainly, it’s made a concerted effort to improve the range, the payload, the maneuverability, and the accuracy of its drones and cruise missiles to the extent that they can pose capable threats not only to point targets around the region but also even more mobile targets like ships plying the Persian Gulf or even the Red Sea. And so, Iran increasingly uses drones and missiles in mixed swarms to overwhelm the region’s air defenses, and it does so I think in a startlingly effective manner which I’ll get to in just one second.

The second factor, as the new book points out, is Iran’s ability to proliferate these capabilities around the region. Yemen, Lebanon, Iraq, Syria, while also using Iran itself as a base for launching these attacks. And what that does is it essentially encircles the Middle East, U.S. allies in the region, and U.S. bases in the region, with overlapping fields of fire, or as the Israelis call it, the ring of fire. So, you can’t just look at attacks coming from one direction, you have to have sort of a 360 perspective. And this further complicates air defense efforts by the United States and our allies.

And thirdly, and I think this is somewhat underappreciated, is the lack of strategic depth in defense by the United States and our allies in the Middle East. The famous statistic that I’m sure you’ve heard before is a concerted attack on Saudi Arabia’s lone desalination plant could essentially deprive the country of potable tap water for a year. But you look at ports, seaports, skyscrapers, palaces, each of the countries in the region, these valuable strategic assets and critical infrastructure are all concentrated in a very small number of targets that Iran can hold at risk for the reasons I’ve laid out. And so what this creates is a situation where Iran’s drones are becoming weapons of mass effectiveness that help compensate for the regime’s weakness at home and give them strategic leverage.

Just very quickly, it was mentioned earlier this 2019 attack on the Saudi energy facility at Abqaiq and this was sort of Iran’s, for lack of a better term, proof of concept for this new range of capabilities. And it checks all three of the boxes that I just laid out. It was a mixed swarm of long-range drones and cruise missiles, 25 in total. The attack came from an unexpected direction. I think the Saudis understandably expected such an attack to come from the south, from Yemen. It came from the north, from Iran. Again, the book lays out in greater detail than I’ve seen before. And thirdly, it targeted critical infrastructure. It hit one of the world’s biggest oil processing facilities. And I think tellingly, the debate inside Iran when they were getting ready to hit Abqaiq is they also looked at a U.S. military base, a seaport, and an airport before they finally decided on striking the oil facility. And from experts I’ve spoken to within the region, this attack could have been much, much worse than it was. It was successful. Most of the drones and missiles hit their targets accurately. But if Iran wanted to, this could have been much more dangerous and catastrophic.

Secondly, and this picks up on what many of my preceding colleagues have said, is genuine sanctions enforcement on a lot of Iran’s ability to obtain dual-use materials to enhance its drone program, and also penalize countries that help Iran further these capabilities.

And just to close out my remarks, since that attack on Abqaiq you’ve actually seen drones become increasingly central to Iran’s projection of power around the region, its threats, and attacks to the United States and our allies. In 2018, when the Trump administration left the JCPOA, Iran used drones for about 19% of its attacks around the region. Today that number is tripled to about 60%. Additionally, three years ago Iran used an average of just over one drone per attack. That also has tripled, which reflects the growing use of these capabilities in swarms to overwhelm and confuse air defenses. So it’s certainly a growing problem.

I hope my comments have amplified what the book lays out in great detail. And I would just say in terms of steps going forward, things the United States and our partners can do, I think one is looking at the Middle East and the changing strategic context in the region. In just the past year-plus, driven largely by a shared threat from Iran, we’ve had the Abraham Accords, which while most of the cooperation has been economic there is room to bolster defense cooperation in the region, including I think one of the highest priorities would be greater efforts to integrate regional air defenses. That’s a high bar but there are certain steps the United States can take with its allies in the region to begin bolstering those defenses and countering Iran’s ability to impose costs and develop strategic leverage throughout the region.

Secondly, and this picks up on what many of my preceding colleagues have said, is genuine sanctions enforcement on a lot of Iran’s ability to obtain dual-use materials to enhance its drone program, and also penalize countries that help Iran further these capabilities. Because I think what we’ve seen so far has been laid out before, the Biden administration is conspicuously underenforcing sanctions as a way to try to keep Iran at the table and find a way to say yes to reentering the JCPOA or some even worse, less for more deal.

And then finally, I think it would send an important signal to Iran, especially as we’re sitting with them, or sitting at a different hotel from them in Vienna, signal that the United States is serious about considering other options. Iran does this all the time, we saw it in the past two years around the Middle East. They’re willing to talk with us, or indirectly to us, at the same time they’re willing to ratchet up the pressure through kinetic attacks around the region. And by and large, I think the U.S. response has largely been deafeningly silent.

We just stood up a new task force in the Middle East, Task Force 59, to use unmanned platforms specifically for maritime security. I think this is a great area where the United States can start deploying unmanned capabilities to protect a lot of our assets around the Middle East, especially in the Persian Gulf, to begin denying Iran the ability to actually carry out a lot of these attacks, which I think if left unchecked will only continue to grow. So, thank you very much. END