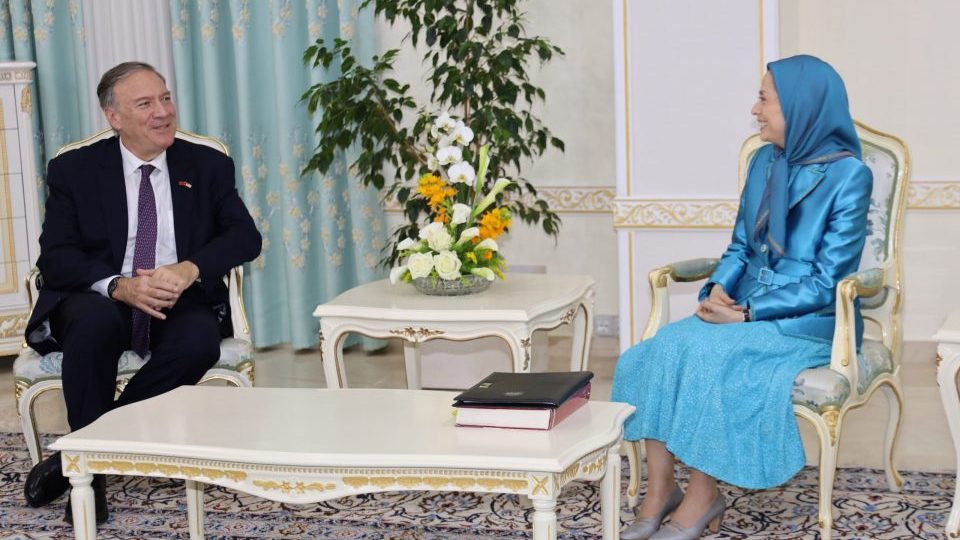 Secretary Pompeo: “I’d also like to recognize President-elect Maryam Rajavi. Under her leadership, the National Council of Resistance of Iran is laying the groundwork for a free, sovereign, and democratic republic of Iran.”

Mike Pompeo, the 70th U.S. Secretary of State, traveled to Albania this week to visit Ashraf-3, headquarters of the People’s Mojahedin Organization of Iran (PMOI/MEK), the main organized Iranian opposition and principal member of the democratic coalition, the National Council of Resistance of Iran (NCRI).

Ashraf-3 has been home to nearly 3,000 MEK members since 2016. In prior years, the MEK resided in Iraq where, after the 2003 invasion, the Iranian regime launched various attacks to destroy their bases at Ashraf 1 and 2, and kill all MEK members. Despite an all-out siege and several brutal massacres led by the Iranian regime’s proxies in Iraq, the members of MEK persisted and in 2016 were relocated to Albania.

During his five-hour May 16th visit, Secretary Pompeo held talks with Mrs. Maryam Rajavi, the President-elect of the NCRI, and with whom he addressed thousands of MEK members, and then visited the various pavilions of the Museum of Resistance.

The historic visit is especially significant as it coincides with heightening anti-regime protests sweeping Iran and bipartisan calls on the administration for a new, effective policy, beyond the JCPOA, which promotes the aspirations of the Iranian people.  Clearly, the voice of the Iranian people is being heard across the globe.

The former secretary of state discussed the Tehran regime’s worsening political situation and weakening grip on power, the failure of appeasement-centric diplomatic engagement with Tehran, and the imperative of standing on the side with the Iranian people and their organized Resistance.

During his address in Baharestan Hall, Secretary Pompeo stated: “I’d also like to recognize President-elect Maryam Rajavi. Under her leadership, the National Council of Resistance of Iran is laying the groundwork for a free, sovereign, and democratic republic of Iran.”

Calling on U.S. officials, Mr. Pompeo went on: “A serious missing factor in U.S. policy towards Iran has been the lack of political support for the organized opposition… Now, to correct the Iran policy, no matter who is in the White House, it is a necessity for the U.S. administration to reach out to the Iranian Resistance and take advantage of its tremendous capabilities.”

Secretary Pompeo’s clear stance echoed that of the NCRI: “Ebrahim Raisi, the butcher who orchestrated the 1988 massacre, is now President… The [election] turnout was the lowest since 1979, marking a total rejection of the regime and its candidate. It was, in fact, a boycott of the regime – and the regime knows it. The regime is clearly at its weakest point in decades…

“Raisi has already failed. He has failed to crush uprisings in Iran or break the noble spirit of dissent within the Iran people,” Mr. Pompeo added. “We must continue to support the Iranian people as they fight for a freer and more democratic Iran in any way we can.”

Secretary Pompeo concluded on a hopeful note, endorsing the goals of the NCRI:  “In the end, the Iranian people will have a secular, democratic, non-nuclear Republic. I am committed to this cause; I know you all are too.”

Following Mr. Pompeo’s speech, Mrs. Rajavi expressed gratitude to the former Secretary of State and highlighted how determined the Iranian people are to end the decades of theocratic rule by the dictatorial regime. The NCRI President-elect explained that “There are two significant factors to the conflict in today’s Iran: On the one hand, we see the regime at its weakest point. On the other, we see the people’s maximum anger and discontent. The outcome of these factors has been the progress and expansion of the organized Resistance.”

Noting that “We have always declared that appeasement and giving concessions will not contain the regime or change its behavior,” she said, “The West has failed to take into consideration the factor of the Iranian people and Resistance. Ignoring this factor is the missing part of the policy that caught the West by surprise during the 1979 Revolution, which toppled the Shah. The Shah resorted to mass killings and curfews in the final months of his rule, but it proved to be counterproductive. Likewise, Khamenei appointed an executioner implicated in the massacre of political prisoners as the regime’s president, to close ranks in the face of the uprisings and save his regime. After one year, one can surely say that Khamenei’s dream did not come true.”

Mrs. Rajavi concluded by summarizing the core components of an effective Iran policy, saying, “Today, we warn again that one should not delay. We say that we can and must free Iran, the Middle East, and the world of the evil of the nuclear mullahs. First, by imposing comprehensive sanctions and international isolation of the religious dictatorship. The mullahs’ regime should be placed under Article 41 of Chapter 7 of the UN Charter.

“Second, by referring the dossier of human rights abuses in Iran and the clerical regime’s terrorism to the UN Security Council, particularly the files on the massacre of 30,000 political prisoners in 1988 and the killing of 1,500 during the November 2019 uprising.