Paris, France – Former US ambassador Adam Ereli made waves this Friday when he claimed that the European Union’s ambassador to Iraq, Ramon Blecau is an Iranian spy.

“The EU’s ambassador to Iraq is an Iranian intelligence agent and Federica Mogherini [the High Representative of EU foreign affairs] knows it” the former ambassador to Bahrain said. 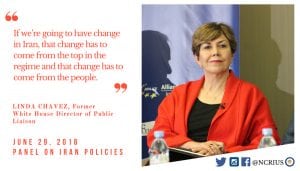 The claim came during an Iranian policy discussion panel hosted by a number of European groups, ahead of the June 30th large scale rally in Paris in support of the Iranian opposition (NCRI). The panel included foreign policy experts like former Italian Minister  and Ambassador to the UN Giulio Terzi, Linda Chavez, former Director of the White House public liaison; Ambassador Adam Ereli, former spokesperson of the US Department of State and ambassador to Bahrain; Robert Torricelli, former US senator and congressman; and Paulo Casaca, a former member of the European Parliament; and Maria Ryan, PhD, CEO of Cottage Hospital. Lincoln Bloomfield, former Assistant Secretary of State for Military Affairs moderated the event and provided his own insight into the challenges and triumphs of the movement to confront the Iranian regime.

The panel centered its focus on the economic pathway of reforming or replacing the Iranian regime. The prevailing belief being that a land with a surplus of natural resources and a population of over 80 million could become an economic powerhouse.

“If it were functioning normally with a normal economy, normal leadership… Iran would be a regional and international economic power,” Torricelli said.

Iran, however, is unable to reach its economic prosperity due to the IRGC and the ruling regime’s meddling in economic affairs, according to the panel consensus.

“Iran has great economic potential if they were to get rid of their clerics,” Casaca said. 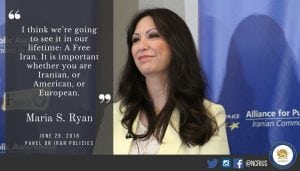 Following this discussion, the panelists turned their attention to Iranian university graduates.

“There are 1.5 million students a year that graduate from Iranian universities… that’s a revolution right there,” Ereli said. ,

The meeting concluded with Torricelli’s reaffirmed call to action.

“We have a brief and probably fleeting moment in history where the democratic nations are as close to military hegemony as we will ever get… that may not last… If we are going to deal with the mullahs and outlaw regimes like it, we can only act now.”