MENUMENU
BIH Series > A Week of Uprisings in Khuzestan

A Week of Uprisings in Khuzestan 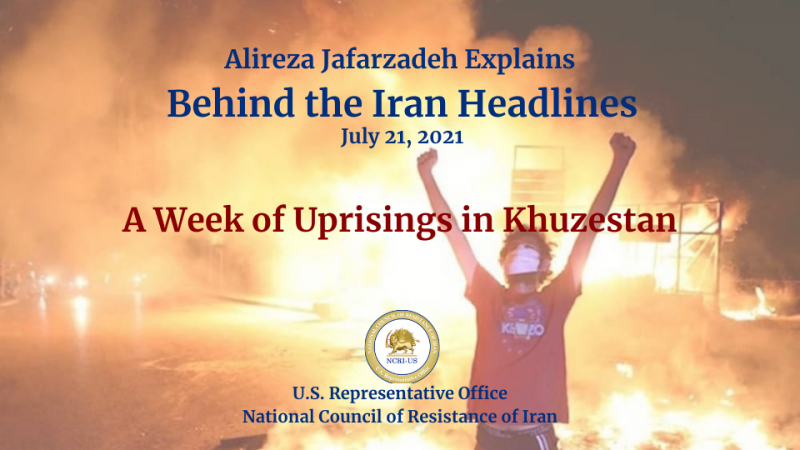 Alireza Jafarzadeh, NCRI-US Deputy Director: Since July 15, 2021, defiant youths in many cities in southwestern province of Khuzestan have staged large-scale protests over the severe shortages of water caused by criminal negligence and corruption of the Islamic Revolutionary Guard Corps, also known as the IRGC.

Khuzestan is a very important province, very rich in resources, including oil, has key ports in the Persian Gulf, is the fifth most populated province with nearly 5 million population, and provides 15% of the GDP, second only after Tehran.

Yet, instead of fulfilling their demands and providing water, the regime resorted to violence by beating the protesters, firing tear gas and then directly shooting at the demonstrators with live ammunition, killing at least five innocent civilians in the province and injuring dozens more.

Many neighborhoods in major city of Ahvaz, as well as Susangerd, Hoveyzeh, Mahshahr, Khorramshahr, Andimeshk, Dezful, Shush, Behbahan, Darkhovin, and Izeh have been the scenes of these escalating protests where people have been chanting slogans such as, “We will not accept humiliation,” “Death to Khamenei, death to the dictator.”

Hundreds of well-equipped repressive forces from Lorestan, Isfahan, and Tehran, including several IRGC commanders, have been dispatched to Khuzestan; all have failed to stop the defiant youth and quell the expanding protests.

Also, on the 6th day of Khuzestan protests, a large group of people, led by courageous female protesters in Tehran’s Sadeqiyeh subway station, chanted “death to the dictator,” and “down with the principle of the velayat-e faqih,” as we witnessed similar protests in the city of Karaj, near the Capital.

Mrs. Maryam Rajavi, the President-elect of the National Council of Resistance of Iran (NCRI), saluted the protesting people of Khuzestan and the people of Tehran, and emphasized that freedom and justice are possible only with the overthrow of this regime and the establishment of democracy and national sovereignty.