Who Is Mohammad Reza Fallahzadeh, the New Deputy Commander of Iran’s Quds Force? 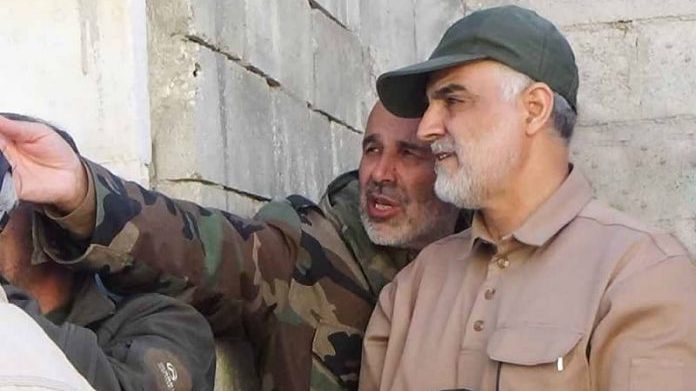 On April 18, the Islamic Revolutionary Guard Corps issued a vague statement announcing that the deputy head of the organization’s foreign special operations division, the Quds Force, had died. The statement said only that Brigadier General Mohammad Hosseinzadeh Hejazi had succumbed to “heart disease,” but the lack of detail quickly raised doubts about the accuracy of its claim. These doubts were soon fueled by the circulation of a message posted to Twitter by the son of another killed IRGC commander.

“I just want to say that the cause of death was not a heart condition. My leader, this soldier of yours [was] sacrificed for you,” wrote Muhammad Mehdi Hemmat. “I offer my condolences, I also sacrifice myself for you.”

Hemmat offered no further insight into the actual cause of death, but it stands to reason that if the IRGC and the Iranian regime at large are lying about it, they are doing so in order to cover up information that would be embarrassing or otherwise damaging to the Iranian regime.

Hejazi played a major role in the regime’s malign foreign activities both before and after assuming deputy leadership of the organization. As the commander of an IRGC-run civilian paramilitary, the Basij, from 1998 to 2007, Hejazi also contributed to major crackdowns on dissent inside Iran. In 2008 and 2009, he served as the deputy head of the IRGC itself, and in 2009 he was a leading figure in the suppression of protests.

But it was from 2011 onward that Hejazi really distinguished himself through crimes against civilian populations, as he coordinated assistance to the Assad regime during the Syrian Civil War. His service to the Iranian regime’s project there placed him in a strong position to assume deputy leadership of the Quds Force after Brigadier General Esmail Qaani was promoted out of that position to replace Soleimani.

Whatever the actual cause of Hejazi’s death, there would have been a similar justification for his assassination as there was for Soleimani’s. Their shared malign influence over the region should raise questions about the background of the officer appointed to replace Hejazi. As it happens, Brigadier General Mohammad Reza Fallahzadeh similarly rose to prominence in the Syrian Civil War, where he oversaw various crimes under Soleimani’s command and acquired the nickname Abu Baqir.

Fallahzadeh, 59, began his career as many officials of his generation did, as a participant in the devastating eight-year war with Iraq. He commanded the IRGC’s 33rd Al-Mahdi Division during that conflict, and after it ended in 1988 he proceeded to command the 19th Fajr Division. From there, he successively took command of IRGC forces overseeing three Iranian provinces: Yazd, Isfahan, and Fars, as well as IRGC’s Karbala Camp.

After serving as governor of Yazd province from 2007 to 2013, Fallahzadeh began leading Quds Force operations in Syria and was eventually named Deputy Coordinator. His time in Syria was marked by human rights abuses, many of which he freely admitted in comments to fellow Iranian officials or state media.

What follows are excerpts of an interview that Fallahzadeh gave to Fars News Agency in June 2020, at which point the regime’s Supreme Leader Ali Khamenei and the entire Iranian regime were still claiming that their intervention in Syria was limited to advising and defending Shiite holy shrines. Fallazadeh’s statements acknowledge widespread paramilitary involvement, taking place amidst countless well-supported allegations that many Syrian civilians were being massacred in Syria.

“The Supreme Leader of the Revolution said, ‘Go and help the Syrian government not to collapse…

Hezbollah and Hazrat Zainab’s camp in the south had gone to the aid of the army. From the first day of Eid until about September 1, 2015, we had continuous fighting and operations in the area around Idlib. The forces of Soheil Hassan and our units, Mohajer and Hezbollah from the beginning of 2015 to the end of August in the region of Idlib and south of Idlib from Mustuma, Jericho, and Jasr al-Shughur and the whole of Sahl al-Ghab were engaged in hard and sometimes hand-to-hand fighting…

“This Nasr and Muharram operation began under the direct command of Haj Qasim [Soleimani] and with the Razavi forces, the People’s Defense and Hezbollah, as well as the Fatimids, Zainab, and Haidarion, and with the help of the army. With the efforts of all the Mujahideen of the army, Hezbollah, the Fatemion, Zainabion, and the Syrian army, and with Russian air support, the enemy was defeated.

“… Our field commanders, Razaviun and Hezbollah, boarded a helicopter with Haj Qasim from Tadmor and landed in the north of Okashat near Tal Banyeh. Abu Mahdi al-Mohandes and the commanders of the Iraqi popular mobilization were present.

“At the same time, the Hezbollah and Muhajireen units advanced 30 kilometers in one day and reached near Albukmal, liberating a number of villages on the outskirts of Albokmal, and this operation continued until November 30.

Fallahzadeh was the IRGC’s second-in-command in Syria, and some reports indicate he was the main commander at the battle of Aleppo, which effectively destroyed Syria’s second-largest city.

During the “Astana talks” in Kazakhstan, he sat alongside Hossein Jaberi Asari, the senior assistant to Iran’s foreign minister and the official representative of the Iranian government in discussions concerning Syria’s future. Fallahzadeh himself was introduced to the talks as an advisor to the foreign minister, even though he held no position in the Ministry and was representing paramilitary interests under false pretenses.