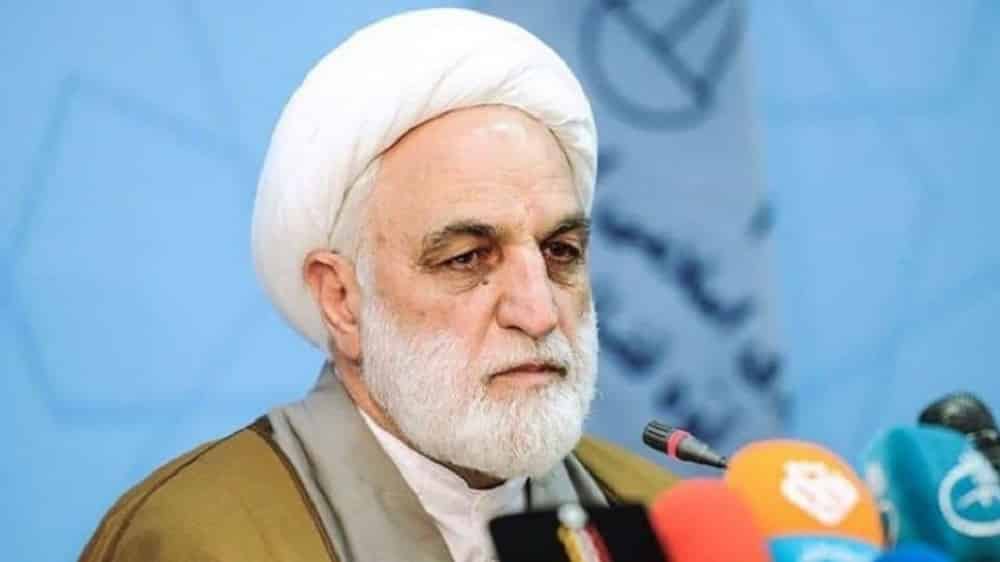 Ejei is one of the most vicious figures of the mullahs’ regime and is sanctioned by the European Union and the United States for his role in oppressing the Iranian people. With Raisi as president and Ejei as the Judiciary Chief, Khamenei confirmed his decision to pursue his policy to consolidate his regime in the face of a restive society and increase oppression to control this explosive society.

In this article, we intend to take a look at Ejei’s background.

Get to know Gholam-Hossein Mohseni-Ejei

Mohseni-Ejei was born in Ezhiyeh, Isfahan, Iran in 1956. He is a graduate of the Haqqani school in Qom, where most of the regime’s top officials and clerics had studied.

Ejei became close to the regime’s founder, Ruhollah Khomeini, and his ilk before the 1979 revolution through the would-be regime’s officials in Haqqani school.

Due to his cruelty, Ejei soon reached top positions in the regime and has been involved in human rights violations for years.

During the 1980s, Ejei held various positions, such as the Representative of the Revolutionary Prosecutor in the regime’s Ministry of Intelligence and Security (MOIS) and the Chief of the Revolutionary Court’s 3rd Circuit. He was the head of the MOIS Select Committee from 1984 to 1985.

Ejei became the Representative of the Head of Judiciary to MOIS in 1986 and remained in this position until 1988.

The Representative of the MOIS had a definitive role in all death commissions and pushed the commissions to increase the number of executions. In effect, they were the eyes, ears, and arms of the henchman. As Montazeri has said: “He [Khomeini] would receive various reports from Intelligence Ministry officials … he would treat these reports as divine truth.”

The memoirs of then-intelligence minister Mohammadi Reyshahri include several letters exchanged between him and Khomeini, verifying that Khomeini directly led the ministry to carry out the crimes. In his book, Reyshahri also confesses to the suppression of Montazeri’s inner circle, saying: “We referred to him even for the smallest matters.”

In the 1990s, Ejei also played a significant role in the so-called “chain killings” of Iranian intellectuals and writers. He was subsequently appointed as the intelligence minister (2005-2009) and the prosecutor general (2009-2014).

As the Minister of Intelligence, Ejei was one of the highest-ranking officials in the mullahs’ regime responsible for executions, killings, and torture in the country. During this period, a large number of prisoners were executed in the regime’s many torture chambers and prisons.

Before becoming the regime’s Judiciary Chief, he was the first deputy of the Judiciary and a member of the Expediency Council.

In a press conference in Tehran on Tuesday, June 18, 2019, Ejei, then the regime’s First Deputy Judiciary Chief, announced that Khamenei had increased the level of authority he enjoys, permitting him to now hand down death sentences.

Based on articles 477 and 350 of the Iranian regime’s penal code, the Supreme Leader has authorized the Judiciary Chief to issue sentences of death and ‘Qisas’ (retribution) under the regime’s so-called Sharia law, to punish criminals with the same crime they have committed. Ejei said that the First Deputy Judiciary Chief has the same authority from now on and can decide over death and Qisas sentences.

Within the last two-and-a-half months, these changes facilitated the conclusion of more than 600 cases of Qisas and execution, he said, the state-run ISNA news agency reported.

Yet Ejei did not say how he concluded the cases – whether he confirmed all the death and Qisas sentence or not. He called this action a “revolutionary Jihadi act” by Judiciary Chief Ebrahim Raisi.

On April 13, 2011, the European Union imposed sanctions on 32 Iranian officials, including Ejei, and banned them from entering EU countries for grave violation of human rights.

On September 29, 2010, the US Treasury Department imposed sanctions on Ejei for committing serious human rights violations, and the statement from the Department pointed to his involvement in “the suppression of protests after the 2009 elections”. And under these sanctions, it was decided to seize Gholamhossein Mohseni Ejei’s potential assets in the United States and ban him from entering the country so that American citizens could not do business with him as well.

The regime’s new president, Ebrahim Raisi, is one of the main culprits of the 1988 massacre of 30,000 political prisoners. With Ejei as the judiciary chief, the regime has confirmed its decision to increase human rights violations.

Both Raisi and Ejei are under sanctions for their role in human rights violations. The emergence of these criminals as the regime’s top officials is part of the systematic impunity they enjoy in Iran. Sadly, the international community’s inaction has rendered this systematic impunity. The international community should hold the regime officials, mainly Raisi and Ejei, accountable for their dark record of human rights abuses.

Holding these criminals to account would be to the benefit of the Iranian people and Iran’s general human rights situation.