The Iranian Regime Conceals its Brutality to Conceal its Vulnerability 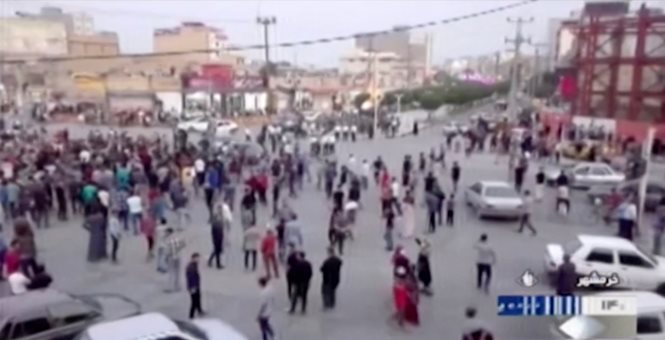 As we witnessed a new round of nationwide protests in Iran, there is no sign of a slowdown in either the people’s unrest or the government’s brutal attempts at repression. By most estimates, the death toll exceeded 200. Thousands more have been wounded and arrested, and details about the regime’s tactics have begun leaking out in spite of the mullahs’ efforts to block the internet and maintain a veil of silence over ongoing developments.

There are two distinct reasons for this silence. Obviously, Tehran does not relish the prospect of the international community becoming widely aware of escalating human rights abuses. Although the regime has historically suffered few real consequences for its past crimes against humanity, each instance of legitimate criticism is grounds for further diplomatic isolation. And at a time when the Islamic Republic is already suffering the effects of the US-led strategy of “maximum pressure,” even the slightest increase in that isolation could dramatically exacerbate the regime’s vulnerability.

That vulnerability is the other reason why Tehran is clearly desperate to conceal the reality of what is going on inside the country. For the better part of four decades, the theocratic dictatorship has maintained its power and its international status by convincing the world that Iran, although poorly governed, is fundamentally stable. Iranian state propaganda has long focused on spreading the message that there is no viable alternative to the existing regime and that there is little organization behind domestic dissent.

The current unrest contradicts this propaganda, and it does so even more conclusively than previous protest movements. The death toll from the latest demonstrations is tragic, but it comes as little surprise. When nationwide protests erupted at the end of 2017, Iranian security forces responded with a crackdown that left several dozen people dead by the end of January 2018.

This time, within hours of the regime announcing a painful hike in the price of gas, people had taken to the streets en masse in Tehran and all other major cities. Contrary to the previous uprising, there was no lead time between the outbreak of protests and the advent of public calls for regime change. Familiar anti-government slogans were revived immediately, and before the first day’s demonstrations were over, people were setting fire to government buildings in response to the crackdown.

The ensuing clashes between the Iranian people and government authorities suggest that the unrest is more than mere activism. It can be credibly characterized as a precursor to a new revolution. Such spontaneous outpourings of anti-government sentiment do not emerge from disorganized movements. They do not proceed in the face of a week’s worth of brutal repression if there is not viable force to back up the demonstrations.

Iranian officials, including Supreme Leader Ali Khamenei, have all but admitted to these facts. The organized nature of the protest movement was already difficult to deny at the beginning of last year, when Khamenei acknowledged that the leading Iranian resistance movement, the People’s Mojahedin Organization of Iran (MEK), had played a prominent role in organizing the demonstrations and facilitating the chants of “death to the dictator” and “death to [President] Rouhani.” Unsurprisingly, the Supreme Leader named the MEK again when he sought to explain the extraordinary public reaction to last week’s price hikes.

These statements notably fly in the face of the regime’s longstanding efforts to downplay the threat posed by the MEK. Traditionally, that organization has been described in state propaganda as lacking in public support, so as to justify the claim that the clerical regime is the only guarantor of Iran’s stability.

Today, though, it appears as if these tactics of concealment have reached the limits of their practicality. Despite hundreds of deaths, the Iranian public appears unwilling to relent in it calls for regime change. And the country’s democratic Resistance movement, as led by the MEK, appears unwilling to retreat. The country is staring down the barrel of a new revolution, and now the other nations of the world must ask themselves what role they wish to play.

At no point has the Iranian opposition asked for direct assistance from Western powers or other would-be allies. But this is not to say that the world should remain neutral. In fact, any attempt to do so could amount to siding with the regime against the Iranian people. Anything less than total diplomatic isolation would essentially give Tehran a green light for even worse human rights violations than it has already perpetrated against pro-democracy activists. The world can keep an appropriate distance from Iranian affairs while also making it clear that such crimes are not acceptable. This is particularly true for the European Union that is based on and cherishes the rule of law and respect of human rights.

This is exactly what Maryam Rajavi, the president-elect of the National Council of Resistance of Iran recommended in a statement as soon as the severity of the regime’s repression became apparent. Specifically, she urged the United Nations Security Council to convene an extraordinary session in response to the unrest, and to formally condemn Iran’s leaders for crimes against humanity.

When steps have been taken to hold the regime to account, its desperate tactics for concealing dissent will begin to unravel. And then, even without assistance from the outside world, Iran’s entire population of 80 million people will see that their suffering has not been in vain, and that democracy and freedom are well within their grasp.