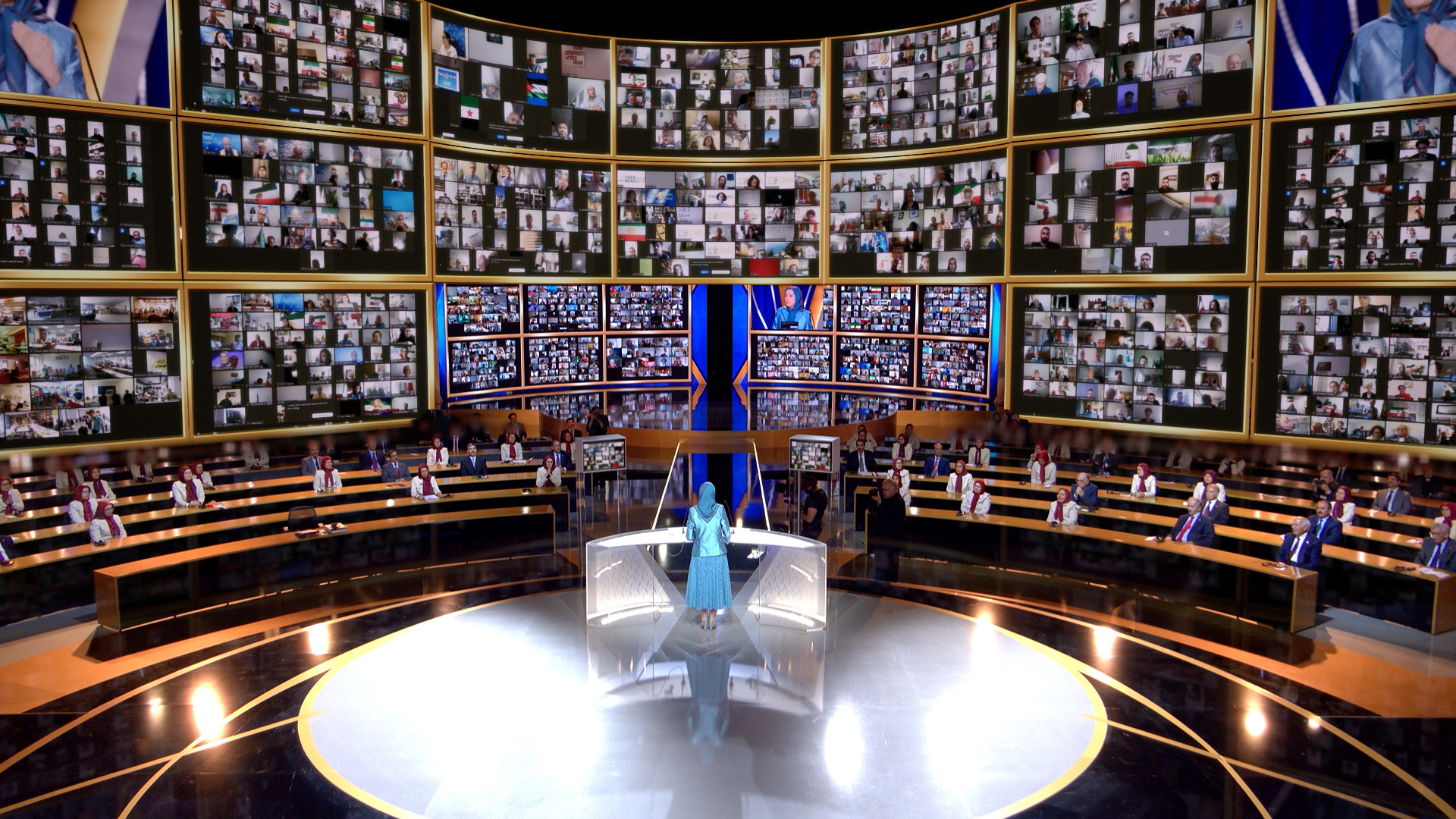 Rudy Giuliani, former Sen. Joe Lieberman, and a slate of other prominent U.S. figures joined thousands of dissidents at a virtual summit calling for regime change in Iran.

The Friday event marked the annual gathering of the National Council of Resistance of Iran, a leading opposition group that works to topple the government of Iran. Usually, the gatherings are held in Europe and bring together dozens of speakers and thousands of attendees, but this year, because of the coronavirus pandemic, it was held online through the popular communication platform Zoom.

Giuliani, President Trump’s personal lawyer, Lieberman, a former senator from Connecticut, and former Democratic Sen. Robert Torricelli of New Jersey, all appeared side by side to address the large gathering, which organizers said included viewers from more than 100 countries. The three men have a history of advocating for the NCRI, which is an umbrella organization for the People’s Mujahedin of Iran, or Mojahedin-e Khalq, or MEK. The names are frequently used interchangeably to refer to the Albania-based organization.

The group is led by the 66-year-old Maryam Rajavi along with her husband, 71-year-old Massoud Rajavi. Despite officially being one of the leaders of the organization, Massoud has not been seen publicly since his disappearance in 2003.

Maryam Rajavi addressed the virtual crowd and called for an end to Ayatollah Ali Khamenei’s regime. She hailed the organization of her group and also expressed solidarity for protesters and dissidents working within Iran, who have been subject to imprisonment or worse.

“This summit echoes the voice of the Iranian people’s 40-year resistance against religious dictatorship and fascism and for freedom and democracy. This is the voice of the largest, the longest-standing, most sophisticated, and most serious organized resistance in Iran’s history,” Rajavi said, emphasizing that the first commitment of the NCRI is the overthrowing of Iran’s current government.

Rajavi said that hundreds of locations across Iran had protests during last November’s mass demonstrations and called those protests “a brilliant model for the great uprising” that she expects to come eventually to the country of 81 million.

During her speech, Rajavi also held a moment of silence for the thousands of Iranians who have died since the start of the coronavirus pandemic, which has ravaged the country and its healthcare infrastructure. Official figures count some 270,000 infections and at least 13,700 deaths, although the resistance group claims that the government is covering up the true numbers, alleging that the actual death toll has exceeded 70,000.

During the opening of Giuliani’s speech to the NCRI gathering, he highlighted the sheer scale of the online event. Lieberman also mused at the size and told the audience that the number of people tuned into Zoom might break a record for most people attending one Zoom event. The Washington Examiner reached out to Zoom about this claim but did not immediately receive a response. Organizers said that the event was being streamed on Zoom from some 30,000 locations.

“Most importantly, it’s broadcast live in Iran … This gathering is for them,” Giuliani said. At one point during the event, the NCRI aired recorded videos from dissidents in all of Iran’s 31 provinces. The videos featured people with their faces obscured to protect their identities, some holding up signs, calling for an end to Tehran’s theocratic rule.

After the event, the Washington Examiner asked Giuliani about how much engagement he has had with Trump about the Iranian opposition group and potential regime change. Giuliani said he couldn’t discuss his conversations with Trump as his lawyer or in his capacity as the president’s adviser and friend, but he did point out the differences between Trump administration policy toward Iran and former President Barack Obama’s administration.

“The president of the United States is the first president who dramatically stood with the protesters,” Giuliani said. The former New York mayor said that Trump’s statements in support of the protesters gave their cause “a lot of impetus and strength.”

The Trump administration has taken a strong stance against Iran since withdrawing from the Iran nuclear deal. Iran and the U.S. signed a deal in 2015, along with Germany, France, Britain, China, and Russia, but Trump unilaterally withdrew the U.S. from the pact in 2018 and started a “maximum pressure” campaign aimed at squeezing the Iranian economy. Since then, Iran has increasingly violated the initial strictures of the deal.

Tensions soared In January when the U.S. carried out a drone strike that killed Iranian military commander Qassem Soleimani. Iran responded to the death by firing a barrage of missiles at Iraqi bases housing U.S. troops. On the same night it fired the volley of missiles, Iran also accidentally shot down a Ukrainian passenger airliner, killing all 176 onboard and sparking renewed domestic protests.

Giuliani lauded Iranians who have taken to the streets to protest against the regime. He read some of the slogans on signs seen during the demonstrations, adding, “It’s one thing for me to say that, and to hold that sign, here in America, or in the United Kingdom, or in France, or in Germany. It’s another thing to hold that sign in Tehran. That’s a mark of death.”

Hiva Feizi, senior adviser to the International Convention for the Future of Iran, told the Washington Examiner on Friday that the event comes at a turbulent time for Iran’s ruling regime. She said that a combination of elements are driving discontent within Iran.

“The regime is in its weakest state since its inception. The sanctions have broken its economy. The national currency is in free fall,” Feizi said, also noting middle-class discontent, the January downing of a Ukrainian airliner ( which Tehran claims was an accident), and popular opposition to planned executions of protesters.

“So the regime is waiting for the next mass protests, which are inevitable,” she said.

Torricelli was another speaker at the event. He was first elected to the House in 1983 and later served in the Senate from 1997 to 2003. In addition to his speech, Torricelli also held a question-and-answer session with reporters after he addressed the group.

“The MEK in a matter of years has gone from the terrorist list in the United States State Department to what I consider to be a collaborative relationship with the Trump administration,” Torricelli said.

Although lauded by many U.S. lawmakers and policy figures, the MEK has a controversial past and was considered by the U.S. to be a terrorist organization from 1997 until Secretary of State Hillary Clinton removed the group from the list in 2012.

Torricelli said that he never thought the group should have been listed as a terrorist organization. “Having been removed from the list, I consider the MEK, in my opinion, to now be a resource for the U.S. government,” Torricelli said.

The former senator also said there was sweeping support for the resistance group in the halls of Congress, a matter he bemoaned was not frequently reported on in the media.

“I have served in the United States Congress for 20 years, I have rarely ever seen an issue that has such broad support as support for the MEK and opposition to the mullahs in Iran,” Torricelli said.

The remarks come after a majority of the House, including both Democrats and Republicans, pushed for a resolution that condemns Iran for its activities in Europe, specifically for alleged foiled attacks against the NCRI. The lawmakers who signed onto the resolution were ideologically diverse, and a recent event touting the resolution included speeches of support from both sides of the aisle, including from Democratic Rep. Sheila Jackson Lee of Texas and Republican Rep. Tom McClintock of California, the legislation’s sponsor.

Another fervent and reliable supporter of the NCRI is Lieberman, who told the crowd of Iranian dissidents that “your values are American values” and “your interests are American interests.”

He said that support for Iranian opposition is not only morally just but is in the national security interests of the U.S. The former senator, who was Al Gore’s running mate in the 2000 presidential election, asserted that the Iranian regime is weakening under U.S. economic pressure and sanctions. He also pushed back on those in the U.S. who favor sitting down to negotiate with Khamenei’s government and compared the regime to a “criminal syndicate.”

“Everything that has been tried has not worked. And since the regime in Tehran has proven itself that it will not change, we must together act to change the regime,” Lieberman said, highlighting the dissidents in Iran who have worked to oppose the government. “And when they do change their resistance into rebellion, we and the rest of the world, particularly in the United States, must stand with them and support them.”