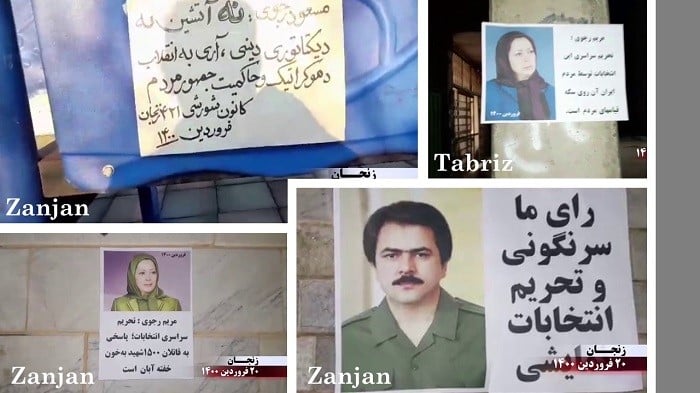 As the Iranian regime’s sham presidential elections draw closer, state-run media acknowledge how people would boycott the regime’s sham elections and warn of its consequences.

“According to political activists, the overall public satisfaction of the country’s situation, officials’ indifferences to people’s demands and other important events, are the most important reasons for the low turnout [in the upcoming sham] elections,” wrote the state-run Arman daily on Tuesday.

The “important events” are the nationwide Iran protests in November 2019, the Covid-19 crisis, and people’s poor economic situation due to the regime’s wrong policies and corruption.

Following the major Iran protests in November 2019, and after the regime massacred over 1500 protesters, Iranian people boycotted the regime’s sham parliamentary elections in February 2020. The state-run media now warn that the upcoming sham presidential elections will have a much less turnout.

“After an unprecedented decrease in the turnout in the 11th parliamentary elections, now on the eve of the 13th presidential election, the people have not shown any desire in participating in the [sham] elections,” Arman daily wrote in another article on Monday.

Arman again underlines that “Many economic, social and political problems, the disorganization of branches, disregard for people’s demands, and the [regime’s] failure to fulfill those demands” are some reasons for people to boycott the regime’s sham presidential elections.

“Millions of youth are unemployed, and millions are addicted, in debt, or struggling with inflation. Why you don’t solve their problems?” Arman’s article adds.

“Some officials only blame the global arrogance or regional countries for problems. They claim they have done everything but couldn’t solve people’s problems. People say how long should we pay the price [of the regime’s wrong policies]?” Arman’s article adds, rejecting claims by the regime and its apologists that sanctions are Iran’s only problem.

Due to the regime’s malign policies and illicit activities, Iran’s economic and social crises have reached an irreversible point. The regime has no solution for these crises.

“The country’s economic problems have become so deep that if all factions unite and move forward with a comprehensive economic plan, they will not succeed in the short term,” wrote the state-run Eghtesad-e Pouya on Monday, adding that people “have concluded that changing the president is not the solution.”

Eghtesad-e Pouya admits that “In recent years, people have become aware of the roots of many of the economic problems,” and are looking for a “comprehensive change” of the situation.

This comprehensive change is regime change in Iran. As Hamid Reza Jalaie-Pour, a senior commander of the Revolutionary Guards (IRGC), on April 16, said: “Our country is filled with dissatisfaction. They should be resolved, if not, they will condense, and there will be consequences for us.”

IAEA Talks with Tehran on Origin of Uranium Traces at Undeclared Locations
Comment
The U.S. Must Stay Firm in Iran Negotiations