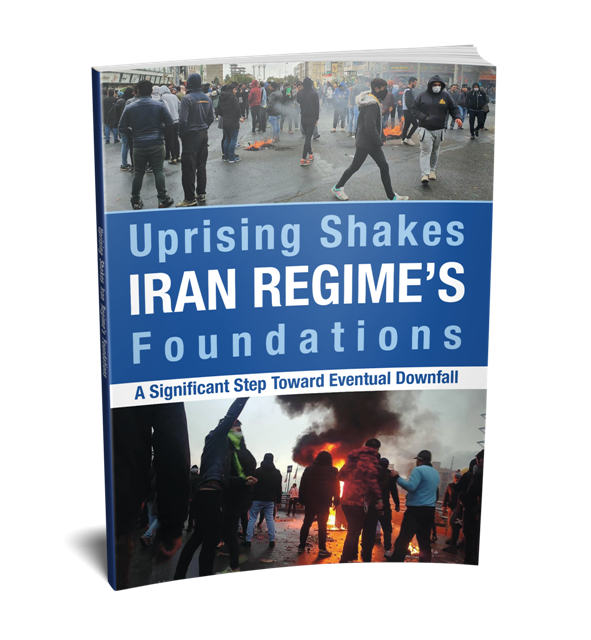 This manuscript examines the nationwide uprising that erupted on November 15, 2019 and spread to over 180 cities in all 31 provinces of Iran. Although the unrest was sparked by a gasoline price hike, by as much as 300 percent, the protests rapidly expanded and changed focus, concentrating on the nature of the regime.

From the first day, the regime resorted to sheer violence and State Security Forces (SSF) declared a state of red alert, whereby the SSF handed over responsibility for suppressing the uprising to the IRGC, and SSF forces were put under IRGC command.

Protesters soon called for regime change by chanting “death to Khamenei,” “death to Rouhani,” and “death to dictatorship” as they confronted the repressive forces. According to the regime’s own officials, dozens of centers of repression such as the Islamic Revolutionary Guard Corps (IRGC), Bassij, and police headquarters were attacked, after the regime started to fire live ammunition at demonstrators.

In addition, over one thousand state-run banks, mostly owned by the regime’s Supreme Leader, Ali Khamenei, and the IRGC, were attacked. Iranians see these financial institutions as plunderers of their wealth and resources, whose main mission is to fund the instruments of repression inside Iran and terrorism abroad. For example, Bank Melli, the largest bank in Iran with over 3,000 branches, and Bank Mellat (owned by Khamenei’s SETAD) with over 1,600 branches, were major targets. Both have already been designated as terrorist entities by the U.S. Treasury. Khamenei, whose representative offices were also attacked by the youth, was himself sanctioned by the Treasury Department.

The regime cut off the internet on the second day to disrupt communications between protesters and prevent reports of the scale and intensity of the uprising, as well as of the atrocities committed by the IRGC and SSF from getting to the outside world. The shutdown lasted for several days before service was partially resumed in some areas.

The Iranian regime confronted the growing protests with bullets, using both snipers and in many cases shooting protesters at point-blank range. It deployed its multitude of repressive agencies and capabilities. Consequently, the latest casualty figures as of the publication of this report exceed 1,500 dead, nearly half of whom have been identified by the Iranian Resistance. Over 4,000 were wounded and at least 12,000 arrested in some 190 towns and cities.

The resistance has also identified 92 of the officials who had leading roles in the violent murder and detention of protesters in the seven provinces which were the scenes of the most significant, widespread, and pervasive protests.

The book also highlights the role of the main Iranian opposition movement, the Mujahedin-e Khalq (MEK) and their Resistance units and councils, as conceded by many major regime officials.

The key characteristics of the nationwide uprising which, by all indications, has shaken the regime to its foundations are:

The Iranian Resistance has called on the international community to take the following measures: