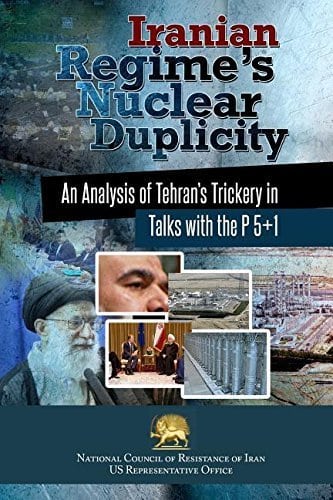 Iranian Regime’s Nuclear Duplicity: An Analysis of Tehran’s Trickery in Talks with the P 5+1

International negotiators have been engaged in talks with the Iranian regime on its nuclear program since 2002. The current approach, led by the United States as part of the so-called P5+1, is now in its final stages.

While opinions may vary as to the contents and wisdom of the deal that may be taking shape, all understand that the success of any agreement will be dependent on whether the Iranian regime can be trusted to curtail its decades-long quest for a nuclear weapon.

As President Obama has suggested, if this agreement results in Iran becoming a nuclear power, history will judge the signatories harshly and it will evaluate whether they acted based upon factual evidence regarding the Iranian regime’s past and current behavior.

This book examines Iran’s behavior throughout the negotiations process in an effort to inform the current dialogue on a potential agreement. Drawing on both publicly available sources and those within Iran, the book focuses on two major periods of intense negotiations with the regime: 2003-2004 and 2013-2015. Based on this evidence, it then extracts the principles and motivations behind Tehran’s approach to negotiations as well as the tactics used to trick its counterparts and reach its objectives.