MENUMENU
Publications > Books > BOOK-IRAN: A Writ of Deception and Cover-up 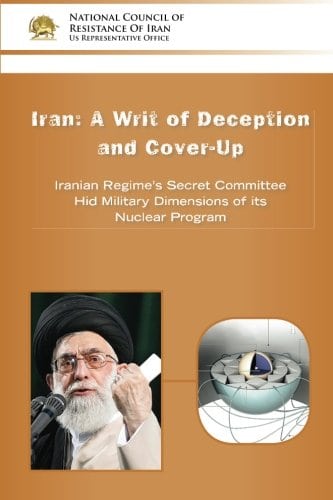 Iran: A Writ of Deception

Based on reliable information obtained by the Mujahedin-e Khalq (MEK) network inside Iran, a top-secret committee is in charge of drafting the answers to the International Atomic Energy Agency (IAEA) regarding the Possible Military Dimensions (PMD) of Tehran’s nuclear program.

Top officials from the Islamic Revolutionary Guards Corps (IRGC) and the Ministry of Defense Armed Forces Logistics (MODAFL) comprise the committee’s key members. They have been tasked with drafting the responses to IAEA’s PMD inquiries working to cover up the military dimensions, thus resolving and terminating the PMD dispute by forging suitable scenarios for non-military usage of the program, which would seem plausible to the IAEA, and to falsely convince the international community that Iran has never been after the nuclear bomb.

This committee prepared the PMD answers delivered to the IAEA on August 15, 2015. Among the foremost issues related to the PMD question are the explosive detonators called EBW (Exploding Bridge Wire) detonator, which is an integral part of a program to develop an implosion type nuclear device.

In its September 2014 report, IAEA stated that Iran has offered “information and explanations to the Agency on Iran’s work after 2007 related to the application of EBW detonators in the oil and gas industry which was not inconsistent with specialized industry practices.” Tehran forged documents and exchanged communication between the Oil Ministry and the Defense Ministry to prove that the EBWs were produced and used by the oil industry.

But according to an exhaustive investigation by the Iranian Resistance involving dozens of sources, the National Iranian Drilling Company (NIDC), which is responsible for all oil and gas drilling, has not received even one of EBW detonators that had been produced by the Ministry of Defense. The information contained in this book renders the regime’s claims utterly false.