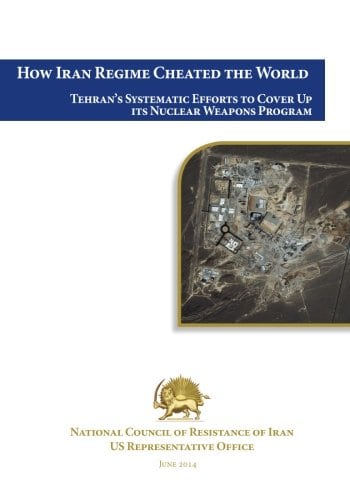 How Iran Regime Cheated the World: Tehran’s Systematic Efforts to Cover Up Its Nuclear Weapons Program

“How Iran Regime Cheated the World” deals with one of the most fundamental challenges that goes to the heart of the dispute regarding the Iranian regime’s controversial nuclear program: to ascertain with certainty that Tehran will not pursue a nuclear bomb. Such an assurance can only be obtained through specific steps taken by Tehran in response to the international community’s concerns.

The monograph discusses the Iranian regime’s report card as far as it relates to being transparent when addressing the international community’s concerns about the true nature and the ultimate purpose of its nuclear program; It relies on credible intelligence and information obtained and collected by sources affiliated with the Iranian opposition group, the Mujahedin-e Khalq (PMOI/MEK).

Despite Tehran’s insistence that it has adequately responded to all the outstanding concerns voiced by the UN nuclear watchdog, the International Atomic Energy Agency (IAEA), an impartial study of Tehran’s tangible actions and corresponding expression of attitude suggests a different account and casts serious doubt on Tehran’s claims of transparency.

This book demonstrates that at every step of the way the regime has concealed the scope of its illicit nuclear activities and often misled the world community, sometimes even taking IAEA inspectors to the wrong locations and facilities.