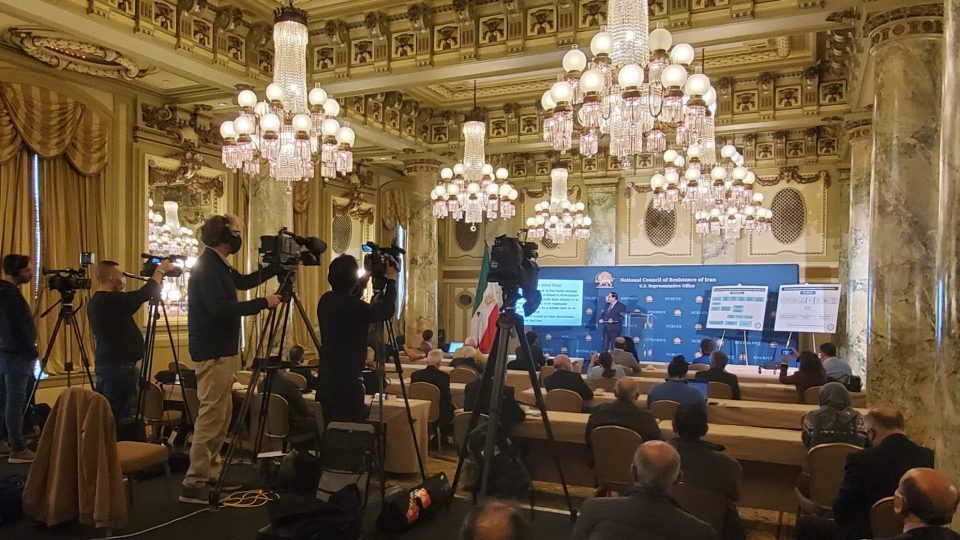 WASHINGTON, DC — February 2, 2022–The Iranian regime’s terrorist Revolutionary Guards (IRGC) Quds Force is recruiting mercenaries for its newly-established terrorist units aiming to launch attacks against ships and other maritime targets in the Middle East, according to information obtained by the network associated to the Iranian opposition People’s Mojahedin Organization of Iran (PMOI/MEK) inside Iran. These new terror cells are fully armed and trained by the IRGC Quds Force, according to the information released during a press conference on Wednesday, February 2, held by the Iranian opposition coalition National Council of Resistance of Iran (NCRI) US Representative Office in Washington, DC.

NCRI’s representative in the United States, Ms. Soona Samsami opened the press conference and provided an overview of the new information, followed by the implications of this information and what the U.S. and the world need to do.

Mr. Alireza Jafarzadeh, the deputy director of the NCRI-US followed by providing details of the NCRI’s revelation using charts, graphs, satellite imagery, and other details about the new game plan of the IRGC-QF and the newly formed naval units consisting of the mercenaries of the Iranian regime, including the Houthis’ Ansarallah from Yemen. Mr. Jafarzadeh responded to questions posed by reporters. The Q&A session is here.

Below is a condensed description of the information provided by the NCRI during the conference in Washington, DC.

The IRGC’s capacity to continue its meddling campaigns in Iraq, Lebanon, and Syria has been declining following the January 2020 elimination of former IRGC Quds Force chief Qassem Soleimani, known as the Iranian regime’s terror mastermind. This strategic blow to Tehran resulted in a weakened Quds Force and a decline in its ability to directly encroach in countries across the Middle East. Desperately needing to compensate for this strategic setback, the IRGC has been ramping up its lethal intervention in Yemen, especially through boosting naval terrorist activities and going as far as using the shores of Yemen to threaten international shipping.

The IRGC Quds Force has established a command headquarters in Yemen busy recruiting forces for the Houthi militias who are sent to Iran to receive training. The Quds Force provides training in specialized naval courses for a long slate of its proxy forces arriving from not only Yemen, but also Iraq, Syria, Lebanon, and African countries. These mercenaries are then dispatched to their home countries to launch naval terror cells and carry out attacks based on orders from the Quds Force.

These proxy naval units receive naval commando training in a location called the Khamenei Academy of Naval Sciences and Technology. This primary site is situated in the city of Ziba Kenar on the coastline of the Caspian Sea in Gilan province, northern Iran. A specific branch of the IRGC’s Ziba Kenar University is dedicated solely to the six-month training course allocated for the regime’s foreign proxy members affiliated to the Quds force. For example, one such course in naval science and technology was launched for around 200 mercenaries from Yemen back in January of 2020, followed by another group of mercenaries from Iraq in July 2020. They were all sent back to their countries to form the naval units and carry out maritime terrorist operations.

Several Persian Gulf islands, including Farur and Qeshm, have been allocated for the IRGC Quds Force to use for their maritime training of these proxy units. The IRGC Navy has established numerous centers in different areas of Qeshm Island, which itself is considered the main training complexes at the Quds Force’s disposal. The island’s underground facilities are also being used by the IRGC to stockpile their various weapons, and most importantly, a cache of missiles. This goes parallel to the IRGC Navy and foreign terrorist forces receiving training in this area.

The Quds Force also has an expansive smuggling network busy providing weapons and equipment to its proxies assigned to carry out naval attacks. One method of delivering weapons to Yemen is through third countries, such as Somalia. Another widely used method involves deploying small boats, known as dhows, trekking the coasts of the Gulf of Oman. Bandar-e-Jask is one of Iran’s most important ports used to transfer the specified cargo on the dhows and send them off to their destinations.

The Houthis in Yemen have received speedboats, missiles, mines, and other weapons from the IRGC Quds Force. Once equipped with such an itinerary, the Houthis employ tactics focusing on utilizing speedboats and asymmetric warfare, very similar to those seen being deployed by the IRGC Navy in the Persian Gulf through which they harass both commercial shipping and even military navies.

All these measures are aimed at expanding conflicts from Iran’s southern shores into the Arabian Sea, across to the strategic Ban al-Mandab Strait, and into the Red Sea. These activities spread through such a vast geographical area allowing Iran’s regime to influence a wide range of measures and issues across this region. This is rendered into the political influence that is extremely important to Tehran.

Most terrorist operations in this sensitive area of the globe that target foreign and Arab ships have been launched by the Quds Force through these proxy naval units. The Iranian regime is thus able to cover its tracks and continue pursuing an agenda in the shadow of the ongoing war in the region that is fueled by the Iran-backed Houthis in Yemen.

From early 2021 onward, and more specifically after August 2021 to this day, meaning after Ebrahim Raisi took office as the Iranian regime’s new president, Tehran has been expanding and escalating its maritime terrorist operations using its foreign proxies, and this especially includes the Houthis in Yemen.

With the Quds Force intensifying its destructive meddling across the region, Tehran has been further deploying unmanned aerial vehicles (UAVs, or drones) and missile attacks. The Iranian regime is escalating its maritime violence to follow suit with its increasing use of drone attacks targeting Persian Gulf countries, especially with a series of recent attacks targeting cities inside the UAE, leading to both UAE and U.S. forces stationed in Abu Dhabi to respond by deploying Patriot air defense missiles. These belligerent measures, of course, go parallel to the regime’s nuclear hostility.

The West’s insistence on continuing their appeasement policy vis-à-vis the Iranian regime and refusing to hold the mullahs accountable for their terrorism, let alone their human rights violations at home, are increasingly emboldening Tehran to expand its rogue behavior across the Middle East and create even more mayhem throughout the region.

Regardless of how Tehran may further pursue its nuclear weapons program and the Vienna negotiations with world powers, the mullahs’ regime needs to be held accountable for their numerous proxy wars in the region, their continued support for terrorism, expansion of ballistic missiles, and the appalling human rights violations and crackdown as more Iranians take to the streets these days to voice their protests. None of these dossiers can be independently pursued by the international community without responding to the regime’s belligerence in its entirety.

The Iranian regime’s updated game plan to further advance their terrorist objectives by prioritizing the recruiting/training/arming/funding of proxy groups, parallel to expanding their regional mayhem, seeks to realize the goal of projecting power and providing necessary cover for the mullahs’ fundamental weakness inside Iran.

From December 2017 onward, Iran has witnessed eight major uprisings, some leading to nationwide movements, in addition to continuous protests by people from all walks of life. The Iranian society, described by experts and academics as a powder keg, is constantly voicing its undeniable desire for fundamental regime change in Iran by the people of Iran.

The mullahs are boosting their support for terrorism in a desperate effort to obtain additional leverage both domestically and internationally. This goes to explain why Tehran is increasing the budget and resources needed to train, fund, and arm its proxy groups while at least 70 percent of the Iranian population is barely making ends meet and living in poverty.

With Raisi taking the helm at the regime’s presidency, any conciliatory and/or appeasement approach adopted by the West would only encourage Tehran to increase its bellicosity. As a result, there should be no discussion of sanctions relief for the regime until they have brought all their rogue behavior both inside the country and abroad to a complete halt.

In fact, the international community should be imposing additional sanctions in response to the Iranian regime’s recent measures to increase violence across the region parallel to escalating crackdown inside the country.

Video footage of the press conference in Washington DC: Ms. Soona Samsami and Mr. Alireza Jafarzadeh disclose the details about the Iranian regime and its IRGC and Quds Force naval terror structure.