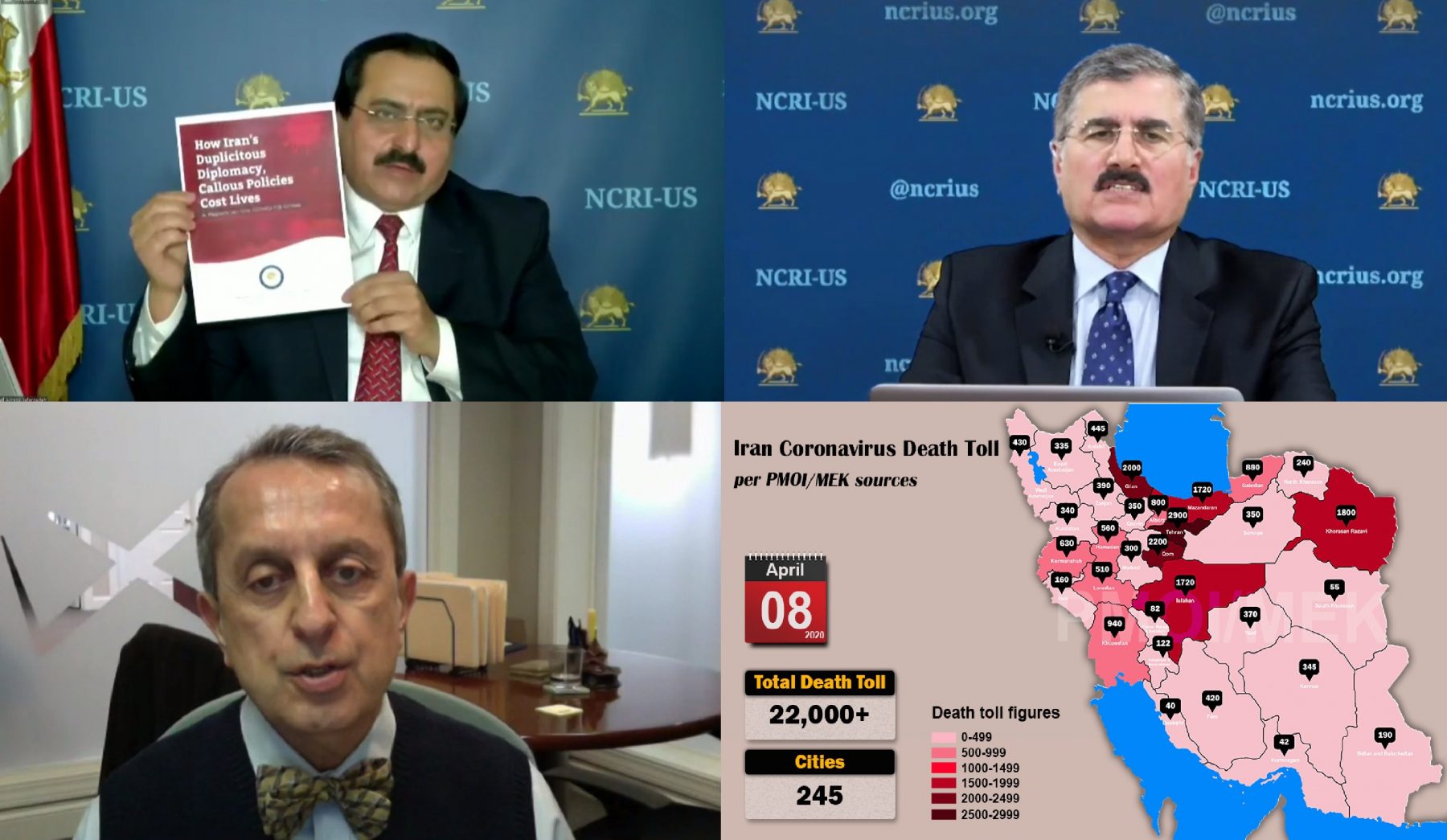 WASHINGTON, DC, April 8, 2020 — In a press briefing, entitled, “Iran COVID-19 Crisis: Sanctions and Tehran’s Response to the Pandemic,” officials of Iran’s democratic opposition coalition and a medical expert addressed the depraved incompetence, cover-up and negligence of the Iranian regime in dealing with the coronavirus pandemic. The disease has spread to all of Iran’s 31 provinces and caused the death of over 22,000 Iranians in 246 towns and cities.

A new 84-page report, prepared by the U.S. Representative Office of the National Council of Resistance of Iran (NCRI-US), entitled, “How Iran’s Duplicitous Diplomacy, Callous Policies Cost Lives,” was released.

Pointing out that Iran has been an epicenter of coronavirus and the worst hit country in the Middle East, Jafarzadeh said, “Coronavirus entered Iran directly from China and spread to three cities in Iran. In addition to Qom, where hundreds of Chinese clerics – some of whom were infected – are trained, the virus broke out in Gilan Province. Tourists had gone from China to the Republic of Azerbaijan, and from there through the Astara border to Bandar Anzali in Gilan in January 2020. The first cases of corona patients were observed in Gilan in late January. Direct flights of Mahan Air from four Chinese cities to Tehran were the route by which the virus infected the residents of the capital.”

In lieu of spending vast sums on the IRGC’s Quds Force or its terrorist proxies outside Iran, the regime must be forced to allocate the nation’s wealth to the task of confronting the coronavirus.

Jafarzadeh provided a detailed review of some of the key financial entities under the control of the regime’s Supreme leader, Ali Khamenei, and the Islamic Revolutionary Guard Corps (IRGC). He showed how hundreds of billions of dollars of the Iranian people’s national wealth are under the control of Khamenei; even a small percentage of this wealth, if spent on fighting the coronavirus pandemic, could address all of the logistical, resourcing, and healthcare requirements.

Jafarzadeh emphasized the mullahs must be compelled to allow international organizations into Iran to provide direct help. In lieu of spending vast sums on the IRGC’s Quds Force or its terrorist proxies outside Iran, the regime must be forced to allocate the nation’s wealth to the task of confronting the coronavirus. He stressed the mullahs do have the necessary means and resources to combat the epidemic, but refrain from using them for the health and welfare of the Iranian people.

Many bipartisan members of the U S Congress argue that there is no justification for lifting or easing sanctions, when the regime continues its support for terrorism, its missile and nuclear programs, and human rights violations at home.

In his remarks, Prof. Firouz Daneshgari said, “Iranian physicians and medical staff are compensating for the regime’s failure to deal with the crisis by putting their lives on the line. There is no question that the regime’s approach in dealing with this crisis has been nothing but deception, lies and a lack of support for the Iranian people. And when it comes to providing medical equipment, medicines and other needs of the patients, a French Foreign Ministry official has stated that the majority of the aid provided by the French to the regime, worth about four billion dollars, had been transferred to Iraq and Lebanon by the Iranian authorities.”

He pointed out that while the rest of the world was fighting the coronavirus with social distancing, quarantine, and by providing services and resources to the needy so that they can stay home and save lives, the Iranian regime was doing the exact opposite. Rather than allocating the vast sums available to it to fund the fight against the crisis, it continues to fund terror groups in the region, escalating the threats against the Americans in Iraq and elsewhere.

Dr. Daneshgari also spoke about an initiative by more than 150 Iranian-American physicians, who have written a joint letter to President Trump, arguing, “the Iranian regime is waging a campaign, not to help the people of Iran, but to exploit the loss of thousands of Iranian lives due to COVID-19 for its sinister agenda, to get the sanctions lifted by the United States and the international community.” The joint letter added, “We believe the much-needed humanitarian aid should only be provided directly to the people of Iran, and not the regime and its IRGC, and Tehran must be compelled to accept such humanitarian aid.”

In his remarks, Ali Safavi said, “There is reliable evidence that the regime knew about the spread as early as late January, and most likely earlier, but did not inform the public or the world about it. In fact, Hassan Rouhani insisted that they learned about the spread of the virus to Iran on February 19. In other words, the regime waited at least three weeks before informing the Iranian public and the world. It did so in order to ensure a high turnout for the revolution’s anniversary march on February 11 and the sham parliamentary elections on February 21. The IRGC-controlled Mahan Air continued passenger flights to and from China well into March. There are several hundred Chinese clerics who study in Qom, where the virus was first detected, and from where it spread to other Iranian provinces.”

Safavi continued, “The Iranian regime pursues a two-pronged strategy in dealing with the coronavirus crisis. At home, it tries to cover up the number of fatalities and its failure, prompted by political and economic considerations, to adopt the measures needed to prevent the spread of the virus At the international level, its talking heads, lobbyists and appeasement advocates claim that the sanctions are hampering its efforts to effectively manage the crisis The mullahs’ duplicity and attempts to conceal their ulterior motives and incompetence, are undermined by the facts on the ground, which demonstrate that the regime, and only the regime, is responsible for the disastrous spread of the epidemic, resulting in the shocking death toll.”

“As a state policy, the regime seeks to exploit the coronavirus and the loss of life to boost its own status by getting the sanctions lifted without abandoning the rogue behavior which caused the imposition of sanctions in the first place. Tehran is looking for cash to fund its terror operations in the region, while it rejects humanitarian and medical assistance by other nations, including the United States, as well as internationally recognized non-governmental organizations,” the report said.

The report described how the Iranian Foreign Ministry’s campaign to lift sanctions is replete with lies and misleading claims, with the goal of cynically exploiting the coronavirus pandemic to the regime’s benefit. In effect, the mullahs are causing the death of thousands of Iranians to preserve their own rule. The correct policy is not to give in to this campaign, but rather to pressure the regime to free up the available resources that belong to the Iranian people and are urgently needed to combat the human tragedy unfolding in Iran—a tragedy aggravated by regime corruption and mismanagement. If other countries and international organizations want to assist the Iranian people, they should not provide resources to the regime; rather, they should dedicate their assistance to the World Health Organization, which can then release it directly to the oppressed people of Iran.

National Council of Resistance of Iran – US Rep.Office