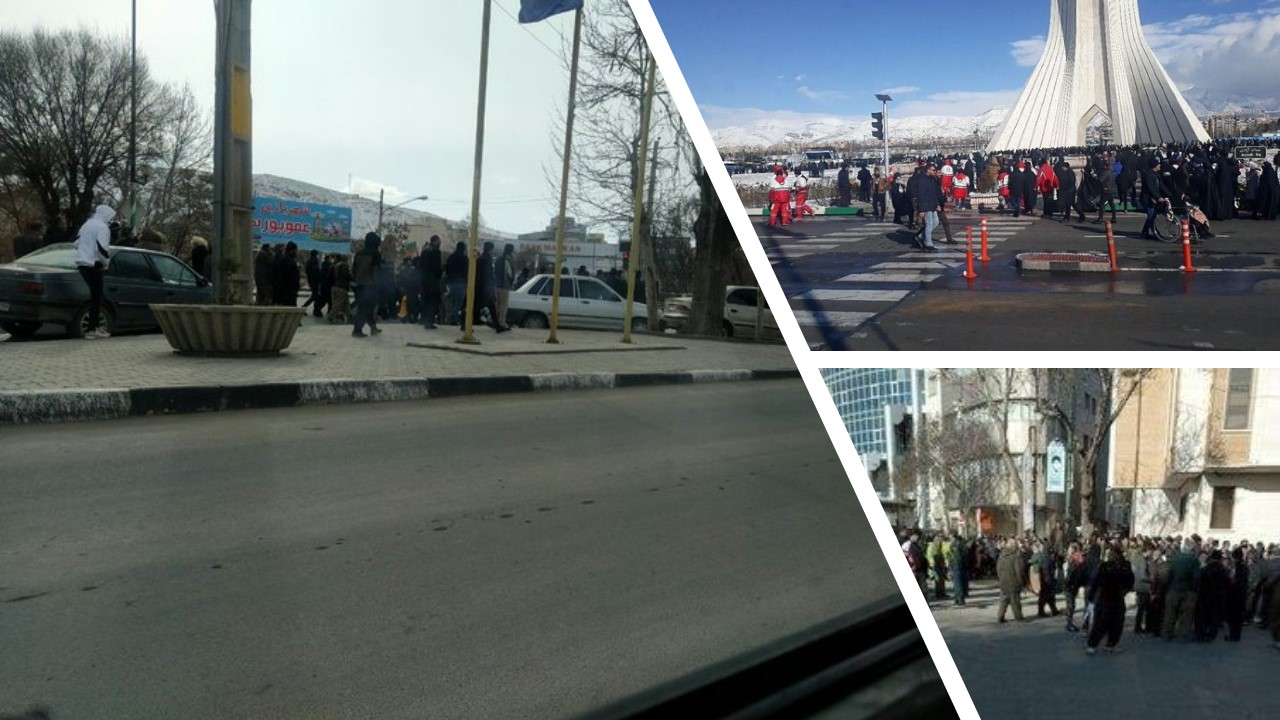 The Iranian regime marked the 41st anniversary of its foundation on Tuesday. To portray a stable and powerful image of the regime, it needed to bring large crowds to the events.

The participants were offered benefits and services such as free transportation and food. Also “background checks,” a required and costly measure for people who want to get employments, were offered by the police.

The streets were blocked to force the crowd to stay in the main procession. All the government employees, students and regime’s armed forces and their families were forced to attend the events.

Yet, despite all its efforts, the regime failed to bring large crowds to cover up the critical state that it’s going through.

As in prior years, international reporting on this celebration seemed to be divided over the topic of how widely embraced the clerical regime’s statements were by the general public.

Mainstream Western media outlets generally described Tehran’s rallies commemorating the 1979 revolution as having attendance somewhere in the tens of thousands. But these estimates fell far short of those that were offered in the wake of a funeral for Qassem Soleimani, the head of the terrorist IRGC’s Quds Force, in the first week of January.

In that case, some outlets parroted Iranian state media in declaring that the funeral had drawn hundreds of thousands, or even more than a million mourners to praise Soleimani’s legacy and condemn the US for killing him in a drone strike on January 3. But questions quickly emerged about the accuracy of that reporting, Iranian opposition groups and other critics of the theocratic dictatorship outlined the operation of government propaganda and highlighted the public demonstrations that seemed to contradict that propaganda both before and after Soleimani’s funeral.

The People’s Mojahedin Organization of Iran (PMOI-MEK) was among the political groups to dispute the regime’s account of that event. Drawing on its extensive intelligence network spanning Iranian activist groups and sources inside the regime itself, the MEKwas able to announce that Soleimani’s “mourners” were largely comprised of government employees for whom attendance had been mandatory, as well as poor citizens who were provided with free transportation to Tehran and other financial incentives in exchange for their role in padding the numbers.

This alternative account of Soleimani’s funeral is part of a broader message from the leading opposition group, which maintains that domestic support for the clerical regime is extremely thin and is routinely overstated in Western media. That message has been reinforced in recent years by popular demonstrations that have been credited with encompassing an unusually broad range of socio-economic groups, ethnicities, and geographic locations.

The regime’s President Hassan Rouhani once routinely referred to in Western media as a “moderate,” used the regime’s anniversary as an opportunity to boast about its self-image as a bulwark against American and European influence in the Middle East. “It is unbearable for the United States to accept the victory of a great nation and that a superpower has been driven out of this land,” he said, referring to the end of US backing for the Iranian government following the Shah’s ouster in 1979.

While such rhetoric might have once been viewed as out-of-keeping with Rouhani’s reputation for a pragmatic approach to Iranian-Western relations, it is actually very much in line with the role that he has played in supporting hardline foreign policy positions. This trend was on display just one day ahead of his anniversary speech, at which time Rouhani delivered remarks on state media praising the IRGC for its development of increasingly advanced ballistic missiles.

Although Rouhani insisted that those weapons are defensive in nature, his commentary was decidedly reminiscent of that which had been offered by Supreme Leader Khamenei in response to the unveiling of the latest model of a ballistic missile, the Raad 500. Khamenei connected the introduction of this weapon to a broader strategy of building up Iran’s military arsenal for the express purpose of suggesting that Iran is strong enough to confront the world’s leading superpower via a direct conflict.

The alignment between Khamenei’s and Rouhani’s public statements on this topic is indicative of a predictable sensitivity about the situation of the regime after the uprisings, it is perhaps surprising that Rouhani and Khamenei are so closely aligned in the run-up to parliamentary elections that will determine the share of power held by their competing factions.

If Rouhani was ever expected to contradict the “hardline” faction, it would surely be now, when the Guardian Council has excluded thousands of candidates, including more than 90 incumbents, from the nation’s ballots. These disqualifications are overwhelmingly targeted at Rouhani’s political allies, giving the hardliners a guaranteed majority even before the voting begins. Yet the president and supreme leader have demonstrated strong alignment over this domestic issue, as well, with both urging widespread participation in an election that is effectively rigged.

And in the wake of those protests, the main opposition group the MEK is boldly predicting an end to the mullahs’ hold on power. In a repeat of past calls for the boycott of national elections, Mrs. Maryam Rajavi, the President-elect of the NCRI has called on Iranians to boycott the polls this month and “vote for regime change.” Despite pressure for a high turnout coming from both factions, even the regime’s official estimates are now anticipating something like 15 percent participation – a figure that is surely incompatible with notions of widespread support for the regime as a whole.