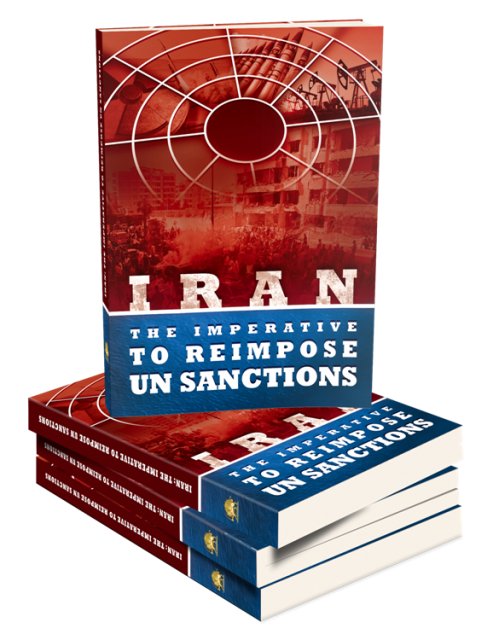 “IRAN: The Imperative to Reimpose UN Sanctions” explores the nature of the Iran regime, its methods of advancing its doctrine of expansion, and how best to respond to the threat that it poses to Iranians, the Middle East, and the international community at large.

The book begins by defining the “modus operandi of the Velayat-e Faqih system,” which lays the foundation for all actions taken by Tehran. It examines how, in that context, the regime procures and manufactures military equipment and weapons, its support for destabilizing forces in proxy battles across the region, and its use of terrorism abroad. The analysis concludes by laying out a cogent policy framework for the strategic necessity of reinstating all UN Security Council sanctions, and presents the perils of inaction for regional and global peace and security if the arms embargo due to expire mid-October is lifted.

The opening chapter discusses the Velayat-e Faqih ideology that underpins the beliefs and actions of the clerical dictatorship, and how it dictates its modus operandi (MO), i.e., to “pursue domestic suppression, export of terrorism and warmongering as core strategies to ensure its survival. The regime uses both weapons of mass destruction and conventional weaponry for suppression at home and terrorism abroad.” To support these efforts, the regime utilizes the Islamic Revolutionary Guard Corps (IRGC) or its terror arms such as the Quds Force.

Next, the question of how the mullahs seek to put their strategy into action is addressed. The continued attempts at procuring and manufacturing weapons and military equipment is examined as part of Tehran’s attempt to export terrorism and warmongering by building cruise missiles and missile gyroscopes. Further, the regime uses roadside bombs, unmanned aerial aircraft and drones, and produces speed boats for use in naval assaults, all methods that highlight its doctrine of aggression and expansion.

Who is impacted by the regime’s export of terrorism and warmongering? The entire region, as well as the people of Iran. The book explores the regional meddling by looking at Tehran’s role and actions in proxy wars across Syria, Yemen, Lebanon, Iraq, and Afghanistan. Additionally, recruitment and training efforts in those countries and some African states are examined, detailing the six month process as well as where these training centers are located.

As the text notes, Iran has a rich culture and history, and the regime doesn’t have the capacity to legitimately govern over such a vibrant people without resorting to brutal internal repression and the spread of extremism abroad. That expansionism, rooted in terrorism, is the next section, covering the regime’s extensive use of terror over the span of the past 40 years. Some of the key aspects are Tehran’s utilization of embassies as a springboard for attacks and to gather information, as well as the key role that the Ministry of Intelligence and Security (MOIS) plays and how they use diplomatic processes in general to their advantage. The text details numerous examples of terrorist attacks across the Middle East as well as the rest of the globe that have been orchestrated or supported by the Iran regime.

One key example is “the assassination of Professor Kazem Rajavi who, on April 24, 1990, was gunned down in broad daylight by several agents of the Ministry of Intelligence and Security as he was driving to his home in Coppet, a village near Geneva. Rajavi’s assassination required enormous resources, considerable planning, and coordination among several of the regime’s organizations. After extensive investigations, Roland Chatelain, the Swiss magistrate in charge of the case, and Swiss judicial and police officials confirmed the role of Iran’s government and the participation of thirteen official agents of Tehran who had used ‘service passports’ issued by Iran’s Foreign Ministry to enter Switzerland for their plot.”

The next examples are more recent, illustrating that over the decades, the nature of the regime has not changed. In 2018, the plot to bomb the Iranian opposition’s rally held in Paris was thwarted, with authorities tracing the attempt back to the regime and its diplomats. Recent threats in Albania are also examined. The Albanian government has provided safe haven to Iranian dissidents, turning  the regime’s eye toward Tirana and leading to an increase in activity at Tehran’s embassy as the regime attempts to gather information and to orchestrate attacks, such as the failed truck bombing in March of 2018 targeting a compound housing about 2,500 Iranian dissidents.

The book then looks at strategies for curbing the regime’s actions and the fallout of misguided decisions, such as lifting the arms embargo, which would only serve to further embolden the IRGC and allow the regime to strengthen areas of weakness related to military capability. Of key note is the widespread support in the US to maintain the arms embargo, as evidenced by various resolutions and calls to action that have bipartisan support in the Congress. The book takes a look at some of the specific calls and resolutions that have made their way through committees and congress, such as Senate Resolution 539 in the Foreign Relations Committee, views that are supported by the Administration’s push for a “maximum pressure” strategy.

The book next lays out the case for reinstating UN sanctions against the Iranian regime. First, a look at the history of infractions committed by the regime, followed by an examination of why there is a need for sanctions and “maximum pressure” by explaining the consistent position of the Iranian Resistance and the impact that sanctions have on the regime.

The book ends with a brief conclusion highlighting eight key points, beginning with the MO of the regime for the past 40 years, the ineffectiveness of previous Iran strategies, and ending with a call for increased action in response to the atrocities committed by Tehran.

In summary, the Iranian Resistance’s position is presented: “Despite the JCPOA and all the concessions provided to the Iranian regime, the mullahs never abandoned their nuclear weapons program. On the contrary, Tehran escalated its nuclear violations, heightened its aggressive behavior in the region, stepped up terrorism in Europe and the United States — particularly against the Iranian Resistance, and cracked down on its population in revolt in Iran.

“The lessons of the past four decades have taught us that an effective and productive policy against the clerical regime must be based on firmness. Denying the kleptocracy access to resources and opportunities, and preventing it from obtaining economic and political concessions, are indispensable to confronting its terrorism and aggression, as well as its attempts to obtain nuclear weapons. To this end, the Iranian Resistance reiterates its long-standing call for the reimposition of the six UN Security Council resolutions sanctioning Iran. Under no circumstances should this outlaw regime have unrestricted access to purchase or sell weapons.”