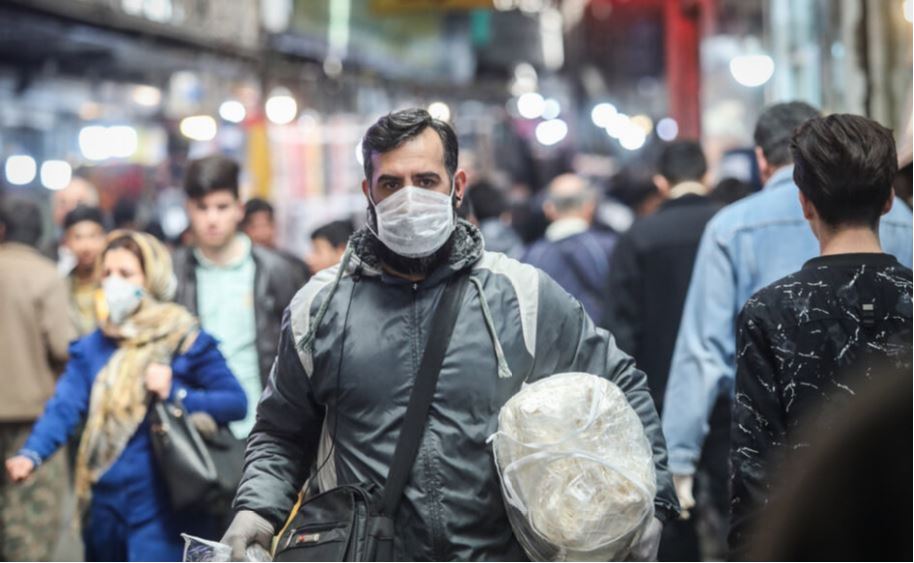 – According to an internal IRGC report, as of April 1, 3926 persons have been admitted to the IRGC hospitals in Tehran alone, including 2,585 IRGC personnel, 695 family members, and 646 retirees.

– Mohsen Rafsanjani, Chairman of Tehran’s City Council, acknowledged that the actual statistics for those infected or victimized with the Coronavirus in the country is much higher than the officially announced statistics.

– Haghshenas, the head of Tehran’s City Council’s health commission said that wrong statistics could endanger people’s lives and cause irreparable damage to people’s lives and property. If the officials do not provide accurate and precise information, they should be held accountable for all these deaths.

According to hospital sources and eyewitnesses, 800 people have died in Shariati Hospital in Tehran from Coronavirus. Due to a large number of patients, they have also laid beds in the basement of that hospital. At Sattari Hospital, 100 people have died due to Coronavirus. According to Ali Maher, a member of the National Coronavirus Combat Taskforce (NCCT), whose remarks were published at the state-run daily, Iran, in Tehran, 138 public and private hospitals in are receiving Coronavirus patients.

Qom Cemetery is facing a crisis due to the high death toll, and the victims are buried outside the city in mass graves.

According to an internal IRGC report, as of April 1, 3926 persons have been admitted to the IRGC hospitals in Tehran alone, including 2,585 IRGC personnel, 695 family members, and 646 retirees.

Despite these stubborn facts, today, Hassan Rouhani, in his series of engineered lies, claimed, “In recent days, the number of (patients referred to) hospitals have been more hopeful than any other day. Both the number of those hospitalized or in a dangerous situation has decreased, and the number of those who have died has decreased somewhat.” “A group of medium-risk businesses, such as shops with rooftops or in bazaars or malls, was scheduled to start operating on May 1,” he added.

Even Mohsen Rafsanjani, the head of Tehran City Council, announced, “The number of Coronavirus cases and victims in the country is much higher than the officially announced figures.” He warned the health ministry about the dangers of lifting restrictions, asked the ministry to provide statistics of the coronavirus victims, and new cases in Tehran separately.

In another development, Haghshenas, the head of Tehran City Council’s health commission told the state-run daily, Asr-e Iran, “The wrong statistics could endanger people’s lives and cause irreparable damage to people’s lives and property, and bring about liability both legally and morally. If the NCCT officials do not provide accurate and clear information, they could be charged with manslaughter and should be held accountable for all these deaths for failing to make the right decision and perform duties properly.”

Meanwhile, today, Samii, director-general of laboratories at the Ministry of Health, whose remarks were published by the state-run Etemad website, acknowledged: “Certain positive cases are those that have been proven by PCR-RT testing, and those that have been hospitalized with acute symptoms are tested. Therefore, patients or deaths that are not diagnosed in this way are not classified as Coronavirus infected, and according to Chinese experience, they include about 80% of the patients.” He also mentioned, “In Iran, about 10,000 tests are performed daily. The number of daily tests in Germany is more than 110,000.”

Today, the state-run daily Arman wrote: “With the reopening of Tehran’s bazaar and high-traffic streets, where there are no restrictions on the traffic plan, a new wave of Coronavirus epidemy will soon break out in the country and threaten the lives of millions of people… Yesterday, Mohammad Reza Mehmandar, Tehran’s traffic police chief, announced that simultaneous with the implementation of ‘smart distancing’ plan the volume of traffic in the country’s capital has almost doubled compared to the same day last year and rose by 35% in total compared to Saturday last week.”

On the other hand, fear of post-Coronavirus developments is rippling throughout the regime. Today, Gholam Ali Jafarzadeh, a deputy of the regime parliament, told the state-run daily, Aftabe-e Yazd, “We have a high unemployment rate in the post-Coronavirus era … We currently have between 3 to 5 million unemployed. Just imagine what would be the situation if another one million is added, especially among the country’s active population.” “There will be a high unemployment rate, closure of small and large enterprises, rise in prices of goods, horrifying inflation rate. We are going to have a terrifying post-Coronavirus era; fever in our sick economy will rise, and we will face a severe economic fever,” he added.

The Aftab-e Yazd daily emphasized, “Iran has billions of dollars in reserves and thousands of billions of dollars in assets in the country that can help the people and the country to reduce the possibility of financial and economic collapse and the risk of deaths by increasing tax on institutions that were exempted for many years. It can adopt measures in hygiene and effective measures in public health, to provide practical support to workers and the weak, deprived, and vulnerable.”The notion to use liquid and capital assets of Khamenei-controlled foundations and institutions in the service of the health and treatment of the Iranian people was first brought to public discussion by the Chair of the National Council of Resistance of Iran, Mr. Massoud Rajavi, in March, at the height of Coronavirus crisis. The issue has now become a hot button topic in public commentaries imposed on the regime’s fearful officials.