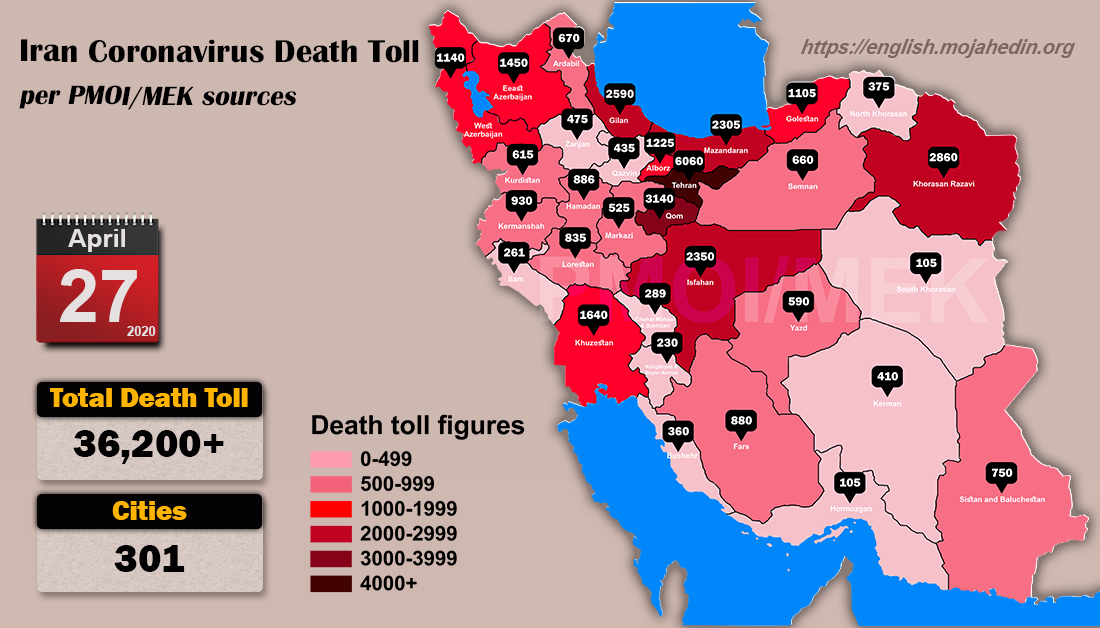 After Hassan Rouhani’s remarks yesterday, the Ministry of Health has declared 127 cities as white zones (clear from virus), but local regime officials in various provinces reject that assessment one after another, stressing that the status is red and alarming.

In Sistan and Baluchestan, the Ministry of Health has declared six cities virus free. Still, Seyed Mohammad Hashemi-Shahri, president of Zahedan University of Medical Sciences, told the state official news agency, IRNA, “The trend of Coronavirus spread in Sistan and Baluchestan has changed alarmingly … The fact is that not only is there no evidence of an end to the virus outbreak, but also we are probably at the starting point of its second peak.”

In Khuzestan, the Health Ministry has declared 12 cities as virus-free zones. Today, however, Seyed Mohammad Alavi, the president of Ahvaz’s Jundishapur University of Medical Sciences told the state-run daily, Behdasht news, “The Coronavirus infection in Khuzestan has increased by 50 percent in the past week.”

Meanwhile, the representative of the Health Ministry in Gilan, told IRNA, “There is no place in the Province that could be considered clear from the virus (White); we are still in danger.”

In Mashhad, the president of the University of Medical Sciences, told the state-run news agency, Tasnim, “The situation in Mashhad has not yet turned white, and the number of people infected with the Coronavirus has increased in the past 24 hours.”

Meanwhile, today, Qom’s Governor was quoted in the state-run daily, Aftabe-Yazd, as saying, “The situation in Qom is not white, and therefore the holy shrine, Jamkaran Mosque, and other mosques will remain closed. Friday prayers and congregations will not be held until the end of Ordibehesht, the second month in the Persian calendar (ending on May 20, 2020).”

In another development, today, Alireza Salimi, deputy chair of the regime’s Health Organization, said that four anesthesiologists have died (due to Coronavirus infection). Salimi quoted in the state-run daily, Behdasht news added: “In one of the hospitals, all seven anesthesiologists have been infected.” Also, Hossein Erfani, head of the Center for Infectious Diseases at the Health Ministry, told Behdasht News, “We are still in the first wave of the outbreak, with an increasing trend approaching the peak of the disease.”

As the Coronavirus crisis continues, the situation of workers and the impoverished is getting worse every day. Today, the state-run daily, Shargh reported, “Out of 82 people tested for Coronavirus at Urmia Petrochemical plant, 37 workers, or 45%, were positive.” According to the official figures, which are much less than the actual numbers, “At least 100,000 workers have lost their jobs in Mazandaran, Golestan, and Lorestan provinces in the past ten days. Nearly 65,000 people in Mazandaran, Qom, Kermanshah, Chaharmahal and Bakhtiari, Mahabad, and Sabzevar have registered to receive unemployment insurance … Construction work is among jobs with zero demand because of the spread of Coronavirus. Thus, in Mazandaran alone, 80,000 construction workers have lost their jobs … Workers cannot afford to pay for many of their basic expenses, including rent, and their daily expenses.”

The state-run daily, Arman, wrote, “Those who had kept some savings in recent years have now run out and are looking to sell their possessions. Many people who are seen in jewelry shops these days are not buyers; they are sellers. They have brought their only possessions to the market to turn it into some cash to make ends meet.”