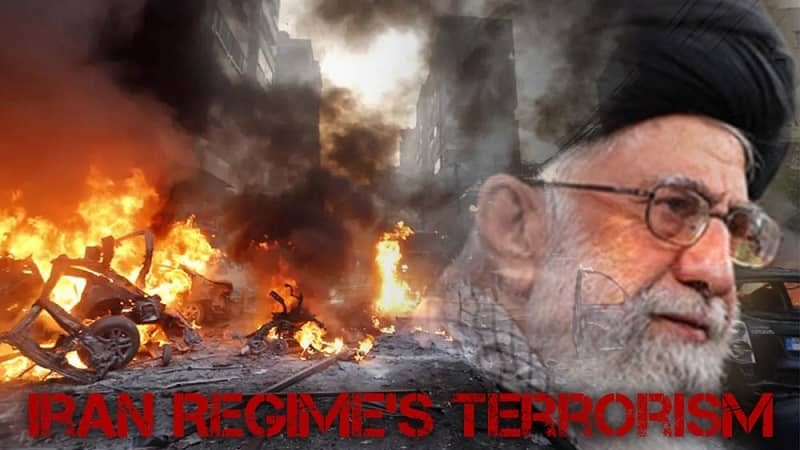 Why plan to blow up Iranian opposition, US and UK politicians, and me should lead to expulsion of Tehran’s diplomats

On 27 November, the trial began of Assadollah Assadi, a senior diplomat from the Iranian Embassy in Vienna, and three other co-conspirators, on charges of terrorism.

The trial continued on Thursday and a verdict is due in late January. Assadi has refused to appear in the Antwerp court, claiming immunity as a diplomat.

On 1 July, 2018, he was arrested and charged with passing 550g of TATP triacetone triperoxide high explosives to an Iranian/Belgian couple from Antwerp. Three days earlier, he is alleged to have given the bomb to Amir Saadouni, 40, and his wife, Nasimeh Naami, 36, instructing them to detonate it at a major gathering of the National Council of Resistance of Iran, attended by tens of thousands of people at Villepinte near Paris, on 30 June 2018.

I was there myself, along with several other Scottish politicians who support the Iranian opposition.

Bomb handed over in Pizza Hut

The court heard four hours of damning evidence from the Belgian prosecutor detailing how the security services had received a tip-off from a foreign security agency alerting them that an attack was being planned. An intensive security operation was put in place and the suspects were closely monitored for months.

On 28 June 2018, Assadi was seen entering a Pizza Hut restaurant in Place d’Armes, Luxembourg, disguised as a tourist, wearing a casual shirt, a fedora hat and with a camera draped around his neck. He was filmed handing Saadouni and Naami a package said to contain the bomb, together with an envelope with €22,000 (£20,000).

For many years Saadouni and Naami had pretended to support the Iranian democratic opposition movement. Naami had entered Belgium in 2010 and registered as an Iranian refugee. Between 2010 and her arrest in 2018, it was discovered that she had travelled to Iran 13 times. It was also discovered that during the same period €106,496 (£96,000) had been deposited in her bank account and over €100,000 (£90,000) in her husband’s, which neither could explain.

Clearly Naami was a spy, working for the sinister Iranian Ministry of Intelligence and Security (MOIS) and her frequent trips to Iran were for training purposes.

The bomb plot was well prepared. Saadouni and Naami had both registered as employees for the Iranian opposition event in Villepinte and Assadi is said to have instructed them to place the bomb inside the main hall, as near to the VIP area as possible, before detonating it from a safe distance, which would have caused carnage.

According to the prosecution, on 30 June 2018, the couple set out on the A12 highway to Villepinte near Paris in their dark blue Mercedes. They were tracked on their journey to Villepinte by agents from the Belgian police who stopped and arrested them in Brussels. Bomb disposal experts discovered the primed bomb in a suitcase in the couple’s Mercedes, hidden in a toilet bag. The bomb exploded as attempts were made to defuse it, destroying a defusing robot and injuring a police officer who was standing more than 100 metres away.

The next day, 1 July 2018, Assadi was arrested by German security when he stopped at a motorway restaurant near Frankfurt. He was travelling back to Austria with his wife and two grown sons. His rented red Ford S-Max was found to contain what was described as a “treasure trove” of evidence, including a notebook with instructions in Farsi (Persian) on how to prime and detonate the bomb. Police research revealed that in the months before the attack, Assadi had travelled frequently to Iran, including one week before the planned attack, to test and collect the device, concealing it in his diplomatic bag on his return to Europe, on a commercial flight to Austria.

‘In the name of Iran’

According to the Belgian state security service, Assadi is a MOIS agent who posed as a diplomat as cover. The MOIS is on the EU and US terror lists.

Jaak Raes, head of Belgium’s state security service, said: “The plan for the attack was conceived in the name of Iran and under its leadership. It was not a matter of Assadi’s personal initiative.”

Assadi has refused to make a statement to the police, apart from threatening that if he is found guilty, armed groups in Iran, Syria, Yemen and Lebanon will retaliate. Lawyers representing the three co-conspirators told the court on Thursday that their clients accepted the damning evidence, but in mitigation stated that “the bomb was only 550g and not very strong”! They said their clients insisted: “Assadi told us that it will not kill anyone and he only wanted to frighten the MEK.”

There is no doubt that orders for this terrorist attack came from the top in Tehran. It should serve as a warning to the West that this is a terrorist regime, whose embassies are used as bomb factories and terror cells. All of Iran’s embassies should be closed and their diplomats expelled, while sanctions against this pariah regime are re-doubled.