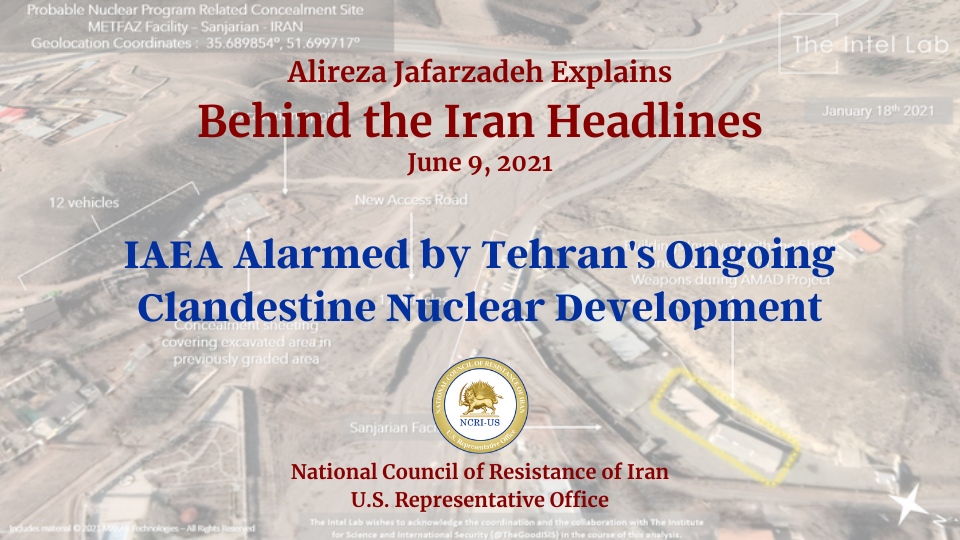 Alireza Jafarzadeh, NCRI-US Deputy Director: This week, the IAEA’s Director General, Rafael Grossi, expressed alarm that after many months, the Iranian regime has not provided the necessary explanation for the undeclared nuclear material particles at any of the three locations the agency has inspected.

According to the new report by the International Atomic Energy Agency, the regime’s enriched uranium reserves are at 16 times the limit allowed under the JCPOA, also known as the Iran Nuclear Deal. The production of 2.4 kg of 60% and 62.8kg of 20% enriched uranium are prohibited by the deal.

All of which clearly confirms that:

Tehran is continuing its nuclear extortion in a bid to have the sanctions vital to its survival lifted, and its missile programs, terrorism, and regional meddling ignored.

Also new satellite imagery about a site near Tehran, known as Sanjarian, shows stepped up work related to nuclear weaponization. This is the site which the National Council of Resistance of Iran first revealed in September 2009 as controlled by an organization called METFAZ, tasked with weaponization. We provided more details on the site in our April 2017 press conference in Washington. As the Iranian Resistance has repeatedly stated, reinstating six United Nations Security Council resolutions against the regime, ending its uranium enrichment capabilities, and anytime/anywhere inspections are imperative to prevent the regime from acquiring a bomb.