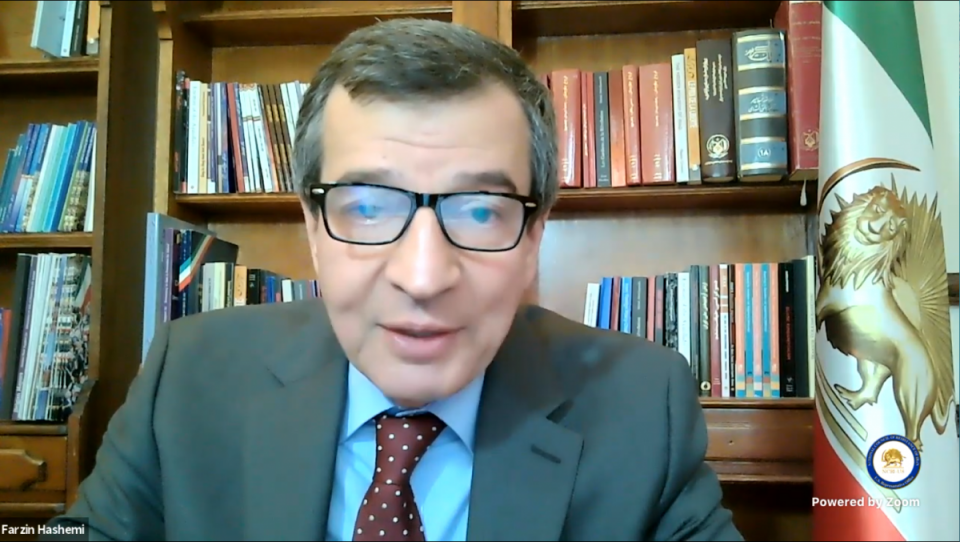 Text of remarks by Farzin Hashemi, deputy chairman of the Foreign Affairs Committee, the National Council of Resistance of Iran, at the NCRI-US briefing to discus the implications of Iran diplomat’s terrorism conviction, February 4, 2021

It is an honor to be with such distinguished panel. As you just said, I had the opportunity to be present during the court proceedings, during the trial both in November and December. And I also had the opportunity to read throughout the 15,000 page file which had been prepared after two and a half years of investigation by the Belgian judiciary, police and authorities.

As it was already said, this was really today is a historic day, and we saw a historic judgment by the court in Antwerp. I say it was historic because of the past two and a half years, the Iranian regime tried hard and took every measure that one could imagine to prevent this trial. First they tried to take legal action by asking for immunity for Assadollah Assadi. They filed in Germany when they proposed extradition of Assadi to Belgium. Then when they arrived in Belgium he again asked for diplomatic immunity. The case went as far as the Supreme Court of Belgium and it was rejected. But they never gave up.

Simultaneous with that there was diplomatic pressure on European governments. And when that didn’t work, Assadi himself threatened the investigative team that if he’s convicted there will be terrorist activities against the interests of Belgium. And indeed, today the judge referred to this statement by Assadi, so apparently that’s part of the ruling that they say one of the defendants has gone as far as evenly threatening with terrorist reprisal if he’s convicted. When that didn’t work, they took another measure and that was taking hostages. Some of the [0:02:30] nationality who have been imprisoned in Iran. And in the last few days when the trial was to start, they announced that one of them is going to be executed. So, everything was planned to exert maximum pressure on Belgian authority and the judiciary to prevent the trial.

And indeed, the day before yesterday there was Parliamentary debate which the Minister of Justice acknowledged that there has been call from Iran for exchange of prisoners, which they had rejected. And today he again, in response to the reporter, made a strong position saying that Belgium is a country governed by the rule of law and we are not going to—and this is a terrorist case and they have been rightly condemned and convicted, and this sent a very strong message to those involved in such activities.

But as Alireza said from the position of Mrs. Rajavi, really what the court said today was confirmation that what we are facing is a state terrorism. and I want to emphasize on that because as you all know for many years, there has been this false notion that the terrorist activities attributed to the Iranian regime are the work of rogue elements, or this or that faction. But what has been collected all the information and evidence in this file clearly shows that the entire regime, the entirety of the regime, were involved based on our own information the decision had been made at the Supreme Security Council headed by Hassan Rouhani and approved by Khamenei, and then it was assigned to the Minister of Intelligence in close cooperation with the Minister of Foreign Affairs to conduct the operation.

And indeed, today the judge went through all these elements, particularly about the role of first the Minister of Intelligence, which he said Assadi is a senior officer of the Minister of Intelligence but he was not acting on his own behalf, everything was coming from Tehran. And indeed, again, the judge said the bomb was made in Iran, it was tested in Iran, and it was brought from Tehran by Assadi to Europe and then delivered to the two other bombers in order to blow up the Free Iran gathering on June 2018. And the judge again emphasized on the fact that this was very crowded rally and had they succeeded, the casualties would have been really high. And he rejected the claims made by some of the defendants that they didn’t know exactly the strength of the bomb or they thought that this is a firework and this kind of excuses. And he said this was a terrorist act with the intention of mass killing. And I think three or four times during this summary of the ruling he emphasized a mass killing and intention to inflict as much casualty as possible. So, the evidence is undeniable.

Also, he referred to investigation done by the Belgian state security services, which they also concluded that this decision or the planning of this terrorist act was done in Iran and Assadi was acting on behalf of the state of Iran, not just his own personal initiative. So, and he went through in fact every single argument that both Assadi’s lawyer and other lawyers have made. With regard to Assadi’s lawyer, which his main defense was immunity, the judge reiterated the decision already made by courts in Belgium and Germany and he said, this is absolutely nonsense. The international law is based on the sovereignty of nations. Vienna Convention doesn’t provide any means for terrorists to engage in this kinds of activities and then claim immunity. Indeed, this was an issue that back in November and December when I had the opportunity to speak to the court, I said to the court that what they’re asking is not immunity, they’re asking for impunity in order to be able to continue with this terrorist activities in Europe.

So, that fact was well-established that it was state terrorism. Another part that he emphasized and it should be part of the ruling, it is part of the ruling, was the fact that how the Iranian regime or how these people used diplomatic privilege as a facilitator for their operation. Which again highlights the fact that within the system, whether you are from the Ministry of Intelligence or Ministry of Foreign Affairs, the tasks are the same. And this I think in my view is a good reminder, particular to the Europeans and however wants to engage in negotiations with this regime, that their interlocutor, Javad Zarif, is the same person who was as a member of the Supreme National Security Council responsible for the decision to conduct this terrorist activity, and as a foreign minister he provided the full facilities of his embassies and diplomatic privileges in order that the operation will be conducted. So that’s the interlocutor of the European and others in the negotiation. So, I think that was well-established during the court today.

And also, another point which the judge referred to was the terrorist network of the Iranian regime. And he said that the network run by Assadi must have been more extensive, because there were others who were on the payroll of Assadi, which is the payroll of the Iranian regime. And h referred to some of the receipts found in the car and confiscated from Assadi, which he had given the monthly salaries of other agents of the regime during that few days trip that he had to Germany, Luxembourg and Belgium. So, that is a very, very important issue which tell us that we’re not talking about terrorism that occurred in the past but we are talking about an operation which is still ongoing because that terrorist network, that terrorist apparatus, is still there, is still operating. Okay, three or four of them have been arrested and convicted of terrorism, but the task of the European countries—and I think the same in the United States, because this network doesn’t just belong to Europe but they have it all over the world, including the United States—I think a major practical task for all governments is to really take this serious and do everything possible to destroy this terrorist network.

And I’ll tell you one thing, in addition to any practical measure, what is very vital is the right policy in order to destroy this network. And I remember, back in 1997, when the court in Berlin in Germany ruled and said that the Iranian regime’s top officials were one way or the other involved in that act, although none of them was sitting on the trial, but for several years the Iranian regime had to back down because they had been warned that if they continued with their terrorist attacks then there will be some tough responses from the European Union. So, I believe now it is important within the United States or Europe to take this matter very seriously and make sure that the right policy is adopted because the experience has been when you make concessions to dictators, particularly the mullahs’ regime, then they will get more emboldened and will continue with their terrorist attacks, whether in Europe, belligerence in the region, or even their nuclear ambition to have nuclear weapons.

So, really I think the judicial system in Europe, in particular in Belgium, they have sort of completed their task with a clear conviction of the four terrorists and clean message that it was not just some rogue elements, some individuals, but the Iranian [0:12:46] that means the Iranian regime who was behind this terrorist act. Now is really the time for European governments, as well as the United States, to take the appropriate position, take the appropriate measures, in order to confront the regime’s malign behavior, whether in the field of terrorism or their human rights violation in Iran. So, having said that, I really believe that this was a turning point and it is time for the world to recognize that this is a rogue regime, this is a regime that is in power only through suppression at home and export of terrorism and extremism abroad, and to recognize really the desire of the Iranian people for regime change by the Iranian people and their own resistance. This is really the only solution for peace and stability in that region because so long as this regime is in power, based on the past experience, nothing would change. However, we hope that with this verdict, now the government would do their part and really put aside the past policy of 40 years and adopt a new policy. I thank you all for giving me this opportunity, but later on if there is any question I would be glad to respond. Thank you. 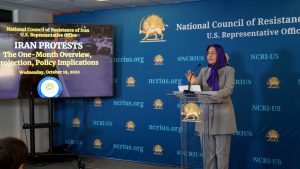 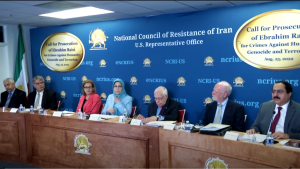 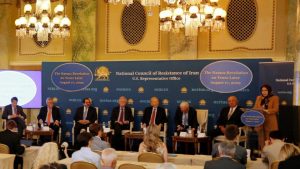